There is something to be said for being a longtime resident. While it does limit ones outlook from a global perspective, it promotes focus on perfecting applicable traits which are close to home. 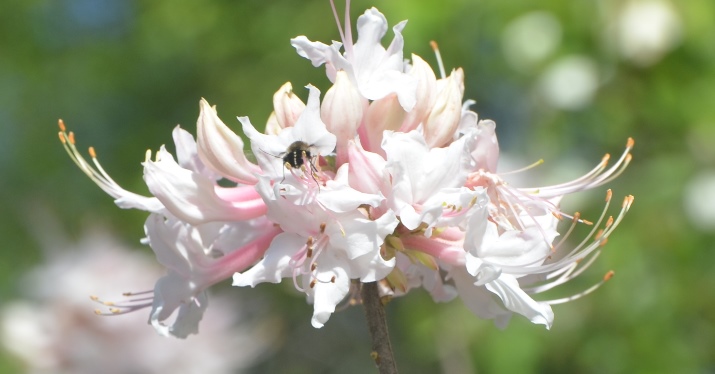 The unique, and very pleasant, environment of north Florida is an excellent example of near perfection on a localized basis.  The weather (within reason), the fauna and the flora are tailored to a superior quality of life, especially the spring blooming native plants.

The human residents of the panhandle can easily see this in a native plant which blooms in the spring.  Wild azaleas make random appearances, but their cultivated cousins from Asia are now the province of retail establishments.

Azaleas are member of the Rhododendron genus which includes flowering shrubs of the same name which grow in more northern latitudes.  Their popularity as flowering perennials has led to the development of more than 10,000 cultivars worldwide which please almost every taste for a profuse and showy burst of color.

These plants have species native to southwest Europe, Asia, and North America. They are believed to date back 70 million years and have an ancestor in common with blueberries and pieris.

Many of the azaleas which grace the yards and gardens in the southeast are traced back to east Asian stock.  These cultivars had been grown for millennia, but reached Europe in the early 17th Century when wealthy estate owners were seeking a new and unique look to their landscapes.

When azaleas arrived in America there were 26 different native azaleas already growing here.  At least four of these grow naturally in Florida and can be presently seen in natural settings, as well as, managed landscapes.

Like the long cultivated Asian varieties, the azaleas native to Florida prefer acidic soils and filtered light.  The can be found in forested areas and near streams or rivers.

The native azaleas are rather scraggly and upright when very young, but will spread out and fill in as they mature. The large, dark green leaves bend the branches gently to form a cascading appearance down to the ground.

A single specimen in a formal landscape should be allowed at least four to five feet of spread to develop into its natural form. These plants are very sensitive to dry soil, but the soil should drain freely of excessive moisture.

A thick mulch of three inches deep is recommended to help ensure adequate root growth when cultivated out of their natural environment. Roots are located in the top several inches, even in well-drained sandy soils, so adequate mulching is critical to success.

Pruning of these natives is seldom necessary except to control shoots extending above the normally mounded shape. Azaleas bloom on the previous year’s growth so any pruning should be done after flowering, but before July.

Mass azalea plantings add a stark color contrast to any landscape. The green background of March and April with clusters of boldly bright blossoms is a striking sight.

The wild azaleas add an enduring continuity to the ever-changing landscape in contemporary life.  Some things should never change, especially in comfortable north Florida.