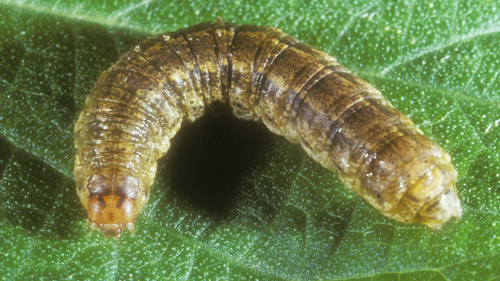 One of the biggest predicaments growing vegetables in my backyard garden is dealing with cutworms. Cutworms are a type of nocturnal moth larvae that feed by wrapping themselves around seedling stems at the soil surface. They then cut the stem of the seedling in two – as if Edward Scissorhands dropped by for a visit – killing the plant. There are multiple species, but one of the most common in Florida is the granulate cutworm (Feltia subterranea). They are distributed most frequently in the tropics but can occur as far north as Southern Canada and regularly occur in the Southeastern United States. 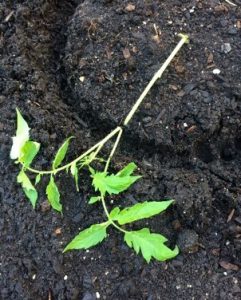 My plan was to install cutworm collars the next morning. But that night, cutworms chewed through the stem of this tomato seedling in two locations. Photo by Molly Jameson.

Since cutworms feed at nighttime it is particularly frustrating, as you will find plants which appeared fine in the evening destroyed by morning. What’s even more frustrating is they feed in multiple seasons on a very wide range of crops, including tomatoes, beans, corn, eggplant, lettuce, peppers, watermelon, celery, broccoli, cabbage, and kale, to name a few. This fall and winter, I even found they had attacked my carrots and onions, which I thought would be more resistant.

One approach a backyard gardener can take in combatting cutworms is to use physical barriers. Netting or row cover can help prevent mature moths from ovipositing their eggs. But if you already have larvae invading, this technique will be ineffective. 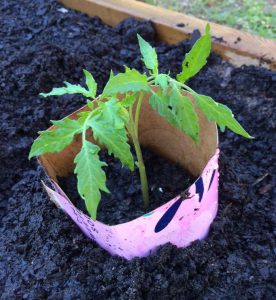 Plants with stems that are less than pencil-width thick are most susceptible to cutworm damage. A useful tactic is to make what are called “cutworm collars.” Surround individual seedlings with toilet paper rolls, taking care not to break fragile stems as you position the rolls over the plants. Materials such as soda cans or cereal boxes can be cut into strips to encircle seedlings if toilet paper rolls are too small to safely fit over the plant. Try to extend the cardboard two inches below and two inches above the soil surface. In this way, the cardboard acts as a barrier, and can help keep cutworms from accessing the stems.

Unfortunately, if cutworms are already hiding in soil close to the plants, the collars might not be effective. Another technique to try, especially if cutworms are already present, is the toothpick method. Place two toothpicks vertically in the soil on each side of the stem. They should be right up against the stem. In this manner, the toothpicks should prevent the cutworm from wrapping around the stem to chew through. 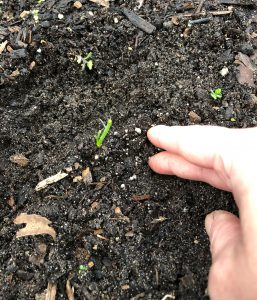 This onion start was given a moonlit haircut by feasting cutworms. If you are lucky, you may be able to find the culprit by digging around the soil adjacent to the afflicted plant. Photo by Molly Jameson.

It can also be helpful to scout your garden for cutworms. Carefully dig one to two inches into the soil near afflicted seedlings. The caterpillars are small, growing from a few millimeters up to less than two inches in length, but tend to stay curled up near the soil surface within about a foot radius of their vegetative victims. Crush any cutworms you find, or for the squeamish, simply drop the cutworms into soapy water.

Applying the bacterial insecticide Bacillus thuringiensis var. kurstaki (Bt for short) may help control cutworms but be sure to apply in the evenings and not before a rainfall or irrigation event, as sunlight and water render Bt useless. And keep in mind, cutworms must digest Bt to be effective, so you may need to apply multiple applications. As with any insecticide, always remember to follow the directions on the label. Once seedling stems grow larger than pencil-width, they should be safe from cutworm mayhem. That is… until the next garden vandal comes along!

To learn more, visit the University of Florida Entomology and Nematology Department’s Featured Creatures page about the granulate cutworm (http://entnemdept.ufl.edu/creatures/veg/granulate_cutworm.htm). You can also search for cutworms on the UF/IFAS EDIS website to learn about additional cutworm species found in our area (http://edis.ifas.ufl.edu/).