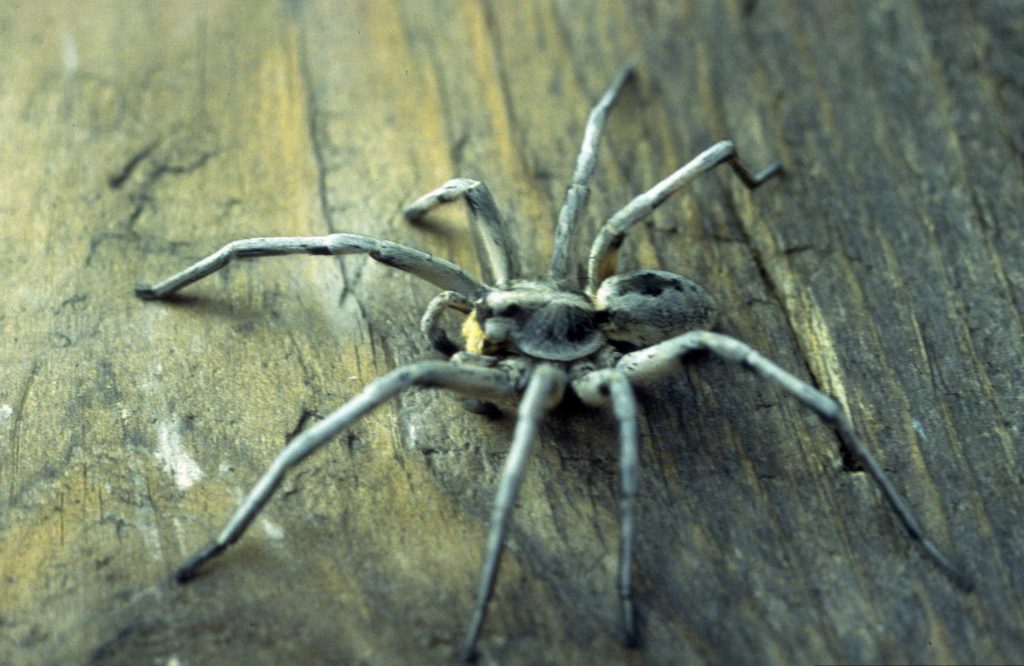 The Carolina wolf spider (Hogna Corolinensis) is the largest wolf spider, measuring up to 22-35 mm. It is the state spider of South Carolina, the only state that recognizes a spider as a state symbol. Photo by Eugene E. Nelson, Bugwood.org.

But have no fear, just as the little werewolves of the neighborhood will be sated by a handful of sweets, a wolf spider will be satisfied once it finds its meal of choice. Wolf spiders are predators, feeding primarily on insects and other spiders. Much like a werewolf, wolf spiders prefer to stalk their prey at night. This is good news for gardeners – as it means you’ll have an insect hunter working for you while you sleep.

Wolf spiders are in the family Lycosidae, and there are over 2,000 species within this family. Lycos means “wolf” in Greek, inspired by the way wolves stalk their prey. Although, unlike wolves who hunt in packs, wolf spiders are very much solitary. These spiders do not spin webs; instead, they keep to the ground, where they can blend in with leaf litter on the soil floor. Some wolf spiders even dig tunnels, or use tunnels dug by other animals, to hide and hunt. 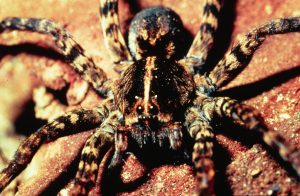 Although most spiders have poor eyesight, wolf spiders have excellent vision, which they use to spot prey. Photo by James O. Howell, University of Georgia, Bugwood.org.

Wolf spiders have eight eyes that are arranged in three rows. This includes four small eyes in the lowest row, two very large eyes in the middle, and two medium-sized eyes off to either side on top. Some of their eyes even have reflective lenses that seem to sparkle in the moonlight. Using their excellent eyesight and sensitivity to vibrations, they stealthily stalk prey such as ants, grasshoppers, crickets, and other spider species. Female wolf spiders, which are bigger than males, may even take down the occasional lizard or frog.

No matter the meal, many wolf spiders pounce on their prey, hold it between their eight legs, and roll with it onto their backs, creating a trap. They then sink their powerful fangs, which are normally retracted inside the jaw, into the victim. The fangs have a small hole and hollow duct, which allows venom from a specialized gland to pass through during the bite. This venom quickly kills the prey, allowing the wolf spider to eat in peace.

Although wolf spiders could bite a person if threatened, they prefer to run away, and their venom is not very toxic to humans. If you do get bitten, you may have some swelling and redness, but no life-threatening symptoms have been reported. Werewolves on the other hand? For these, you’re on your own!