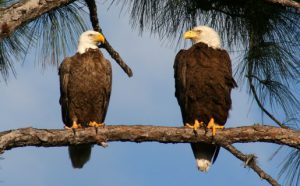 Bald eagles and other large birds of prey have made a comeback in Florida.

Florida has all the elements of a wild animal’s paradise. The state has abundant rain and water sources, lush vegetation, plenty of food, and tons of nesting and hiding places. In our state and national parks, conservation easements, open waters, and acres of ranch land, large populations of animals can thrive. Particularly in areas with fewer people, healthy populations of even large animals like black bears, alligators, and panthers can maintain substantial territories. However, human migration into and throughout Florida is increasing at as steady a rate as ever. Retirees have long fled their cold northern winters to move part or full time to Florida. Now, the ability for many working people to telecommute from anywhere has made it attractive for younger families from all over the country to join us. 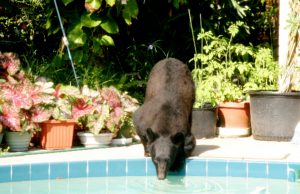 A black bear helps himself to a drink from the swimming pool of a Florida home. Photo provided by Patty Underwood/FWC

With more people comes the need for more housing. Some are content with high rise condos that leave a smaller footprint, but these are often located right on the water and can displace coastal wildlife and vegetation. For the thousands of families moving in weekly, more subdivisions, roads, stores, and schools are necessary. Inevitably, these lead to human-wildlife interactions that may or may not be positive experiences. In fast-growing south Santa Rosa County, I see almost daily reports of large black bears in backyards and trash cans. For smaller mammals, the threat of being hit by a car is unfortunately very common. For nearly every call we get about an exciting manatee sighting, we get word of a nerve-wracking interaction with a snake.  As civilization moves closer to forested, once-wild areas, wildlife can be squeezed out, left without the protection of natural cover and drawn to human food and habitat. 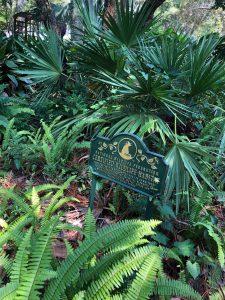 There are plenty of ways we can co-exist, though. A Florida-friendly yard is a wildlife-friendly yard, and those who go the extra mile can even be recognized by the National Wildlife Federation for their efforts. There are several steps one needs to take to become wildlife-friendly. The most important include providing food, water, and cover, so the animals’ basic needs are met. Actions like removing invasive species, keeping pets supervised when outdoors, and adding layers of vegetation are also excellent ways to attract and protect native creatures.

While small and medium sized animals can find shelter in a single yard, it takes neighborhood cooperation to be a haven for something larger, like deer, bears, birds of prey, or large tortoises. Some neighborhoods are designated from the beginning to include conservation easements that serve as amenities to the neighborhood. They include trails, shady waterfront areas, and plenty of space for wildlife. It is important when moving into one of these neighborhoods that each homebuyer understands and respects the purpose behind conservation areas. Residents of older, existing neighborhoods can also work together to designate common areas and stretches of adjoining yards as wildlife-friendly corridors, allowing more animals to use the space safely. 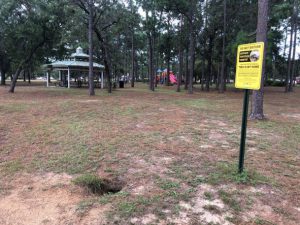 A gopher tortoise burrow is noted by a sign in a local city park. The tortoise is co-existing peacefully with its neighbors! Photo credit: Carrie Stevenson, UF IFAS Extension

In my own neighborhood in the city limits, a gopher tortoise has moved in and become a neighborhood mascot of sorts! When alerted to the presence of its burrow, the city brought in a sign explaining the animal’s protected status and crucial role in the environment. Floridians share their citizenship with thousands of other species. These breathtaking birds, fish, mammals, reptiles, and insects are integral to the health of our land and water. By taking steps to look out for their well-being, we are also providing for our own.