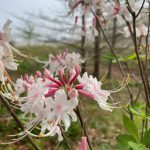 Native azaleas are stunning this time of year.  These deciduous shrubs (and sometimes small trees) often go unnoticed until they bloom in the spring.  Three species native to Florida are the piedmont azalea (Rhododendron canescens), the Florida flame azalea (Rhododendron austrinum), and the swamp azalea (Rhododendron viscosum).  Piedmont azaleas have whitish to pinkish blooms, Florida flame azaleas have yellow to orange blooms, and the white blooms.  All three species have a wonderful honeysuckle-like, sweet fragrance.  All three serve as outstanding focal points in the landscape.

Native azaleas and other deciduous azaleas have varying site preferences.  Like other azaleas, piedmont and Florida flame azaleas prefer moist, well-drained, acidic soils.  However, as the name would suggest, the swamp azalea tolerates wetter locations.  All three species prefer partial shade (morning sun and afternoon shade are best) locations and can grow up to 15 feet tall. 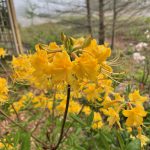 In addition to these beautiful native azaleas, a number of deciduous hybrids have been developed.  Aromi hybrids have been bred to tolerate heat and humidity.  These azaleas were developed from four native species ()from Gene Aromi in Mobile, AL.  He developed more than 100 cultivated varieties (also referred to as cultivars).  Popular cultivars in the market include ‘Centerpiece’, ‘Aromi Sunrise’, and ‘Aromi Sunny-Side-Up’.

Deciduous azaleas do not require a lot of fertilizer.  A controlled release or slow release, acid forming (specifically formulated for azaleas or blueberries) fertilizer is recommended.  A fertilizer nutrient ratio of or close to 2-1-1 (N-P-K) should be selected.  Plants should be fertilized in spring or early summer, never in the fall or winter.

More information on azales, native and nonnative, can be found on the UF/IFAS Gardening Solutions website.