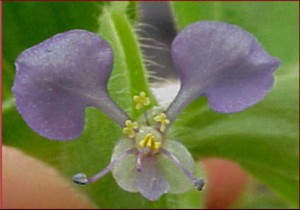 Benghal Dayflower (Commelina benghalensis): Also called Tropical spiderwort, is an invasive weed that creeps into nurseries, lawns, pastures and crop fields.  It was first observed in the early 1990’s in Florida but can now be found throughout the panhandle and central Florida.  This weed is on the Federal Noxious Weed List as well as the Florida Noxious Weed List.  It has been found in California, Hawaii, Louisiana, Georgia, North Carolina, Puerto Rico as well as Florida.

This plant produces above ground and below ground flowers and 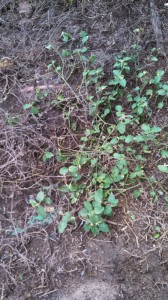 can also propagate via cut stems.  Thus light cultivation and mowing will cause this aggressive weed to spread.  Benghal Dayflower is extremely tolerant of glyphosate.

Benghal Dayflower can be distinguished from other dayflowers in Florida by:

Physical methods sometimes cause infestations to spread rather than controlling them.  There are no know biological control methods, although maintain weed-free ground cover helps out compete the dayflower.  Chemical control methods are dictated by the location of the weed.  If it is in a lawn or pasture, 2,4-D can be used. 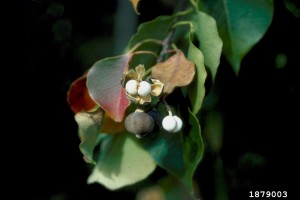 Chinese Tallow (Sapium sebiferum): Chinese Tallow a.k.a. Popcorn Tree: Benjamin Franklin has been blamed for introducing the invasive exotic Chinese Tallow tree to the Southeast when he mailed seeds to a planter after one of his trips to London in the late 1700’s. However, recent DNA work has traced the invasive strain to federal scientists’ importations in 1905.  No matter. The “Popcorn Tree,” as it’s also called because of its white seeds, has invaded the Gulf of Mexico coast from Texas to Florida, especially the wetlands and bottomland forests. A mature tree may produce as many as 100,000 seeds annually. These seeds can be spread by birds or moving water and expedite the trees’ takeover of habitat.

The sap and berries are toxic to humans and livestock. It has been planted for its red fall color, but it crowds out native wetland species such as black gum and red maple, both noted for their red fall leaves. Its tolerance to flooding and saltwater can also make it a threat to bald cypress.

To control this species, small seedlings may be hand pulled, especially in wet areas, but care should be taken to leave no root pieces to resprout. Herbicides including triclopyr can control Chinese Tallow. Larger trees can be controlled by “Hack and Squirt” or “Cut stump” applications and smaller sprouts can be controlled by a basal bark application. These methods of control are described at http://edis.ifas.ufl.edu/ag245 and can be used on other woody pests such as chinaberry or coral ardisia. More information is available at http://edis.ifas.ufl.edu/ag148 and   http://plants.ifas.ufl.edu/node/676.  For local assistance, contact your county UF IFAS Extension office. 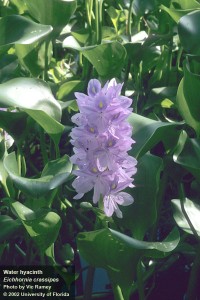 Water Hyacinth (Eichhornia crassipes): The water hyacinth is a floating non-native plant, which if left unchecked and allowed to grow to its maximum potential, can weigh up to 200 tons per acre of water.  Once it gets into rivers, it can choke out other vegetation and make navigation difficult if not impossible, because the plants will grow intertwined and form huge floating mats that can root on muddy surfaces.  Water hyacinth is a wolf in sheep’s clothing—it is a highly ornamental plant.  The plant will be several inches tall with showy lavender flowers and rounded, shiny, smooth leaves.  These leaves are attached to spongy stalks that help keep the plants afloat.  The prolific roots are dark and feathery.  Although here in northwest Florida most of it dies back in the winter, it is able to regrow when the weather and water warm up.  This weed can be controlled by physical removal, through biological control options—water hyacinth weevils will be useful in keeping the plant populations down—and by chemical means.  For more information on hyacinth and other weed control in Florida ponds, please see the UF IFAS publication Weed Control in Florida Ponds.  If you have any questions about identifying a pond weed, contact your friendly local county Extension agent.