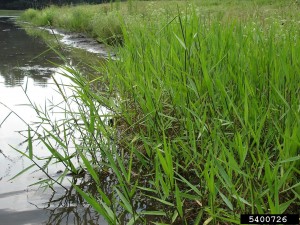 Torpedo Grass: Torpedo grass (Panicum repens) is an invasive weed that invades lawns, flowerbeds, landscapes and wetlands. Even if introduced into a small area, this weed can rapidly spread to become a monoculture and crowd out native vegetation. Its name is derived from the hard, sharp point of the rhizome that looks like a torpedo.

Native to Africa and Asia, Torpedo Grass was introduced to the United States around 1876, primarily through seed used for forage crops. The real infestation came in the early part of the 20th century when the USDA imported and distributed seed for planting pastures as forage for cattle. It proved to be inferior for use as a forage crop. Now it is found in the Gulf South from Florida to Texas and in other coastal areas around the world.

Torpedo grass is nearly impossible to completely eliminate, so management of it is not a matter of how to get rid of it completely but instead how to prevent it from taking over an area. The only way that this can be accomplished is with repeated and frequent efforts. You will have to scout regularly and any time torpedo grass is seen, promptly take action.  Prevention of torpedo grass centers on removal of the entire plant, as the plant can regrow from fragments left behind in the soil.  There are few control options for torpedo grass.  Options will depend on its location and surrounding vegetation.  For management in lawns please refer to http://edis.ifas.ufl.edu/ep387 for specific herbicide controls based predominate lawn species.  For management of invasive species in natural areas, refer to http://edis.ifas.ufl.edu/wg209 for a comprehensive list of species and their controls.  As always, refer to instructions on herbicide label to ensure proper usage.

Hydrilla: Hydrilla is a perennial submerged plant that grows in dense mats up to the surface of freshwater habitats, including ponds, lakes, springs, and rivers.  Growing at the rapid rate 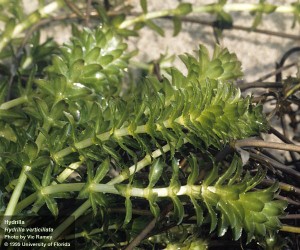 of an inch a day and up to 25 feet long, hydrilla shades out beneficial native plants and clogs waterways, preventing flood control, boating, and fishing.  In dense populations, the plant can alter oxygen levels and water chemistry and survive in a wide variety of nutrient conditions, sunlight availability, and temperatures.

Originating in Asia, it was introduced to Florida (likely through Tampa and Miami) in the 1950’s as part of the worldwide aquarium trade. Hydrilla has become a very expensive problem for the state.  Millions are spent annually on chemical and mechanical treatment simply to maintain the plant.  Adding to the problem is the fact that it is still available commercially, even though it has been placed on the US Federal Noxious Weed List.  In the United States, the plant is found as far north as Connecticut and west to California and Washington.

Methods of control include mechanical harvesters and chopping machines (although fragments of hydrilla left in the water can regrow), introduced insects and fish (particularly the Chinese grass carp), aquatic herbicides, and lake drawdowns. Hydrilla is often transported from one body of water to the other by unknowing boaters moving fragments of the plant left on boats, trailers, or live wells, so learning to identify the plant and cleaning boats before leaving the ramp are helpful in prevention.  Visit the Extension Hydrilla IPM site for more helpful tips.