Warming temperatures have awaken snakes that have been dormant during the winter months.  As a result, they are more active during abnormal times of the day and move more than they typically do while searching for food.  This also means more people are likely to encounter with them.

Even though most snakes are nonvenomous, many people fear them and will go out of their way to kill them if an encounter occurs.  Interestingly, 95% of the humans bitten by snakes are either trying to catch or kill them; suggesting the best thing to do when encountering a snake is to leave it be. 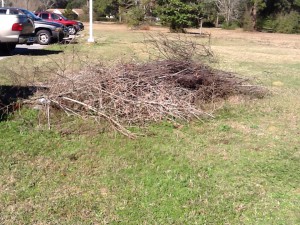 Brush piles such as these attract snakes. These should be kept away from where family members play. They can actually be used to move snakes away from areas where you do not want them. Photo: Rick O’Connor

How can you reduce your chance of encountering a snake?

Most snakes found around the house are either seeking suitable habitat or food.  Anything that could attract rodents or amphibians could attract snakes.  Overgrown landscaping, trash or brush piles, bird feeders, water features, garbage, and greenhouses are examples of snake attractants many people have.  To reduce your chance of an encounter you should move such items away from the house, and for those that you cannot – keep as clean as you can.  Snakes do not like to cross short grass, so a frequently mowed yard helps as well.  If you live near good snake habitat you may have to invest in silt fencing, or a similar product, that has a slick surface which is difficult to crawl over.  If placing silt fencing along the boundary you should have the wooden stakes on your side of the fence; snakes can climb these.

What do I do if I encounter a snake?

The first thing you should understand is that, like most animals, there is a zone around snakes in which they feel threatened.  When they detect you, they react as if you are the predator.  If you are outside their zone they will remain motionless.  If you cross the line, they will try to move away to avoid being attacked.  If they have nowhere to move they will turn and defend themselves; this could mean a strike.  If a snake is encountered, try not to move towards the snake and if you are already close try to give the animal an escape route.  Many will want to know if the snake is venomous.  Of the 46 species and subspecies of snakes in our state only six are venomous.  Of these, five belong to the family Viperidae and can be identified by the elliptical eye pupil, the triangle-shaped head, and the second set of nostrils (pits) on the snout.  These include the three species of rattlesnakes, the moccasin, and the copperhead.  One venomous snake, the Eastern Coral Snake, does not have the appearance of a viper.  The coloration of this snake is red, yellow and black with red touching yellow.  They also differ from their kingsnake mimics by having a black head. 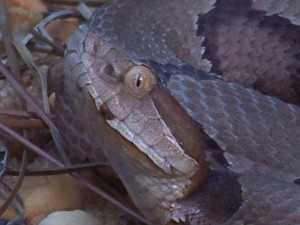 If the unfortunate happens and a snake bites you, the first thing you should do is not get bit twice.  Many people react by trying to kill the snake and multiple bites can happen.  Nonvenomous bites should be washed with warm water and soap.  If the bite is from a viper, remember–do not get bit twice.  With venomous snakes many feel the hospital will need the snake for identification of the proper antivenin.  This is not necessary and, again, could lead to multiple bites.  Viper bites can be extremely painful and, if venom is injected, can induce severe swelling.  You should remove rings, watches, or any garment that may impede swelling.  Many of the traditional first aid treatments for snake bites can cause more harm than the bite.  It is recommended that you hold the bite below heart level if possible and calmly go to the hospital.  Coral snake bites are often undetected but are very serious and medical attention is needed.

As we approach spring, locals should be aware that the Florida Fish and Wildlife Conservation Commission is trying to track three species of local snakes; the Eastern Diamondback Rattlesnake, the Florida Pine Snake, and the Southern Hognose.  If you think you see one of these FWC would like to know.  A GPS mark and photograph is needed.  You can find the log site at FWC’s website: www.MyFWC.com.  For more information on snakes, contact your local County Extension Office. 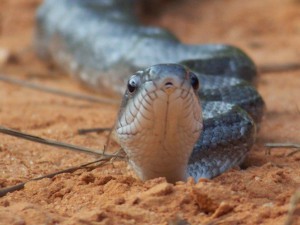 This nonvenmous gray rat snake has a head shaped more like your thumb and the round pupil. Photo: Molly O’Connor