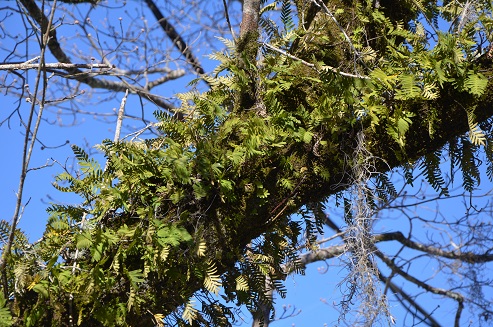 Resurrection ferns are found in many mature hardwood trees in north Florida. This fern is an air plant which prospers on skimpy amounts of water and plant nutrients.

One of the wonderful features of spring is the return of green to the branches of many trees in north Florida. Cypress, poplar, cherry and many others have been defoliated by the cool season which is now retreating.

Buds are breaking everywhere deciduous trees reside and changing the complexion of the landscape. Every day the browns and grays are giving way to intensifying shades of green.

Aside from the pines, magnolias and live oaks, there has been green in the branches of some hardwood trees which went through the winter. Resurrection ferns have remained green in their sheltered perches as the seasons change.

Pleopeltis polypodioides, the scientific name for this native fern, has easily flourished through the recent winter with sufficient moisture. This creeping, coarse textured fern is commonly found in the southeastern United State, but also in some African locations.

It has been commonly identified as a resurrection fern because it has the capacity to survive long periods of drought. During dry times the leaves brown and wither, but the roots and leaves survive by stingily conserving water.

When rains return this fern quickly regenerates by promptly circulating water to the leaves through the plants highly efficient vascular system. To the casual observer, it appears to return from the dead in about a day.

The resurrection fern is an air plant, or epiphyte, which attaches itself to other plants. It receives the necessary plant nutrients for growth from several sources.

Bacterial activity on the outer surface of its plant host’s bark is a major contributor. The outer bark layer of many plants and trees is in the process of being shed and is an ideal location for this fern to grow.

Other tiny particles of nutrients are delivered through rain water and on the breezes. Though meager in life sustaining supplies, the resurrection fern flourishes in this harsh environment where most plants would quickly die.

Though usually located on tree branches, resurrection ferns are sometime seen growing on rocks, bricks or deadfall logs. It is not rare to see this fern growing with another native epiphytic plant, Spanish moss.

This plant’s root system are tiny and shallow, as could be expected of a fern which grows on the outer layer of bark. It uses an intricate mesh of rhizomes which meander just beneath the bark’s surface.

These rhizomes are part of the ferns ability spread along the branches and colonizes new sites on the tree or plant. Periodically the roots will emerge on the bark’s surface and sprout leaves.

The other method of propagation and species preservation is through spores which are produced on the underside of the leaves. Most leaf tips have a mechanism to generate a high volume of tiny wind delivered spores.

During summer and early autumn, the spores ripen and are scattered on the prevailing breezes. While only a tiny fraction make it to a hospitable site, the ones which do quickly establish themselves.

So if 2015 produces a dry or wet summer, resurrection ferns will be here. If only other plants were as easy to tend.