What many have been waiting for… spring is here!  HAPPY EQUINOX EVERYONE!

Today’s photoperiod will be 12 hours of daylight and 12 hours of darkness – equinox.  Many cultures around the world celebrate this and many ancient cultures built great structures to celebrate the event.  It is also a time that many forms of plants and wildlife on our barrier islands begin to awaken and become more active. 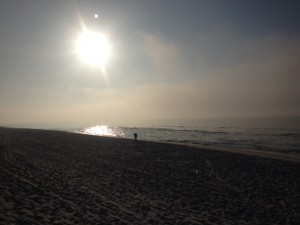 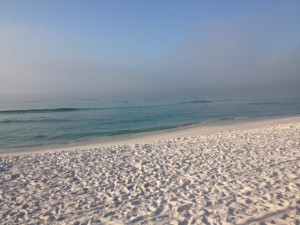 Fog rolling over the Gulf of Mexico in the early morning.

You might remember in our January edition of this series we showed the low angle of the sun over the Gulf on a January morning.  Here we see the sunrise is slightly higher.  The equinox is a special time of year for many.  Moving form the cooler winter temperatures to the milder spring we typically will find water vapor condensing near the earth’s surface forming fog.  This first morning of spring was no different.  As the day warmed quickly the fog “burned off” producing a fabulous sunny warm day for all. 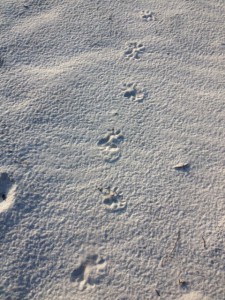 The spread toes of the opossum make identifying this track easier. 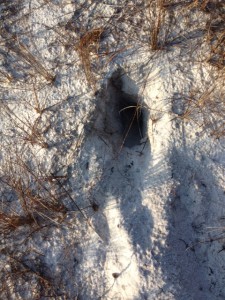 Armadillo digs are evidence of night time insect raid by this animal.

We did not see any live mammals moving across the dune fields but we did see plenty of tracks of the presence.  We could identify at least 4 different types of creatures moving across the dune faces with all sorts of crossing patterns indicating these longer warner days have them moving.  After lying dormant during the colder months it is time to find food, and for some, mates.  Many of the mammals on the barrier islands are nocturnal in habit but may be spotted in the early mornings or late afternoons. 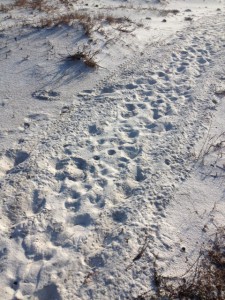 Tracks of an ATV moving across a dune face near the sound side of the island. 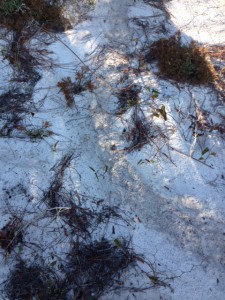 We were not sure whether this ATV track was from an official vehicle checking on something or from a local who did not want to walk all the way to the sound, but we would remind everyone that vehicles such as these are not allowed on the dunes and can cause much damage.  I have been hiking this area for years and this is the first vehicle track I have seen in a long time.  If you are interested in fishing the sound and can not access by boat, there are other locations on the island where the walk is much closer.  Please consider walking there.

We once again we found the “mysterious drag” mark.  Each month since I began this series we have found these drag marks near one of the salt marshes.  Each time it appears that something has either crawled or has been dragged from the water to the top of a small sand ridge and then… abruptly stops.  Not sure… have not been able to find claw marks, tail drags, etc.  Just what you see in the photo above.  We are going to find out though! 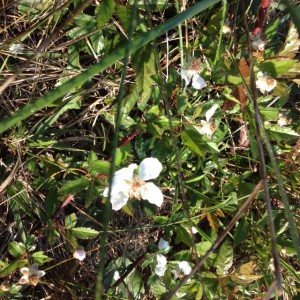 The bloom of a black berry. 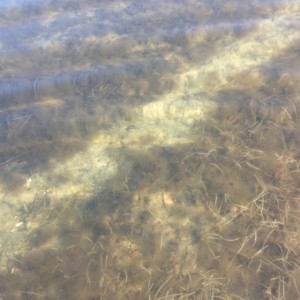 For early spring we did not see many blooming plants.  Last month the beach heather (Conradina) began to bloom, and much of it was in full bloom this month, but the only other bloom we found was that of the dewberry, called blackberry by many locals.  This plant will eventually produce sweet berries which is enjoyed by many animals on the barrier islands… including hikers.

Prop scars are a common site during the summer months and the fact that we saw several today indicate that many are “itching” to get their boats out and enjoy our bay.  Prop scars are problem though.  Seagrasses are an important ecosystem in our local estuaries.  They provide food and shelter for a great variety of marine creatures including commercial important ones.  In general seagrasses have declined in our state over the last few decades.  Causes include increased turbidity, decrease in salinity,  increase in sedimentation (all caused by increase runoff), and damage such as prop scarring.  Many of lawn grasses can grow after being mowed too low but they are, at times stressed and take time to recover.  This is the case with some species of seagrass.  Turtle grass, one of the more common found in our sound, can take several years to recover from severe scarring.  We know that boaters want to “bring her up on the beach” for a day in the sand and sun, but avoiding seagrass beds when doing so benefits the local marine life. 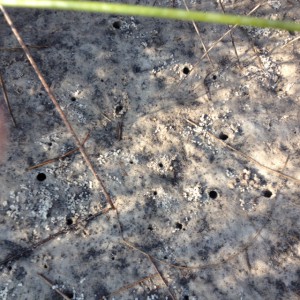 The burrows of fiddler crabs. 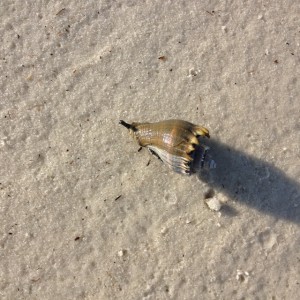 On this early spring morning we did not find a lot of wildlife moving in and near the salt marshes.  Gone were the cannonball jellies we had seen in the winter and there were no dead fish from cold stress on the beach.  We did find the burrows of the common fiddler crab.  These small crustacean digs burrows down to the water table where they end in a chamber.  These chambers are half filled with water and keep their gill chambers moist.  During high tide the fiddler crab will block the entrance of the burrow with sand and wait it out down in the chamber.  When low tide arrives they emerge to feed on organic material within the sand, forming round pellets that resemble coco-puffs, and socialize.  Fiddler crabs are very social and form large groups which remind one of the great herds of buffalo on the plains of the 19th century.  The males have one claw (cheliped) larger than another.  They use this to “wave” at the females and rub their legs to generate sounds to attract her.  They use their small cheliped for feeding.  They are popular prey item for creatures like shorebirds, fish (if they venture into the water), raccoons, and terrapins.

The Crown Conch is a common predator of our bays and bayous.  This snail prefers higher salinities of 20 – 30 parts per thousand, which keeps them in the lower parts of our estuary, but there they are quite common.  This time of year they begin moving along the shallow waters of grassbeds and salt marshes searching for other mollusk to feed on, they will also scavenge dead organisms.  There are separate males and females in this snail who produce a linear string of egg capsules which they attach to seagrass, roots, rocks, or some other structure.  They have their own predators, such as horse conch, who lurk in the deeper waters of the sound.  Their scientific name, Melongena corona, describes their “crown” they appear to have.  These can reach lengths of 8″ but most are much smaller.  The larger ones are known to be cannibals. 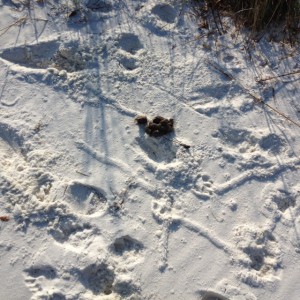 Evidence of dogs on the beach.

The last thing we found on this first day of spring was evidence of dogs running the beach.  Many people are dog lovers, including me, and there are areas on the island where dogs can enjoy the sand and surf.  However they are not allowed on all beaches.  There are several problems with dogs on the beach.  One their feces, like all feces, harbors bacteria and piles such as this can easily be washed into the water.  Increase in fecal coliform bacteria in the water column can be a health concern.  Dogs outside of the areas where they are allowed can kill island wildlife.  This time of year many species of shorebirds begin nesting on the sands of these beaches.  Dogs in the area can cause the parents to fly off the nest leaving the eggs (or hatchlings) exposed to predators and extreme temperature changes.  Many of our island shorebirds are protected species and need our help to assure as many young as possible survive.  Finally, there will be other families following you… who wish to set up chairs and towels and have their kids play in the water and sand… they really do not want to encounter this.  So please let you pet enjoy the beach but in areas where they allow it.

We will see what April brings to the beach.