What can you do about a colony of bats in a building? 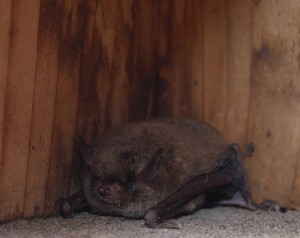 Bats are extremely beneficial, but they can be unwelcome guests when they choose to roost indoors, like this evening bat. Photo credit: LeiLani Davis.

Bats typically sleep during the day in natural structures such as trees and caves. In areas with few natural roost structures, bats may instead choose to spend their days in buildings.

Bats are beneficial because each bat consumes hundreds of insects per night. Bats save farmers billions of dollars annually by substantially reducing the abundance of insect pests. However, they can be unwelcome guests when they choose to live in buildings. The safe, humane, effective way to coax a colony of bats out of a building permanently is through a process called an ‘exclusion’.

A bat exclusion is a process used to prevent bats from returning to a building once they have exited. It is accomplished by installing a temporary one-way door. This one-way door can take many forms, but the most tried-and-true is simply a sheet of heavy plastic mesh screening (with small mesh size) attached at the top and along both sides of the sheet, but open on the bottom. The one-way door should be attached over each of the suspected entry/exit points bats are using to get in and out of the building.

It is illegal to harm or kill bats in Florida, but exclusions from buildings are allowed if you follow practices recommended by the Florida Fish and Wildlife Conservation Commission (FWC). According to Florida law, all bat exclusion devices must be left in place for a MINIMUM of 4 consecutive nights with temperatures above 50 o F before each entry point can be permanently sealed to prevent re-entry by bats. Also, it is unlawful in Florida to attempt to exclude bats from a building between April 15 and August 15, which is bat maternity season. This is when female bats form colonies and raise young that are unable to fly for their first few weeks of life. If bats were excluded during this time period, young bats (called pups) would die indoors.

For more information on how to conduct a bat exclusion, check out this video that features interviews with bat biologists from the University of Florida, FWC, and the Florida Bat Conservancy: How to Get Bats out of a Building.

Remember, bat maternity season in Florida runs from April 15 to August 15. If you have a colony of bats roosting indoors that you want to exclude, you must either act quickly or else wait until the middle of August to coax them out.