Why Do We Often See and Smell Smoke This Time of Year? 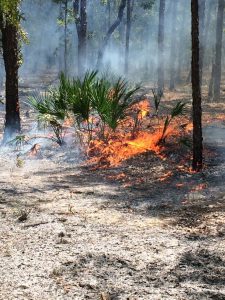 A prescribed fire burns safely in a natural area. Photo by Holly Ober.

Most plant and wildlife communities in Florida are adapted to periodic fires. For thousands of years, fires were ignited naturally, and frequently, by lightning. In fact, Florida has the greatest number of lightning strikes of any state in the country. About 1,000 lightning-set fires are documented in Florida each year.

Today, due to the many people living in Florida, the vast majority of fires naturally ignited by lightning are quickly suppressed by trained personnel. This is done to reduce the loss of human life and property. Although helpful to human safety in the short term, suppression of fire from natural areas for long periods of time can be problematic for all the native plant communities and wildlife that are adapted to periodic fire, and ultimately dangerous for humans as well. The longer our natural areas go unburned, the greater the accumulation of vegetative material that could serve as fuel for fire, and the greater the possibility of uncontrollable wildfires devastating natural areas, homes, and buildings when lightning strikes.

PRESCRIBED FIRES are an important tool: they are a safe alternative to wildfires. Prescribed fires are intentionally set under favorable weather conditions with the goal of stimulating the ecological benefits produced by natural wildfires. By selecting safe conditions for these burns and by preparing for them in advance by creating barriers to halt the spread of fire past desired borders, trained personnel have much more control over the results of these fires. The reason we often see and smell smoke in the spring is because this is the most popular time of year to use prescribed burning as a forest management tool.

Below are some of the benefits fire provides to the health of the many plants and wildlife that naturally occur in our state.

To learn more about prescribed burning in Florida, visit https://www.freshfromflorida.com/Divisions-Offices/Florida-Forest-Service/Wildland-Fire/Prescribed-Fire