The week prior to Halloween is officially designated as National Bat Week. In honor of this event, it’s worth considering some of the benefits bats provide to us.

Did you know there is a species of bat that lives nowhere in the world but within our state? It’s called the Florida Bonneted Bat, and occurs in only about 12-15 counties in south and central FL. These bats are so mysterious that we’re currently not even sure exactly where they occur. They are so rare that they’re listed as a federally endangered species. 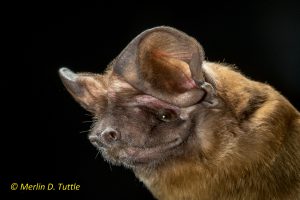 These bats were named for their forward-leaning ears, which they can tilt forward to cover their eyes. With a wingspan of 20 inches, they are the largest bats east of the Mississippi River: only two U.S. species are larger than they are, and these both occur out west.

We have been investigating the diet of Florida Bonneted Bats. To do this, we captured bats in specialized nets, and then collected their scat (called guano). Next, we processed the scat in a laboratory using DNA metabarcoding to determine which insect species the bats had recently consumed.

We found that the bats eat several economically important insects, including the following:

These insects are pests of corn, cotton, peanut, soybean, sorghum, tobacco, tomato, potato, and many other crops.

Furthermore, the bats did not eat these insect pests infrequently. In fact, 86% of the samples we examined contained at least one pest species. On average, each sample contained three pest species! This tells us that Florida Bonneted Bats should be considered IPM (Integrated Pest Management) agents.

Currently, a new student has begun investigating the diets of bats more commonly found in northern Florida, southern Georgia, and southern Alabama. By the time Bat Week 2019 rolls around we’ll have details on which insect pests these bats could eat on your property.

If you’re interested in helping bats or incorporating them into your Integrated Pest Management efforts, consider creating roosts for them (places where the bats can sleep during the day). Bats roost not only in caves, but also in cavities in trees, in dead palm fronds, and in bat houses.