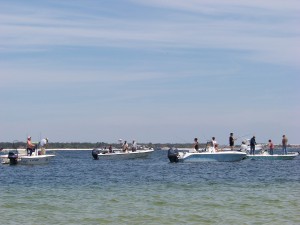 Boating is a very popular activity in the sunshine state.
Photo: Rick O’Connor

Okay… Let’s start at the beginning. We began drilling oil over 100 years ago. The crude was refined into kerosene, gasoline, plastics, and other products that have completely changed our lives. A huge international industry developed from the drilling and employed who knows how many people. But then a few problems began to emerge…

The emissions from burning oil have added compounds to our atmosphere that have contributed to human health issues and have changed the climate. As the human population grew the demand for this energy source grew, and the problems grew as well. One of the first steps made by the governments and the industry to curb the problems was the removal of lead from gasoline. At first this was problematic because many of the internal combustion engines that ran on gasoline did not run efficiently on unleaded and a back-lash occurred. Service stations offered both leaded and unleaded at the pump and motorist could choose. The car industry followed by developing engines that ran on unleaded only and eventually leaded gasoline was no longer offered. Since the phase out the blood lead level has dropped from 88% of children in the United States to 1% in 2006 (www.worstpolluted.org).

The next issue was the amount of oil. Though many text list fossil fuels as a renewable energy, it takes millions of years to renew it – so in the time frame we think of it is basically a non-renewable resource. With a finite amount of oil available the industry began looking for new sources of oil and encouraging the public to conserve their use. The government answered this by requiring the car industry to produce fuel efficient automobiles, which they have. My original truck got between 8-12 mpg, today’s trucks can get over 20 mpg. Smaller, more efficient engines that burn unleaded gasoline have certainly improved some of the problems. 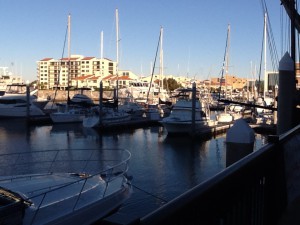 One of many marinas in Florida where boats fuel.
Photo: Rick O’Connor

However the population continues to grow. I remember just a few years ago everyone was amazed when we hit 6 billion humans, we are now at 7.2 billion and the clock moves quickly (http://www.census.gov/popclock/) . The largest growth has been in China and India. Both of these nations have experienced huge increases in their economy and quality of life. As their economic status improved their demand for energy increased and concerns about the amount oil demand increased. With the somewhat finite amount of oil, and the compounds that are still part of the emissions. Many became concerned about what would happen with growth in that part of the world. One answer to both emissions and amount was to begin searching for alternative fuels. Biofuels was one option. These fuels can be generated from plant material, which can produce ethanol. There are certainly some problems with growing corn for fuel instead of food but this is one option that the industry began to explore. Just as the original engines had problems with unleaded fuel, today’s engines have problems with ethanol. The engines that power the Indy and Formula 1 race cars do use biofuels but who can afford a Formula 1 engine? The industry’s response was to blend ethanol into the existing unleaded gasoline and offer this. The hope was that the global amount of gasoline could be conserved using this method. The original fuel was 10% ethanol and was called E-10 fuel. As expected problems occurred. Though the engine ran pretty efficiently if the fuel was used in a relatively quick period of time, and not allowed to sit within the tank and fuel lines, the ethanol began to degrade parts. Pieces of rubber and plastic blocked fuel lines causing all sorts of problems. I personally experienced this issue with my outboard motor. The outboard industry responded by developing more E-10 friendly engines and additives you can use if your fuel will be sitting in the tank for long periods of time. It is currently recommended that if you are not going to use your lawnmower or outboard over winter that you fill the tank for storage. Ethanol breaks down and water is produced. With a full tank there will be less water accumulation over time. Now comes E-15.

Yep… E-15, 15% ethanol. Though this move will eventually improve some of the problems with using oil there will be, as there have been, some growing pains. IT IS NOT RECOMMENDED THAT OUTBOARD MOTORS, LAWN CARE MOTORS, OR ANY OTHER SMALL ENGINE, use this E-15 fuel. It is currently being offered at service stations but in many cases is NOT clearly marked. All boaters, lawn care operators, and anyone else who uses small engines should check the gas pump labels carefully before fueling.