Bringing the Indigo Back to the Panhandle

With great interest I read this week that the Orianne Center for Indigo Conservation in central Florida has begun a project to reintroduce the federally listed Eastern Indigo Snake (Drymarchon corais cooper) to the Florida Panhandle; where there have been no verified sightings since the late ‘90s. 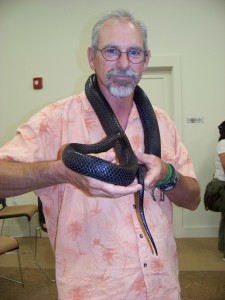 The eastern indigo snake is the largest nonvenomous snake in the southeast.
Photo: Molly O’Connor

The Eastern Indigo is the largest nonvenomous snake in the southeast, reaching lengths of eight feet.  They prefer sandhills and dry upland areas such longleaf pine forest.  The males can patrol areas as large as 3000 acres and are associated with gopher tortoise burrows.  Being large snakes they feed on a variety of animals including venomous rattlesnakes.  The loss of habitat, along with the decline of gopher tortoises, triggered the decline of this species, and they are rarely seen in the western portions of the range.  Indigos are most often found in southern Georgia and peninsular Florida, but sightings at these locations are not common.

The Orianne Center is currently raising young Indigos for release in the Nature Conservancy’s Apalachicola Bluffs and Ravine Preserve.  They are planning to release 20 snakes there and an additional 30 in the Conecuh National Forest to support a similar project that Auburn has been doing for the last four years.  These snakes are pretty easy to identify.  They are iridescent black, usually having an oily sheen appearance to them, with orange coloration on the lower jaw.  Oh… and they are big… 8 feet.  We are hoping panhandle residents will not be alarmed if they encounter one and allow them to move along.  During the last four years of Auburn’s project they have lost quite a few to cars and one visited a youth camp in the National Forest.  Alarmed at first the residents soon learned that they were feeding on copperheads in the tool shed and have since loved having these snakes around.

You can read more about this project and the Orianne Center at: