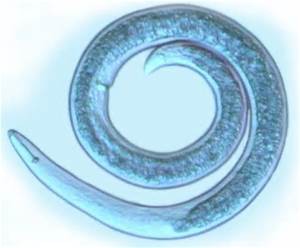 The round body of a microscopic nematode.
Photo: University of Nebraska at Lincoln

In the first article of this series we discussed the how unpleasant the subject of worms were but how beneficial many species are to our environment. We highlighted the flatworms and this week we will look at the roundworms.

There are a variety of round-shaped worms but the term “roundworm” is usually associated with the Phylum Nematoda; and more commonly called “nematodes”. There are over 10,000 species of nematodes on our planet and they are found in all habitats from the polar region to the tropics and even in deserts. They are found in freshwater and marine systems and are quite common in soils. Within an acre of land there could be literally billions of them.

As the name suggests their bodies are round, not flat, and smooth, not segmented; which separates them from the other two groups we are writing about. Most are very small (< 2.5mm – 0.10”) but some may reach 5cm (2”). Most are carnivorous, some even consume fleas in your yard, but others graze on algae, and others detritus. Many species have a stylet (needle) they use to puncture the cell wall of their prey to consume the internal organic matter. They do not have a developed brain but they do have a series of nerves that run throughout their body. Most are connected to exterior structures associated with the sense of touch, such as setae. There are generally male and female worms in this group and the males are typically smaller in size. However hermaphroditism does exist.

As with most groups of worms, it is the parasites that we really dislike – and there are plenty of parasitic nematodes. They infest a lot of different species. Some live on the outside of plants while others live on the inside. Some are parasitic only at the adult stage, some only as a juvenile, others begin within invertebrates and move to plants as adults. They typically exit one organism through the feces and infest another when the feces is consumed by another.

The life cycle of the human hookworm.
Center for Disease Control

Many species of nematodes have a primary and secondary host life cycle, similar to the flatworms, but others complete the entire life cycle within one organism. Hookworms, a common nematode found in humans, enters the body and feeds on blood cells. The young larva live in the environment and can for a few days in good conditions. When they contact a human they penetrate the skin and move through the circulatory system to the lung. Here they burrow into the bronchioles (airway) and work themselves to the pharynx where they are swallowed by the host and eventually end in the intestine. Within the intestine they feed on blood cells within the intestinal wall. When they reproduce the eggs are released within the feces and enter the environment. If conditions within the environment are good the eggs will hatch and the cycle begins again. Pinworms and whipworms are also parasitic nematodes that infest humans.

Though we dwell on the negative aspect of the parasitic nematodes many species are used indicators of soil health and can give farmers a better idea of the condition of their soil. Suggesting to them what to plant or what they need to do to condition their soil to plant a specific crop.

Next week we will look at the most familiar of the worms – the segmented ones.