National Estuaries Week! – What is an Estuary?

Welcome to National Estuaries Week! Each year in the fall NOAA and other agencies try to educate residents about estuaries. The vast majority of humans on our planet live on, or near, an estuary – many not realizing the importance those bodies of water have on our economy and quality of life. We live on them, consume food from them, swim in them, recreate on them, and maybe make your living from them. They are an integral part of our lives and many are under stress. Over the next seven days we will post articles discussing some of the benefits and problems our local estuaries are having. Let’s begin with What is an Estuary?

An estuary… where rivers meet the sea.
Photo: University of California.Berkley

Estuaries are defined as semi-enclosed bodies of water where fresh and salt water mix. Typically freshwater enters at the head of the bay. In the Florida panhandle most of our estuaries are fed by one of two types of rivers; alluvial and tannic. Alluvial rivers are large, fast flowing streams that begin far up in the watershed (Georgia or Alabama) and typically are quite muddy; Escambia, Choctawhatchee, and Apalachicola Rivers are examples.

Tannic rivers are generally smaller in size, flow slower over coastal flatwoods, and build up tannins from the decomposition of leaf litter that settles to the bottom due to the slow currents. Due to the high levels of tannin, these rivers general have a lower pH and “blackwater” “ice tea” coloration to them; Blackwater and Perdido Rivers are examples.

Freshwater from these rivers is less dense than seawater and tends to flow across the surface of the bay towards the mouth of the bay; where it meets the Gulf of Mexico. There are several types of estuaries found around the world and the ones in our area are drowned river valleys. They formed when ice from the last glacial period melted and flowed towards the sea. As they reached the coast areas of “low land” filled with water and became bays. Drowned river valleys typically are very wide and very shallow. Mobile Bay is 35 miles long, 10 miles wide, and not much deeper than 11 feet across its area. I remember as a kid scalloping in St. Joe Bay and being able to stand up at distance from shore that I could barely make out my car! 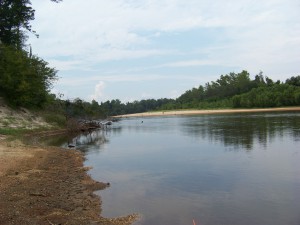 The Escambia River. One of the alluvial rivers of the Florida panhandle.
Photo: Molly O’Connor

As seawater enters the bay it tends to remain near the bottom and will “finger” it’s way towards the head forming two layers of water within the bay; freshwater on top – seawater on the bottom. This “fingering” movement is called a salt wedge and forms a halocline which impacts the distribution and diversity of aquatic species. On windy days the top and bottom layers will mix and the salinity of the bay becomes more brackish with no noticeable halocline; this too will impact the diversity and distribution of aquatic life. Creatures who live in estuaries must be hardy and prepared for drastic environmental change over the course of the day.

In the Florida panhandle our estuaries experience diurnal tides; 1 high and 1 low tide each day. The incoming tides are generally weaker than the outgoing ones; I have, more than once, been caught in an outgoing tide in Pensacola Bay… VERY difficult to swim out of. 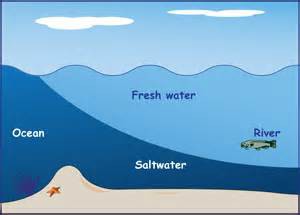 We have seven estuarine systems along the Florida panhandle; Perdido, Pensacola, Choctawhatchee, St. Andrew’s, St. Joseph, Apalachicola, and the Apalachee. Each is unique and important to their communities and provide benefits that are truly priceless. Enjoy the other articles we will post during National Estuaries Week and GO OUT AND ENJOY YOUR ESTUARY! It’s the perfect time of year for it.