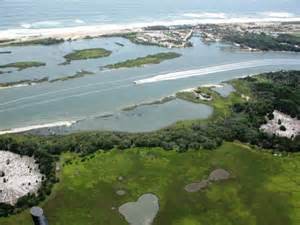 As we come towards the end of National Estuaries Week we will now look at some issues our estuaries are facing. Sea level rise is one that generates a variety of responses from the public. For some it is of concern, something we need to be planning for and need to spend more research dollars on to improve our models to understand it. For others, it is a problem for the back burner; yea, it is happening but the changes are over a long period of time and the serious impacts will not occur for a while – and we have more pressing issues to deal with. The old “it’s not a problem until it’s a problem” form of planning. Others still understand it but do not believe the models and do not believe the impacts will be very serious – thus warrants little or no planning. And there are those who do not believe climate change and sea level rise is actually occurring. They see no tangible evidence of any changes. Each year feels like the last – it just is not happening.
A couple of years ago I was part of a team that conducted a series of focus group meetings with residents and businesses who live and work on our barrier islands. The focus of the discussion was to determine what the coastal residents were most concerned about in terms of climate change, sea level rise, and coastal resiliency. The majority of the participants did not deny climate change but were not concerned about planning for it at this time; they had other issues were more pressing… like coastal flooding and the national flood insurance plan – which plans to increase rates for properties in flood prone areas. Ironically, this issue is tied to climate change and sea level rise. They were more concerned about it than they realized. And we did have a few who asked the question – “is there any science that supports the notion of climate change?” Let’s start there… is there any science to support this?

Yes… this link to NASA (http://climate.nasa.gov/evidence/) is a page developed to help the public better understand what the science says about this. Yes, there is evidence that the carbon is increasing in our atmosphere, that global temperatures are rising, as are sea levels. Many are experiencing some of the changes that were discussed in the 1980’s. Some areas are seeing more rain, others more drought. Gardeners in parts of the country are noticing that things they use to do in April, they now do in March. More tropical plants and animals are migrating north – there are at least three records of red and black mangroves growing the Florida panhandle and a snook was caught a couple of years ago at Dauphin Island, Alabama. These subtle changes have been noticed by some. Others, such as those in southeast Florida, have witnessed more direct evidence, such as portions of A1A going underwater during extreme high tides. But there is science to support this. 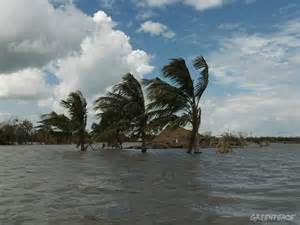 Islands in the south Pacific who are dealing with the impacts of sea level rise during storm events.
Photo: Greenpeace

What is causing sea level rise?

Well, according to a document published by Florida Sea Grant there are three general causes.

What do the current models predict for future sea level rise?

Most of the models are predicting an increase between 1.5 and 4.5 feet, depending on where you are, by 2100.

Again some coastal communities are experiencing impacts now. South Florida Water Management District is currently replacing all of their gravity flow drains due to the fact that sea level has risen enough that they only work at low tide. Monroe County (Florida Keys) is now replacing their vehicles at a faster rate due to constant driving through salty flood waters. Many Florida coastlines are now experiencing saltwater intrusion of their freshwater supply. This is partially due to the over consumption of that resource but it is also due to sea level rising introducing salt water to these systems. There has been increased flooding in many parts of the country, including the Florida Panhandle.

So what does this mean for our local estuaries?

As we have said, sea level rise has occurred before – will this be a problem for our estuarine habitats? Generally ecosystems adjust to environmental change over time but they cannot respond if these changes occur too fast. Scientists have determined that an increase of 0.13” of sea level/year will flood our coastal marshes and we may lose them; currently the rate is about 0.11”/year. It is believed that our barrier islands will “roll” landward but science is not sure how fast this will happen. There may be changes in species composition within our estuaries – which could be good or bad – and there is certainly room for the expansion of invasive species. 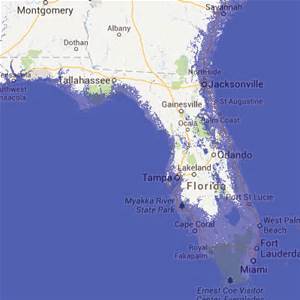 How has government responded?

Federal and county governments have responded – the state… not so much. According to Thomas Ruppert (Florida Sea Grant) the local governments have done the best job planning for these future changes. Many areas in the state now require some form of sea level rise planning in all new development projects. At the very least coastal communities should look at future development plans and think long term as to where flooding may become a bigger issue.

“The times they are a changing…”