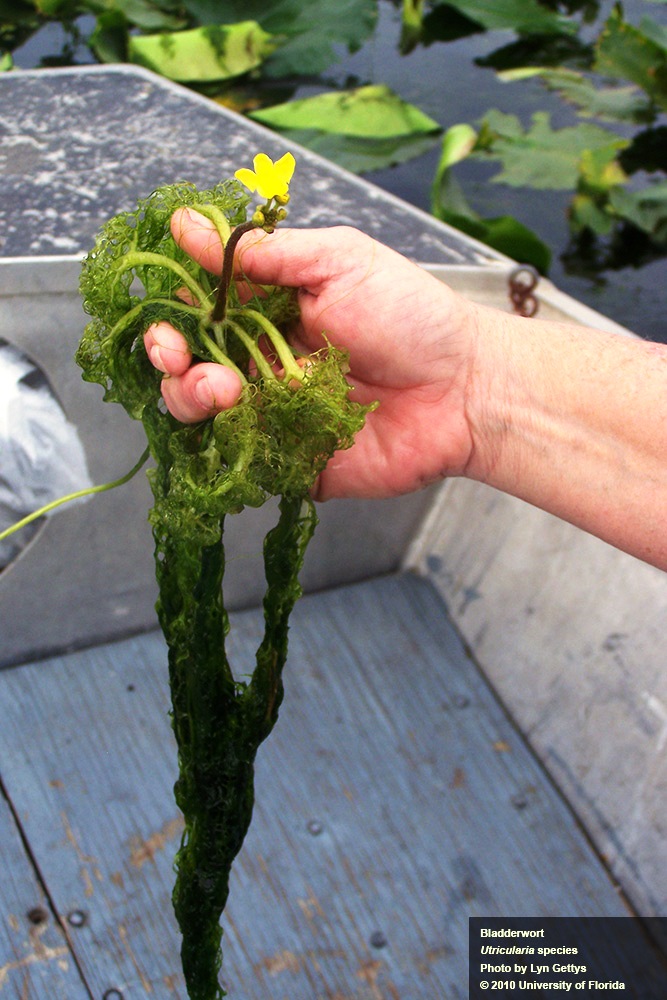 DId you know that Florida is home to 14 species of aquatic carnivorous plants called “bladderworts?” This one is Utricularia inflata. Photo by Lyn Gettys

I don’t know about you, but living in “La Florida” – “the land of flowers” (the Spanish translation of Florida – named in 1513 by Spanish explorer Juan Ponce de León) makes it difficult to have a short list of favorite plants.  While I do have a number of plants in my “favorites” list, carnivorous plants are always at the top in the “wow, is that real?” category!  Many people have read about, or have seen the carnivorous pitcher plant communities in Florida panhandle bogs, meadows, and seepage slopes, but did you also know that Florida is home to 14 species of aquatic carnivorous plants called “bladderworts?” 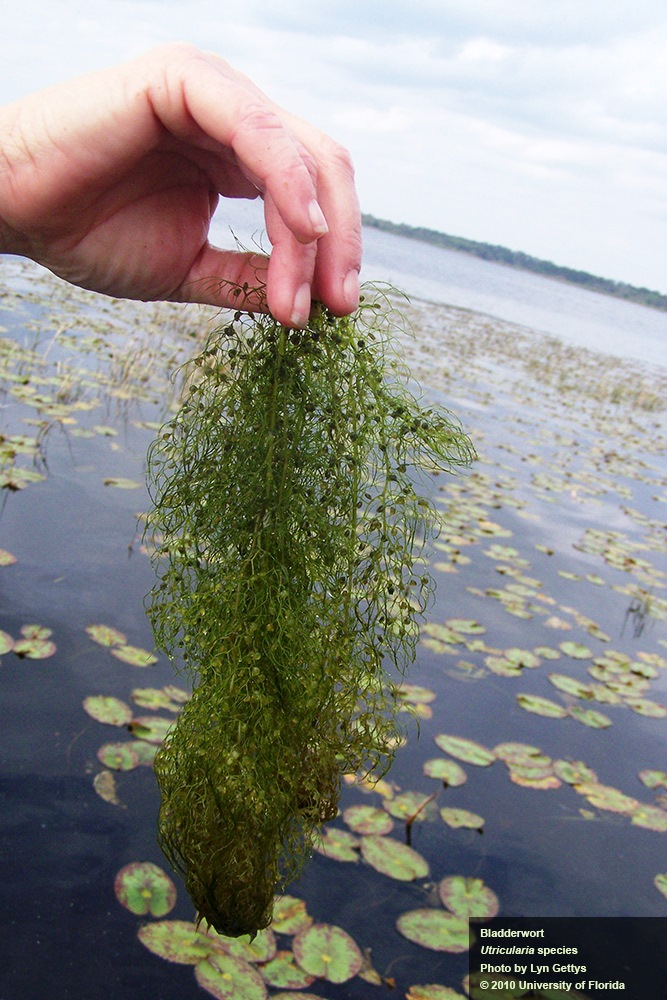 Utricularia’s many small bladders (only a few millimeters in size, and seen in this photo as small dark spots) actually trap and digest tiny aquatic invertebrates! Photo by Lyn Gettys

These bladderworts are in the genus Utricularia whose Latin meaning, “little bag,” is descriptive of the many small bladders (only a few millimeters in size) on the plant which actually trap and digest tiny aquatic invertebrates!  Bladderworts are found in lakes, ponds, wetlands, and quiet coves of rivers and streams.  They are commonly found in waters with low pH and low nutrients.  One interesting fact is that bladderworts do not have roots. They have main stems from which lacy, intricate leaves grow.  Like other plants, bladderworts produce food by photosynthesis; but the trapped invertebrates supplement the nutritional requirements of this plant.  The Botanical Society of America reports that currently 220 species of Utricularia are found in temperate and tropical habitats throughout the world representing the most diverse and widespread genus of carnivorous plants. 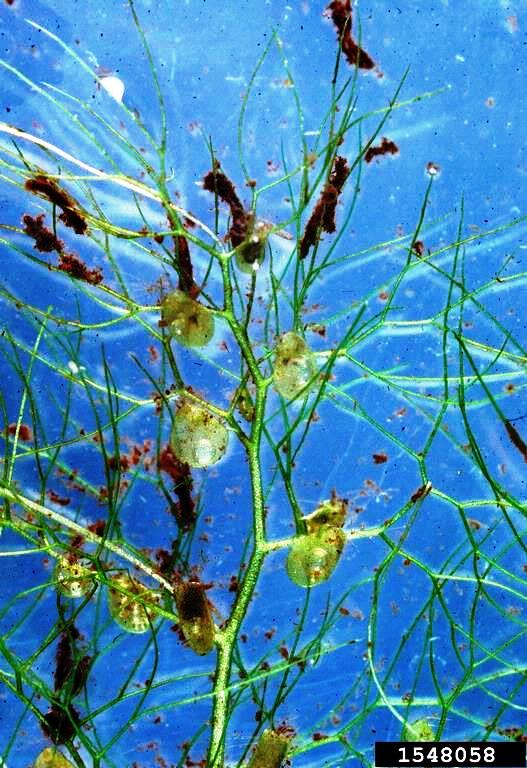 Similar to a Venus fly trap, hairs on the opening of the bladder act as triggers.  When tiny prey swim by and contact these hairs, it causes the bladder to spring open and inflate, drawing in water and prey like a vacuum.  Research has found that bacteria living in the traps act together in a mutualistic role to digest the food trapped in the bladders.  An article in the Journal of Experimental Botany entitled “The carnivorous bladderwort (Utricularia, Lentibulariaceae): a system inflates,” details another fascinating aspect of these plants: the bladders often look like the tiny prey (microcrustaceans/cladocerans) they are catching.

“Darwin (1875), noted yet another insight: aquatic Utricularia bladders bear a striking resemblance to microcrustaceans. The bladder shape, surface reticulations, stalk, and especially the antennae and bristles resemble microcrustacean anatomy. Interestingly, the bladders most closely resemble the littoral zone cladocerans (bosminids and chydorids) that are frequently found or overrepresented in bladders (Guiral and Rougier, 2007;  Alkhalaf et al., 2009)….Moreover, experiments reveal that the cladoceran-like structures of bladders significantly improve the capture rates of cladocerans (Meyers and Strickler, 1979; Harms, 1999;  Jobson and Morris, 2001).” 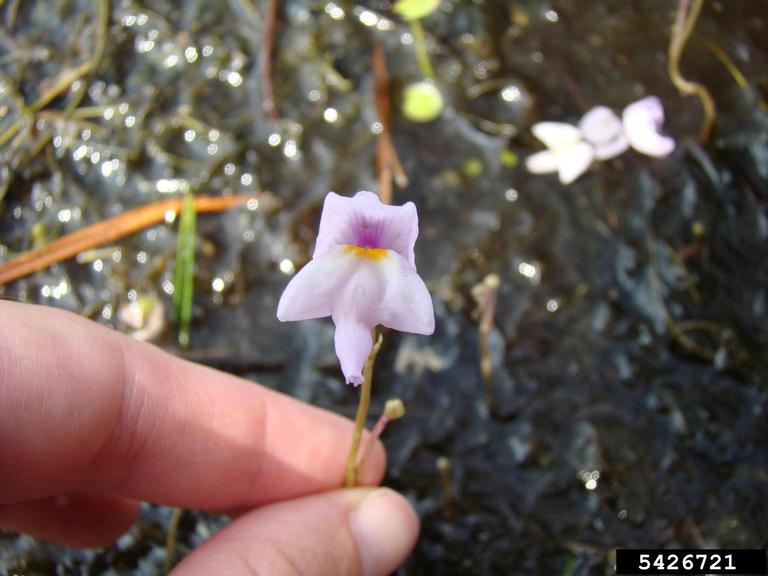 Bladderwort flowers are small but beautiful, and are designed to maximize pollination. This is purple bladderwort (Utricularia purpurea). Photo by Rebekah D. Wallace, University of Georgia, Bugwood.org

Bladderwort flowers are another beautiful feature of this plant.  In Florida most species have yellow flowers, some are lavender to purple.  The flowers bloom several inches above the water, and their shape is designed to efficiently attract and remove pollen from pollinating insects like bees.  Part of the flower is shaped like a spur which contains a nectar reward for pollinating insects.  This link, The Utricularia, to a Botanical Society of America publication details the botany and pollination ecology of bladderworts.

We hope this article piques your curiosity about some of Florida’s obscure native, aquatic, carnivorous plants!  Maybe you, too, will include them in your list of favorite La Florida plants!

Below are the publications used for this article: