Humans have been settling on, and around, coastal estuaries since they first arrived in the panhandle over 10,000 years ago. These bodies of water have provided food and recreation as long as anyone can remember.  They are a magnet for those looking to build homes or businesses – and we continue to be attracted to them today. 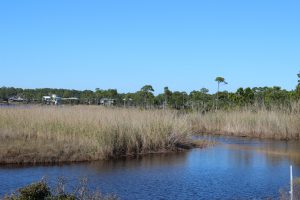 Black Needlerush is one of the species of marsh grasses that live in brackish conditions.

Estuaries are defined as semi-enclosed bodies of water where fresh and sea water mix.  The point where the freshwater enters is called the head of the bay; the point where seawater enters is called the mouth. Seawater is denser than freshwater so during incoming tides the saline water tends to “wedge” it’s way into the upper estuary along the bottom.  Under certain conditions, it is possible to catch freshwater fish near the surface and marine species on the bottom at the same location.  The mixture of fresh and seawater makes for an interesting cocktail of salinities termed brackish water – which is required for the development of almost 90% of the commercially valuable seafood species we enjoy.  This ecosystem supports stands of vegetation which are also important in the development of some species – some of these systems are the most biologically productive on the planet.

We are lucky to have several large estuaries along the Florida panhandle. All of our bays are what are called drowned river valleys.  Most are very wide and pretty shallow, with the highest average depth being 17 feet in Choctawhatchee Bay.  The rivers that feed these estuaries begin in states north of us and bring with them needed freshwater and nutrients.  Each of the panhandle estuaries is unique and provides different resources for their neighboring communities.  Below is a breakdown of some of these characteristics.  This information was provided by GulfBase.org.

You can see some of our estuaries have large areas and tremendous amounts of freshwater inflow. Others not so much, the bays with less freshwater inflow have higher salinities – and support a different ecology than the others.  Is one better than the other?… no… certainly our ancestors understood this.  Higher salinities meant more seagrass, scallops, and urchins – certain species of fish and maybe even marine turtles could be found here.  Lower salinities meant a different group of fish, oysters, and crabs.  It’s all good!  Residents should benefit from what the bay provides – and not try to make “your bay” more like “another bay”.

They have suffered some over the years – discharge containing organic and inorganic chemicals have tainted some drinking water supplies as well as reduce valuable aquatic resources. Increased sediments from development have darkened the waters reducing light and reducing submerged plants.  Heavily fishing and recreation have impacted both the habitats and the species that inhabit them.  Through the efforts of universities, government agencies, non-profit organizations, and private citizens many of the problems have been addressed – and recovery is occurring… but there is still more to do.

National Estuaries Week is a chance for all who live in the panhandle to realize how important these bodies of water are to our locally economy and to our quality of life. We hope you will appreciate them and do your part to help protect them. HAPPY NATIONAL ESTUARIES WEEK!