There have been several fungal invaders entering and spreading within the US in recent years and I’d like to draw attention to four of them: 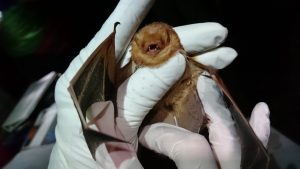 These diseases have devastating effects on multiple species. Bats, frogs, and salamanders are important insect predators, and all species –including trees- cycle nutrients through ecosystems to provide carbon storage benefits as well as other services.  Bat populations in North America are declining precipitously as WNS marches westward across the continent.  Many frog populations across the globe have disappeared because of Chytrids, with several species recorded as extinct and some are being listed under the Endangered Species Act.  In addition to nutrient cycling, Lauracea trees benefit humans as food crops, aromatic ornamental trees, and medicinal plants.  However, Laurel wilt disease is found in nearly every county in Florida, and continues to spread throughout the southeast.

The state and the US must remain vigilant and monitor against the introduction of B-sal, a recently discovered and highly transmissible disease spread through pet trade salamanders. It has not yet been observed in the US, but has caused widespread declines in native salamanders of the Netherlands and UK.

Unprecedented numbers of new and emerging pathogenic fungi continue to be discovered. Fungi genomes are amazingly adaptable, overcoming plant and animal defenses, and becoming resistant to fungicides.  Increasing human traffic, trade, and disturbance introduce these pathogens to new habitats.  Trade ports are key introduction sites.  Always practice decontamination procedures when handling wildlife and native plants, even in areas without confirmed infections to prevent the spread of disease to new populations.