A Pretty Problem: Invasives Which Bloom in Autumn 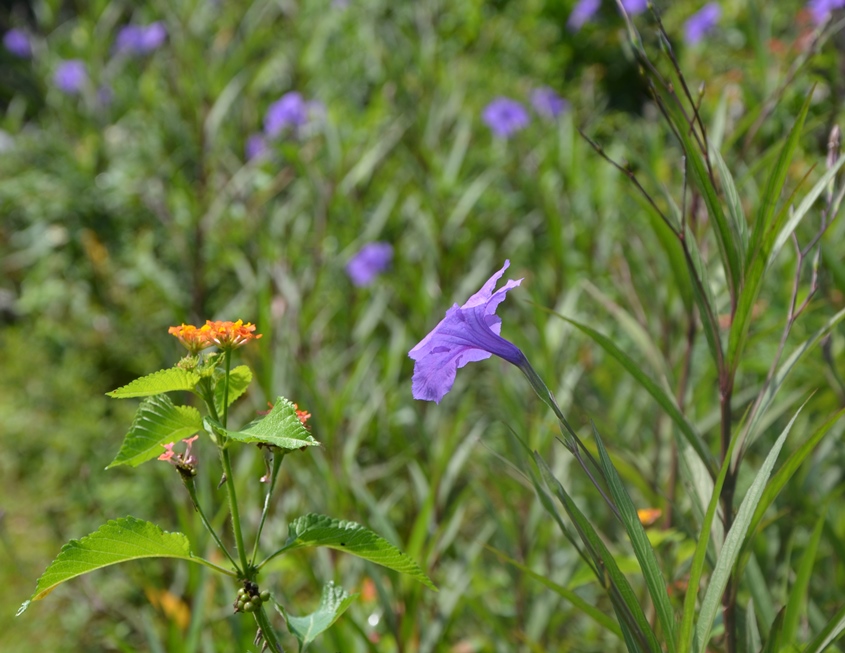 Lantana, on the left, and Mexican Petunia, on the right, are both exotic invasive plants which can displace many native species and disrupt the natural balance.

Autumn is usually considered the season of colors in the natural parts of north Florida, and other locations in North America. This tonal attribute is commonly credited to the foliage changes as the growing season ends.

Maples, sweet gums, hickory and many others make their contributions to the natural palette of shades and hues which have existed since long before human habitation in the area. Even some of the native plants add to the display.

Goldenrod and dogfennel add highlights to the brilliant display as winter, believe it or not, approaches. Unfortunately there are some attractive shades in the exhibition which are an indication of exotic invasive plants which have pushed out native.

Both lantana and Mexican petunias are currently blooming, but an indication of problem species. Both were introduces as ornamental plants, but quickly escaped into the wild where they could colonize unchecked.

Lantana (Lantana camara) is a woody shrub native to tropical zones of North and South America. It flowers profusely throughout much of the growing season.

Because of the plant’s ornamental nature, many different flower colors exist, but the most frequent color combinations are red and yellow along with purple and white. Lantana is now commonly found in naturalized populations throughout the southeastern United States from Florida to Texas.

It is currently ranked as one of the top ten most troublesome weeds in Florida and has documented occurrences in 58 of 67 counties. Curiously, despite the bad reputation it is still found in home and commercial landscapes.

As part of its arsenal of conquest, Lantana produces allelochemicals, or plant toxins, in its roots and stems. These allelochemicals have been shown to either slow the growth of other plants or totally remove them.

Some of these same chemicals give lantana an acrid taste and deter insects or other animals from consuming the leaves. Of importance to pet and livestock owners, these leaf toxins are damaging to animals.

If animals consume the leaves, they often begin to show symptoms of skin peeling or cracking. Once animals show these symptoms, there is little or no treatment that can reverse the process.

Although lantana’s leaves are poisonous, its berries are not. Birds readily consume the fruit and are responsible for much of the seed’s distribution over wide areas.

Mexican petunia (Ruellia simplex) is a native of Mexico, but also the Antilles and parts of South America. Its tolerance of varying landscape conditions makes it a common choice for difficult to plant areas and has contributed to it popularity and wide use.

Mexican petunia tolerates shade, sun, wet, dry, and poor soil conditions. It is a prolific bloomer with flowers in shades of purple and pink peaking in the summer, but with the potential to also bloom in spring and fall in some parts of Florida.

Environmental tolerance, abundant seed production, and an ability to easily grow from plant cuttings have all promoted the spread into natural areas bordering developments. The Mexican petunia has been credited with “altering native plant communities by displacing native species, changing community structures or ecological functions, or hybridizing with natives” according to the Florida Exotic Pest Plant Council in 2011.

Given the continued popularity of both species, plant breeders have developed sterile, non-reproducing cultivars which do not have the negative characteristics of these problem plants. It is recommended using only the sterile type so autumn’s colors continue to be natural.