2020 Year of the Turtle – the softshells

These are some of the most unique turtles in the Order Chelonia.  Softshells are very distinct with their flat, leathery shells and long tubular snouts.  These guys like to lie beneath the sand of Florida’s rivers, buried except their eyes and snout, awaiting passing fish to ambush.  They have very long necks to extend their reach during a strike and three sharp bony plates in the roof of their mouths to rip fish flesh.  Those handling these should be careful.  They have a LONG reach and a nasty bite. 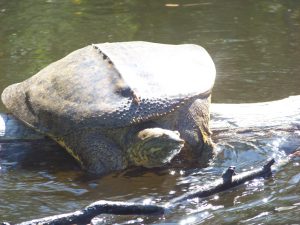 There are believed to be 22 species of softshells around the globe but only three live in Florida, and two of those are only found in the western panhandle, one is only found in Escambia County.

The Florida softshell (Apalone ferox) is found throughout the state.  Unlike the other Florida species, this one can be found in slow moving streams, ponds, lakes, retention ponds, and even some brackish systems.  It prefers to NOT inhabit faster moving rivers.  It is the largest of the Florida softshells reaching a carapace length of 30 inches (2.5’) and a mass of 100 pounds!  Like many turtles, females are large than males.  Besides size, the Florida softshell can be distinguished from the others by the low, round tubercles along the nape of the carapace.  This turtle is often seen basking in quiet waterways and will defend itself aggressively.  Like many freshwater turtles, Florida softshells nest during daylight hours in sandy soils.  They typically lay 15-25 eggs and more than one clutch a year.  Unlike other freshwater turtles, sex is not determined by egg temperature but rather by genetics.  Though they are fish eaters, much of their diet consist of snails and insects.  Crayfish, clams, snakes, turtles, and birds (though rare) have been found in their gut.  This species has few predators as adults but are heavily preyed upon by humans for the food markets outside of Florida.

The Gulf Coast Spiny Softshell (Apalone spinifera aspera) is smaller than the Florida softshell, but larger than the Gulf Coast Smooth, with maximum carapace length at 18 inches.  They can be distinguished from the other softshells by having spiny, or spike looking tubercles along the nape of the carapace.  The hatchlings are tan with numerous small spots and dark thin lines along the margin of the carapace.  In Florida, this softshell is only found in the panhandle and in the St. Marys River in Nassau County.  It prefers fast moving rivers but will move into quieter waters if the Florida softshell is not present.  Like many turtles, they nest during daylight hours in sandy soils during the spring.  Clutch size is 20-25 eggs and they lay more than one clutch per year.  Incubation is between 60-70 days.  They are bottom feeders feeding mostly on crayfish and fish.  There are few adult predators and no commercial fishery for this species.

The Gulf Coast Smooth Softshell (Apalone mutica calvata) has only been found in Escambia County within our state.  As the name implies, the nape of the carapace does not have the round or spike-like tubercles – rather, it is smooth.  It is a smaller softshell, with a carapace length of 12 inches.  The young have large circular spots which are harder to see in adults.  It has a milder disposition than most softshells, preferring to withdraw into the shell rather than bite.  It prefers rivers over other types of water bodies and has only been found in the Escambia River within our state, and only in the upper – faster moving portions of it.  They have been found in quiet waters connected to this river.  It seems to like sections of the river where sandbars are common, buried in sand near them awaiting fish.  They will quickly retreat to the deep part of the river when encountered.  The GCSS will use these sandbars for nesting in the spring, laying only about 6-8 eggs, and typically more than one clutch each season.  The eggs incubate for 60-70 days and sex is determined by genetics, not temperature.  Though fish eaters, insects are much of their diet.  There is no commercial fishery for this small turtle.

Like all turtles, nest predation is high for softshells, but river flooding also takes a lot of nests.

All freshwater turtles afford some protection (more some than others).  Residents can collect no more than one softshell/day for noncommercial use, no more than two in your possession, and no eggs.

These are really neat looking turtles and it is very exciting to see them while paddling our rivers.  We hope you get to see one soon.