These are some of the more familiar Florida turtles we have.  Working with youth, I often hear them called “snapping turtles” because (a) these are the most common turtles they encounter, and (b) snapping turtles are the only name they know 😊

I myself had a “pet” box turtle when I was young named… “snappy”.  Yep… 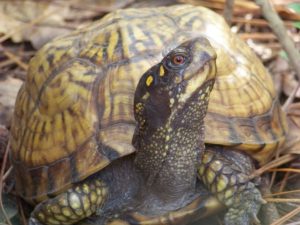 This Gulf Coast box turtle has a lot of yellow on the shell. Their shell coloration varies.
Photo: Molly O’Connor

That said, they do seem to be very common everywhere.  Neighborhoods, parks, gardens, farms, you name it, people find these things.  However, research suggests that the “commonness” of these guys maybe just in encounters with the same individuals, we really do not know how common they are.

They are a great way to introduce youth to the world of turtles.  When picked up they quickly withdraw and close their shells – the only turtles we have that can completely do this (watch out though, they do have a habit of urinating when held).

There is debate as to how many kinds of box turtles we have.  Most agree that the four that have been listed are all subspecies of Terrapene carolina.  This turtle is typically called the “Eastern” box turtle.  This species does exist and is quite common along the Atlantic seaboard.  If differs from other subspecies in that the back end of the carapace ends abruptly – there is no “flare” to the margins of the carapace. 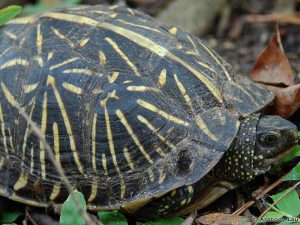 The lined pattern of this carapace identifies it as the Florida box turtle.
Photo: Florida Museum of Natural History

The Florida box turtle has a dark carapace with straight lined yellow streaks (like a sunbeam burst) pattern across its shell.  The back end of the shell ends abruptly as it does in the Eastern.  The Gulf Coast box turtle is the big boy of the group.  Most of these box turtles have carapace lengths no more than 7 inches long.  The Gulf Coast can be as long as 8 inches and the back-end margin of the carapace is flared.  The pattern of color on the Gulf Coast varies.  It can be red, yellow, brown and the lighter colored markings can be varied as well.

Box turtles are emydid turtles – which are usually associated with freshwater – but box turtles are much more terrestrial than their cousins.  Some even referred to them as tortoises, but they are not.  They like a variety of habitats being found in dry scrub pine forests, damp wet palm hammocks, and occasionally in marshes.  Their hind feet are slightly webbed, but they are not great swimmers and are rarely found in deep water.  That said, they do love rain.  When it rains, they are on the move looking for food and places to lay eggs. 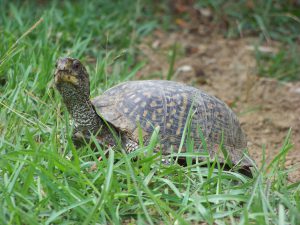 The abrupt downward end of the carapace and blotched pattern of the shell identifies this as an Eastern box turtle.
Photo: Molly O’Connor

Research suggests that each turtle will inhabit about 5 acres and that a single acre can support up to 16 animals.  They are omnivorous and eat a variety of invertebrates and plants – they particular like worms and snails.  They have also been known to feed on dead animals lying about, – and this should make some folks happy… they like to eat cockroaches!

Males look different than females in that their plastron has a concaved depression in it and their tails are much longer.  Females will usually lay about 2 eggs in a nest she digs during rainy afternoons.  She will lay more than one nest each season usually producing about 9 eggs each year.  Baby box turtles are usually dark brown with a yellow stripe running down the middle of their carapace.

Many turtles, eggs, and hatchlings are lost to predators.  Fire ants are a big problem as are birds, mammals and reptiles.  Scarlet snakes are particularly good at finding nests.  Most adults’ bare scars from attacks but usually survive by withdrawing into their shells.  One animal, the wild pig, is believed to be strong enough to crush the entire shell consuming the turtle.  Raccoons are also good at grabbing a limb before they can withdraw – there are many 3-legged box turtles running around, but they seem fine and still hunt well. 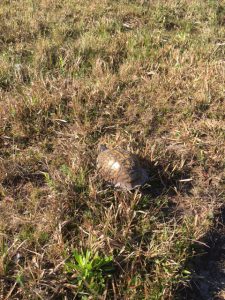 One problem they do have is fire.  They prefer wooded areas, even the flowerbeds around your house.  They do not dig burrows like the gopher tortoise but rather make “forms” in the pine straw or leaves – where they spend the cold and hot days of the year – they also do not like low humidity days and will build forms during these times as well – but these do not protect them from fires, whether wildfires or prescribed ones.

Despite all of this – they are one of the longer-lived turtles in our state.  Though most do not reach the age of 40 years these days, they have the ability to reach 100!

No doubt this is one of the coolest turtles we have – and we really enjoy encountering them.  Take a walk around after a rainy day and see if you can find one in your yard!