2020 Year of the Turtle – chicken turtles

Bet you have never heard of these?

And the reason you probably have not heard of them is because, unlike so many other turtles, they do not spend a lot of time in the water. 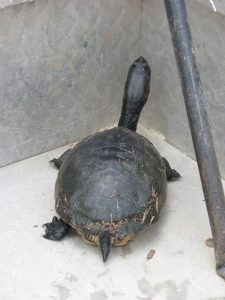 The long neck and oval shell of the Florida Chicken Turtle.
This one is missing a rear leg, probably attacked by a raccoon.
Photo: Molly O’Connor

Chicken turtles are fans of the ephemeral ponds, these are ponds that have water in them after heavy rain but are dry otherwise.  These turtles inhabit such locations and hide in the brush and leaf litter during the dry periods.  They are predators within this system, feeding on insects and crayfish mostly.

It is one of the many emydid turtles and their shells are more oval in shape than round.  It is a dark black to olive color and has a distinct pattern of yellow stripes looking like a fish net on the shell.  Most shells are in the 10-inch range in length and, like many species of turtles, the males are smaller.  The plastron (belly shell) is a beautiful solid creamy yellow color with no dark marking at all.

Most of the ponds where these turtles have been found are less than 20 inches deep.  It seems to avoid river flood plains, preferring small ponds in savannas, sandhill depressions, and wetlands.  They seem to be out more in the early mornings and shortly after sunset.

Unlike most emydid turtles, chicken turtles BEGIN their nesting season in August and continue into the winter.  The females wander over open ground seeking good nesting sites.  They prefer open grassy areas and dig the nest during daylight hours.  The average number of eggs deposited is around 10 and, like other turtles, more than one clutch will be laid each season.

They do not seem to be very abundant in the ponds they inhabit; 3-5 turtles/hectare seems to about the norm.  When encountered in the water, they seem to be solitary.  As mentioned, their favorite foods are arthropods – primarily insects and crayfish.

It appears one of the largest threats in our state is roadkill.  Seasonal changes in rainfall force the turtles to move and, being more active in winter when we have more visitors, road kills are common.  Raccoons also take quite of few from their habitat of not living in deep water.  And there is ALWAYS the issue of habitat loss – the number one cause of biodiversity declines everywhere.  Florida continues to grow, and these turtles will continue to be threatened.

I have only found one of these in the years I have been “turtling”.  It was pretty exciting, and it was a day or so before we figured out what kind it was – you don’t see chicken turtles very often, so it was a surprise.  It was missing one leg, we are guessing raccoon attack, and we kept it for the afternoon before letting it go.  I have not seen one since.

That said, they are around – and I hope you find one someday.  It is one of those rare finds.

Hopefully, you will be able to get out and discover many of Florida’s turtles during this YEAR OF THE TURTLE.