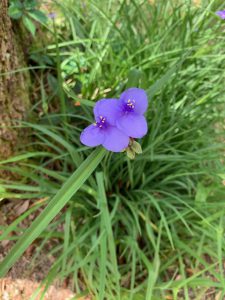 The brilliant purple, edible spiderwort flowers are only around for a day! Photo credit: Mary Anne Tomlinson

The spiderwort is a pretty little plant that most people have encountered in their yards or on roadsides. In cattle or hay pastures, it is considered a weed because cows won’t eat it, and its high moisture content can ruin hay harvests. In a home landscape, though, it can be a nice addition to the yard. I know many homeowners who refuse to let them be mowed down with the lawn simply because of their brilliant color. The native spiderwort (genus Tradescantia) is a perennial flower that grows in clusters, often in moist soils. It is a member of the dayflower family, which means each flower is only open for a single day.  The plant, a favorite of bumblebees, can be identified quickly by its triad of violet petals and bright green, strap-like leaves. 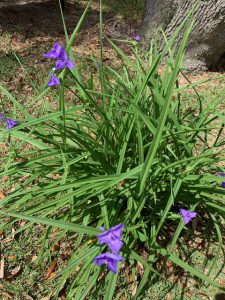 Known by common names as varied as “Bluejacket,” “Snotweed,” and “Cow Slobber” (due to the mucilaginous—mucus-like–consistency of its sap), the plant is widespread throughout the eastern and central United States. An interesting aspect of this sap is that it can be used as a salve for insect bites, similarly to aloe. Even more useful for those interested in native edible plants is that the flowers, stems, and leaves can be eaten raw in a salad or cooked and used as a culinary herb. The flowers can be candied with sugar as a dessert or used atop cakes.