Embrace the Gulf 2020 – the nematodes

As we continue our series on marine life in the Gulf of Mexico, we also continue our articles on marine worms.  Worms are not the most charismatic creatures in the Gulf, but they are very common and play a large role on how life functions in this environment.  Roundworms are VERY common.  There are at least three phyla of them but here we will focus on one – the nematodes. 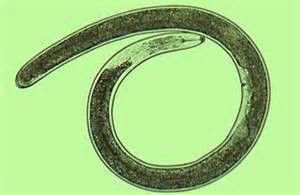 Most nematodes are microscopic, a large one would be about 2 inches, and some beach samples have found as many as 2 million worms in 10 ft2 of sand.  So, what do we know about them?  What role, or function, do they play in the ecology of the Gulf of Mexico?

There are free living and parasitic forms in this group.  There are at least 10,000 species of them, and they can be found not only in the marine environment, but also in freshwater and in the soil found on land.  They have played a role in the success of agriculture, infesting both crops and livestock.  Nematodes can be a big concern for farmers and gardeners.

The free-living forms are known to be carnivorous, feeding on smaller microscopic creatures.  They have toothed lips, and some have a sharp stylet to grab or stab their prey.  Some stylets are hollow and can “suck” their prey in.  Moving through the environment, they can consume algae, fungi, and diatoms.  Some are deposit feeders and others are decomposers.  On our farms and in our gardens, they are known to enter plants via the roots and can be found in the fruit.

The life cycle of the human hookworm.
Image: CDC

The parasitic version of nematodes has been a problem for some species.  In humans we have the hookworms and pinworms.  Dogs have their heart worms.  An interesting twist on the parasitic nematode way of life, compared to flatworms like tapeworms, is their lack of a secondary (or intermediate host).  The entire life cycle can take place in the same animal.

Females are larger than males and fertilizations is internal.  Males are usually “hooked” at the tail end and hold on to the females during mating.  About 50 eggs will be produced and released into the digestive tract, where they exit the animal in the feces and find new hosts either by the feces being consumed or drifting in the water column.

There multiple forms of parasitism in nematodes.

It would be fair to say that many forms of marine creatures have nematodes living either within them, or on them.  Some can be problematic and cause disease; some diseases can be quite serious.  Others play an important role in “cleaning” the ocean, filtering the sand of organic debris.  Many have heard of nematodes but know little about them.  Either good or bad, they do play roles in the ecology of the Gulf of Mexico.