Seagrasses have been described as the “nursery of the sea”.  Studies show that up to 90% of the commercially valuable fin and shellfish species spend part, or all, of their lives in these submerged meadows.  As you can imagine, these grasses must grow in clear, relatively shallow waters – so they are more inshore.  You might also imagine that most of the fish living here are going to be small.  There are the larger predators in this grassy world, but most are going to be small enough to hide amongst the blades.

These inshore seagrass meadows not only provide hiding places but provide food as well.  Interestingly, most do not feed on the grass directly, but rather the tiny plants and animals that are attached to the blades – what are called epiphytes and epizoids.  Those that feed on these are then preyed upon by slightly large creatures until we find the larger apex predators – like the speckled trout.

Many of those who reside here are specialist in camouflage and mimicry, and others might be ones who actually live in the sand bordering the edge of the meadows – waiting for a chance to pounce on unsuspecting food.  Let’s meet a few of these interesting fish. 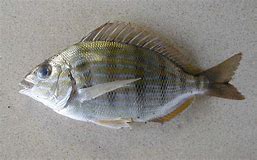 You are at the beach for a day of fun and sun.  You enter the water of Santa Rosa Sound to play at the edge of the seagrass bed, or maybe to snorkel and explore it.  As you stand on the sand you feel little nips at your ankles and immediately think – CRAB! But you would be wrong.  As you look closer you will see it came from a small fish – and the more you stir the sand, more of these small fish arrive.  They are probably feeding on the small invertebrates that are stirred up from your movement, but they periodically nip at you as well.

This small fish is a very common member of the inshore fish community known as the pinfish.  They are members of the Porgy family, related to sheepshead, and have incisor teeth for crushing the shells of their prey.  Most locals are first introduced to them as a kid while fishing.  They seem to bite, or steal, any bait you put on.  Most often used as bait themselves, they are actually edible – but you need one of the large ones to have a meal.  They get their common name from the sharp spines of their dorsal fin.  When snorkeling in the grassbeds you will find they are the most common fish there. 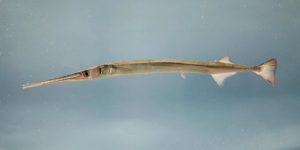 These guys look scarier than they are.  Long skinny fish with long skinny snouts that hold long skinny teeth.  They resemble barracuda and have the look as if they could attack and do some damage – but they are harmless, unless you catch one in a net, then they will swing their long skinny heads towards your hand for snip.

These small predators travel above the grassbeds looking for potential prey hiding among.  Small juvenile fish seem to be what they want.  Though often just referred to as “needlefish”, there are actually four species, but they are hard to tell apart. 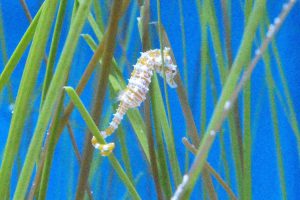 These are captivating fish, and very hard to find as they blend in so well, but they are there – along with their close cousins the pipefish.  It seems hard to call it a fish at all – it certainly does not look like one.  Swimming vertically in the water, no tail to speak of, they seem like a creature in their own group.  But they are fish.  The scales are fused into an armor plating and they do have both gills and fins – characteristics of fish.  They will use their prehensile tail to grab onto a grass blade, hanging there waiting for tiny shrimp to swim by which they inhale using a vacuum like motion with their tube-shaped mouths.

Pipefish resemble seahorses but are elongated, with a distinct fin for a tail, and swim horizontally as most fish do.  They will turn vertically in the grass to appear to be a blade themselves and hunt similar prey as their seahorse cousins.

A well-known characteristic of this group is the fact that the males carry the fertilized eggs – not the females.  Males can be identified by the brood sac on their ventral side and they may carry up to 80 eggs.  The eggs hatch within the pouch and the young are born alive. 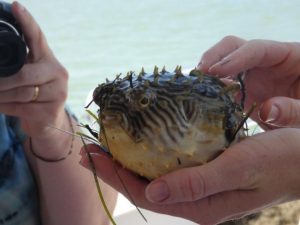 This group of fish are famous for their ability to “blow up”, or inflate like a balloon, when threatened.  Kids love to play with them and get a kick out of watching them inflate.  These are round bodied – slow moving fish, which is one reason they inflate.  It does not matter if you can catch them, you cannot swallow them if you do!

There are actually two different families of “blowfish”.  The true puffers are smaller (3-12 inches), have tubercles on their bodies instead of long spines, and the teeth in the upper and lower jaw have a space forming four teeth (two on the top jaw, two on the bottom) – giving them their family name “tetradontidae”.  The “burrfish” are larger in size (1-2 feet), have long spines on the body, and no median in the teeth – so only one tooth on the top jaw, one on the bottom – “diodontidae”.

The most common one found is the striped burrfish.  The big boy of the group – the 2-foot porcupine fish – is rare in the northern Gulf and prefers the reefs of the open sea to grassbeds.

When threatened they will inflate with water (or air) and try to continue swimming.  After the danger has passed, they will deflate and go about their merry way.  There are stories about their flesh being poisonous and dangerous to eat – it is true.  The compound they produce is one of the more toxic found in the fish world.  Though there are certified chefs around the world who can safely clean them, it is not recommended you eat these.