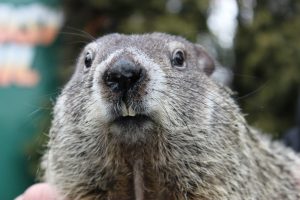 Groundhog Day is celebrated every year on February 2, and in 2021, it falls on Tuesday. It’s a day when townsfolk in Punxsutawney, Pennsylvania, gather in Gobbler’s Knob to watch as an unsuspecting furry marmot is plucked from his burrow to predict the weather for the rest of the winter. If Phil does see his shadow (meaning the Sun is shining), winter will not end early, and we’ll have another 6 weeks left of it.  If Phil doesn’t see his shadow (cloudy) we’ll have an early spring.  Since Punxsutawney Phil first began prognosticating the weather back in 1887, he has predicted an early end to winter

only 18 times.  However, his accuracy rate is only 39%.  In the south, we call also defer to General Beauregard Lee in Atlanta, Georgia or Pardon Me Pete in Tampa, Florida.

But, what is a groundhog? Are gophers and groundhogs the same animal?  Despite their similar appearances and burrowing habits, groundhogs and gophers don’t have a whole lot in common—they don’t even belong to the same family. For example, gophers belong to the family Geomyidae, a group that includes pocket gophers, kangaroo rats, and pocket mice. Groundhogs, meanwhile, are members of the Sciuridae (meaning shadow-tail) family and belong to the genus Marmota. Marmots are diurnal ground squirrels. There are 15 species of marmot, and groundhogs are one of them.

Science aside, there are plenty of other visible differences between the two animals. Gophers, for example, have hairless tails, protruding yellow or brownish teeth, and fur-lined cheek pockets for storing food—all traits that make them different from groundhogs. The feet of gophers are often pink, while groundhogs have brown or black feet. And while the tiny gopher tends to weigh around two or so pounds, groundhogs can grow to around 13 pounds.

While both types of rodent eat mostly vegetation, gophers prefer roots and tubers while groundhogs like vegetation and fruits. This means that the former animals rarely emerge from their burrows, while the latter are more commonly seen out and about. In the spring, gophers make what is called eskers, or winding mounds of soil. The southeastern pocket gopher, Geomys pinetis, is also known as the sandy-mounder in Florida. 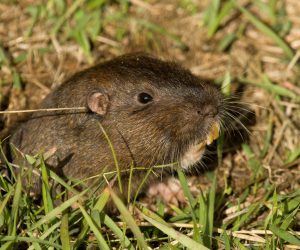 Gophers dig extensive tunnel systems and are rarely seen on the surface. The average tunnel length is 145 feet (44 m) and at least one tunnel was followed for 525 feet (159 m). The soil gophers remove while digging their tunnels is pushed to the surface to form the characteristic rows of sand mounds. Mound building seems to be more intense during the cooler months, especially spring and fall, and slower in the summer. In the spring, pocket gophers push up 1-3 mounds per day. Based on mound construction, gophers seem to be more active at night and around dusk and dawn, but they may be active at any time of day. 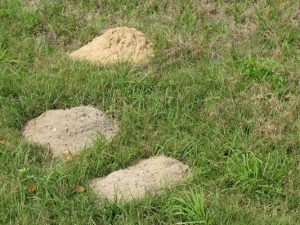 Many amphibians and reptiles use pocket gopher mounds as homes, including Florida’s unique mole skinks. The pocket gopher tunnels themselves serve as habitat for many unique invertebrates found nowhere else.

So, groundhogs for guesses on the arrival of spring.  But, when the pocket gophers are making lots of mounds, spring is truly here.  Happy Groundhog’s Day.