Cobia: An Amazing Fish and Fishery for North Florida 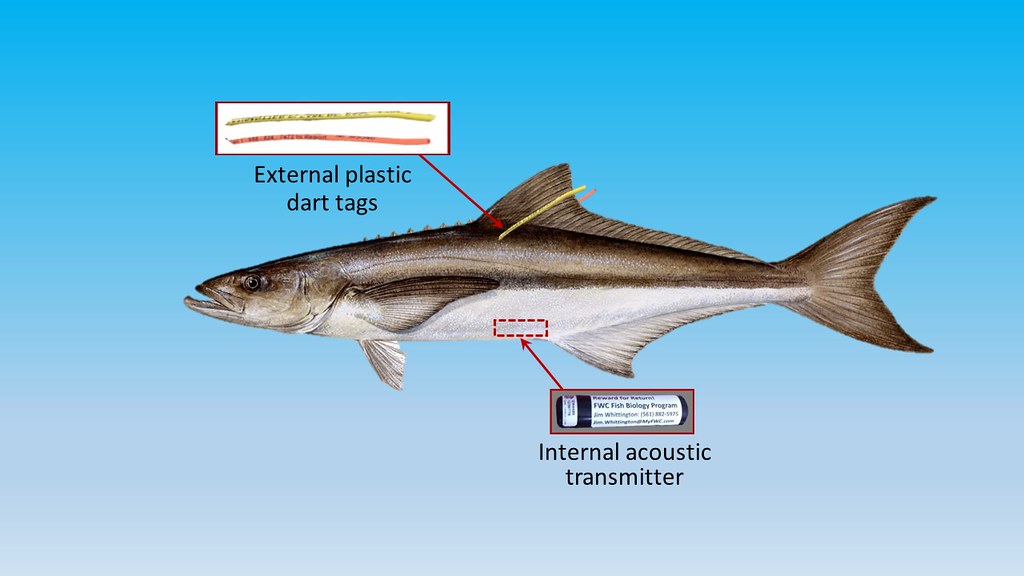 I must admit to having very limited personal experience with Cobia, having caught one sub-legal fish to-date. However, that does not diminish my fascination with the fish, particularly since I ran across a 2019 report from the Gulf States Marine Fisheries Commission titled “Management Profile for Gulf of Mexico Cobia.” This 182-page report is definitely not a quick read and I have thus far only scratched the surface by digging into a few chapters that caught my interest. Nevertheless, it is so full of detailed life history, biology and everything else “Cobia” that it is definitely worth a look. This posting will highlight some of the fascinating aspects of Cobia and why the species is so highly prized by so many people.

Cobia (Rachycentron canadum) are the sole species in the fish family Rachycentridae. They occur worldwide in most tropical and subtropical oceans but in Florida waters, we actually have two different groups. The Atlantic stock ranges along the Eastern U.S. from Florida to New York and the Gulf stock ranges From Florida to Texas. The Florida Keys appear to be a mixing zone of sorts where Cobia from both stocks go in the winter. As waters warm in the spring, these fish head northward up the Atlantic and Gulf coasts of Florida. The Northern Gulf coast is especially important as a spawning ground for the Gulf stock. There may even be some sub-populations within the Gulf stock, as tagged fish from the Texas coast were rarely caught going eastward. There also appears to be a group that overwinters in the offshore waters of the Northern Gulf, not making the annual trip to the Keys. My brief summary here regarding seasonal movement is most assuredly an over-simplification and scientists agree more recapture data is needed to understand various Cobia stock movements and boundaries.

Worldwide, the practice of Cobia aquaculture has exploded since the early 2000’s, with China taking the lead on production. Most operations complete their grow-out to market size in ponds or pens in nearshore waters. Due to their incredible growth rate, Cobia are an exceptional candidate for aquaculture. In the wild, fish can reach weights of 17 pounds and lengths of 23 inches in their first year. Aquaculture-raised fish tend to be shorter but heavier, comparatively. The U.S. is currently exploring rules for offshore aquaculture practices and cobia is a prime candidate for establishing this industry domestically.

Spawning takes place in the Northern Gulf from April through September. Male Cobia will reach sexual maturity at an amazing 1-2 years and females within 2-3 years. At maturity, they are able to spawn every 4-6 days throughout the spawning season. This prolific nature supports an average annual commercial harvest in the Gulf and East Florida of around 160,000 pounds. This is dwarfed by the recreational fishery, with 500,000 to 1,000,000 pounds harvested annually from the same region.

One of the Cobia’s unique features is that they are strongly attracted to structure, even if it is mobile. They are known to shadow large rays, sharks, whales, tarpon, and even sea turtles. This habit also makes them vulnerable to being caught around human-made FADs (Fish Aggregating Devices). Most large Cobia tournaments have banned the use of FADs during their events to recapture a more sporting aspect of Cobia fishing.

To wrap this up I’ll briefly recount an exciting, non-fish-catching, Cobia experience. My son and I were in about 35 feet of water off the Wakulla County coastline fishing near an old wreck. Nothing much was happening when I noticed a short fin breaking the water briefly, about 20 yards behind a bobber we had cast out with a dead pinfish under it. I had not seen this before and was unaware of what was about to happen. When the fish ate that bait and came tight on the line the rod luckily hung up on something in the bottom of the boat. As the reel’s drag system screamed, a Cobia that I gauged to be 4-5 feet long jumped clear out of the water about 40 yards from us. Needless to say, by the time we gained control of the rod it was too late; a heartbreaking missed opportunity. Every time we have been fishing since then, I just can’t stop looking for that short, pointed fin slicing towards one of our baits.