Rays of the Florida Panhandle

In our continuing series on the biogeographic distribution of island vertebrates, this week we look at a creature that, for some, is as scary as sharks – the rays.  The term stingray conjures up stinging barbs and painful encounters, and these have happened, but rays are easily scared away by our activity.  Occasionally people will step on one and the venomous spine is used to make you move your foot.  You can avoid this by shuffling your feet when moving across the sand.  Rays detect the pressure and move before you reach them.  Again, negative encounters with rays are not common. 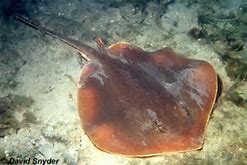 The Atlantic Stingray is one of the common members of the ray group who does possess a venomous spine.
Photo: Florida Museum of Natural History

There are 18 species of rays (from 9 families) found in our area.  An interesting note, only eight of those possess a barb for stinging, and five are from the family Dasyatidae (the stingrays).  Others that have barbs include the butterfly ray, cownose ray, and the eagle ray.

Rays are related to sharks but differ in that (a) the pectoral fin begins before the gills slits, and (b) the gill slits are on the underneath of the body – not on the side as found in sharks.  Shark distribution seems to be controlled by water temperature.  We see this with ray distribution as well, but interestingly the skates seem to be restricted to the Gulf of Mexico. Some are found almost exclusively in the east or west side of the Gulf.

Skates resemble stingrays but lack the venomous barb.  They will usually have small thorns on their bodies and lay their developing embryos in a leathery egg case folks call “mermaid’s purse” when they wash ashore.  There are four species found in the Gulf, but the spreadfin skate is ONLY found in the Gulf of Mexico and is not found along the Florida peninsula.  The clearnose skate, which can be found all along Florida and the eastern seaboard of the U.S., is absent from western Gulf.  It is interesting to try and understand why.  What barrier keeps these two skates from colonizing the entire Gulf?

There is a large plume of muddy freshwater that expands from the Mississippi River into the Gulf off Louisiana.  This plume could be a barrier for coastal species trying to expand their range.  However, the spreadfin skate is reported to be an outer continental shelf species and may not be influenced by this lower salinity water.  So, what is their story?

And why are these not found in the Caribbean?  In the Caribbean you do enter tropical waters where coral reefs become more common.  There is certainly a species shift when you reach this zone and it could be the food needed by these skates is not found here – a biological barrier.  Many find these biogeographic situations interesting.

There are 12 species that have the typical “Carolina marine fish” distribution, which means they are found throughout the Gulf up the eastern seaboard to Massachusetts and south to Brazil.   Two, the Atlantic torpedo ray and the roughtail stingray, expand their range farther into Canada.  As a matter of fact, the roughtail stingray prefers colder waters.

Torpedo rays are an interesting group.  This family of fish includes two species here in the Gulf, the Atlantic torpedo ray and the lesser electric ray.  Yep… these two have special muscle cells that can deliver an electric shock.  It is believed this electric current can detect and stun prey as well as repel predators.  The voltage is not dangerous but will get your attention.

Three of those “Carolina marine species,” the guitarfish, the lesser electric ray, and the yellow stingray, do not reach Massachusetts.  Their distribution ends at North Carolina.  You would have to guess water temperature as a barrier here.  The warm Gulf stream begins heading east across the Atlantic Ocean off Cape Hatteras towards Europe.  They could follow this current to Bermuda, but they have not been reported there.  This could be due to depth (pressure), being benthic fish, or food barriers.

There is one family that is tropical, the sawfish.  These bizarre dinosaur looking creatures were once common in the estuaries of the Gulf region.  They are now rare and protected.

One species of stingray, the Atlantic stingray has been found in the lower reaches of Louisiana rivers.  Like bull sharks, salinity may not be a barrier for them.

The distribution of our rays is not as universal as sharks.  The skates in particular have an interesting distribution pattern.  Pensacola lies right at the boundary of the eastern and western Gulf of Mexico, so we find both geographic groups here.  Though they may scare many people, rays are fascinating creatures and cool to see.