Eels of the Florida Panhandle

Eels… when that name comes up most think of either the vicious moray eels or the famous electric eel.  Moray eels do exist in the Florida panhandle, and we will talk about them.  Electric eels do not, they are found in the Amazon River system.  That said, we do have eels here – quite a few.  There are at least 18 species found in six different families.  Most are 2-3 feet in length, though the Banded Shrimp Eel (Ophichthus) can reach six feet.  About half of them are found offshore on the middle and outer shelves, the other half can be found in the inner shelf and estuaries, a few species swim into freshwater.  Shrimpers often catch them when trawling and occasionally anglers will catch them with rod and reel.

Eels superficially resemble snakes and sometimes are confused with them.  I have been told more than once that we do have sea snakes here.  We do not.  What people are finding are one of the 18 species of eels in the area.  We do have snakes swimming across our estuaries, but we do not have sea snakes.

Eels differ from snakes primarily in that they, being fish, possess gills – not lungs.  Most eels do have sharp teeth, the morays are famous for theirs, but no eels are venomous – so no worries there.  Most of our eels have very small scales or are completely scaleless and are often very slimy and difficult to handle.  They have been used as bait and one species, the American eel (Anguilla rostrata), has been used for food. 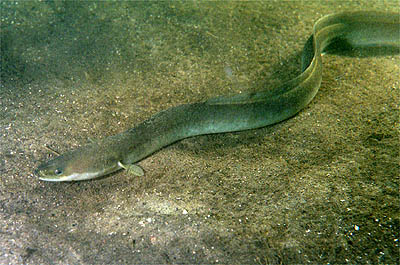 The Anguilla eel, also known as the “American” and “European” eel.
Photo: Wikipedia.

The American eel has an interesting life history.  They spawn in the Sargasso Sea, an area in the middle of the Atlantic Ocean.  Their developing leptocephalus larva are thin, flat, and transparent in the water.  They drift with the ocean currents into the Gulf of Mexico and eventually into our estuaries.  I have found them along the shores of Project Greenshores (in Pensacola Bay) during certain parts of the year.  From here they work their ways into our local rivers where people encounter the large adults.  I have found them living in submerged caves near Marianna and many locals have found them at the bottom of our rivers.  When time to breed, the adults will leave and head back to the open Atlantic to begin the cycle again.  An amazing trip. 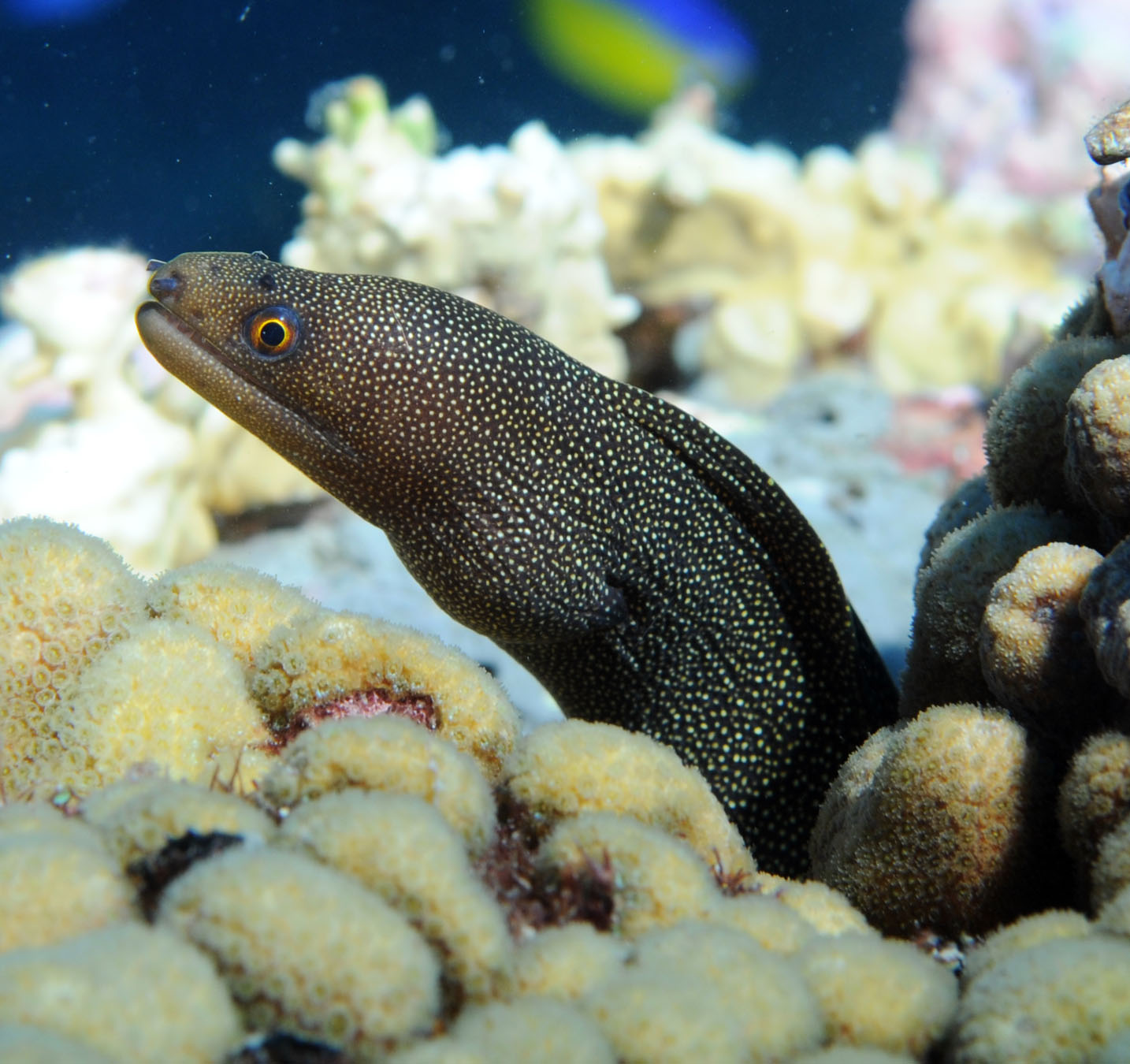 Moray eels are famous for the nasty attitudes and vicious bites.  They are more tropical and associated with offshore reefs, though the ocellated moray (Gymnothorax ocellatus) is often caught in shrimp trawls.  They live in the crevices of the reef ambushing prey.  Some, like the green moray, can get quite large – over six feet.  Like all eels, they have very powerful muscles and sharp teeth. 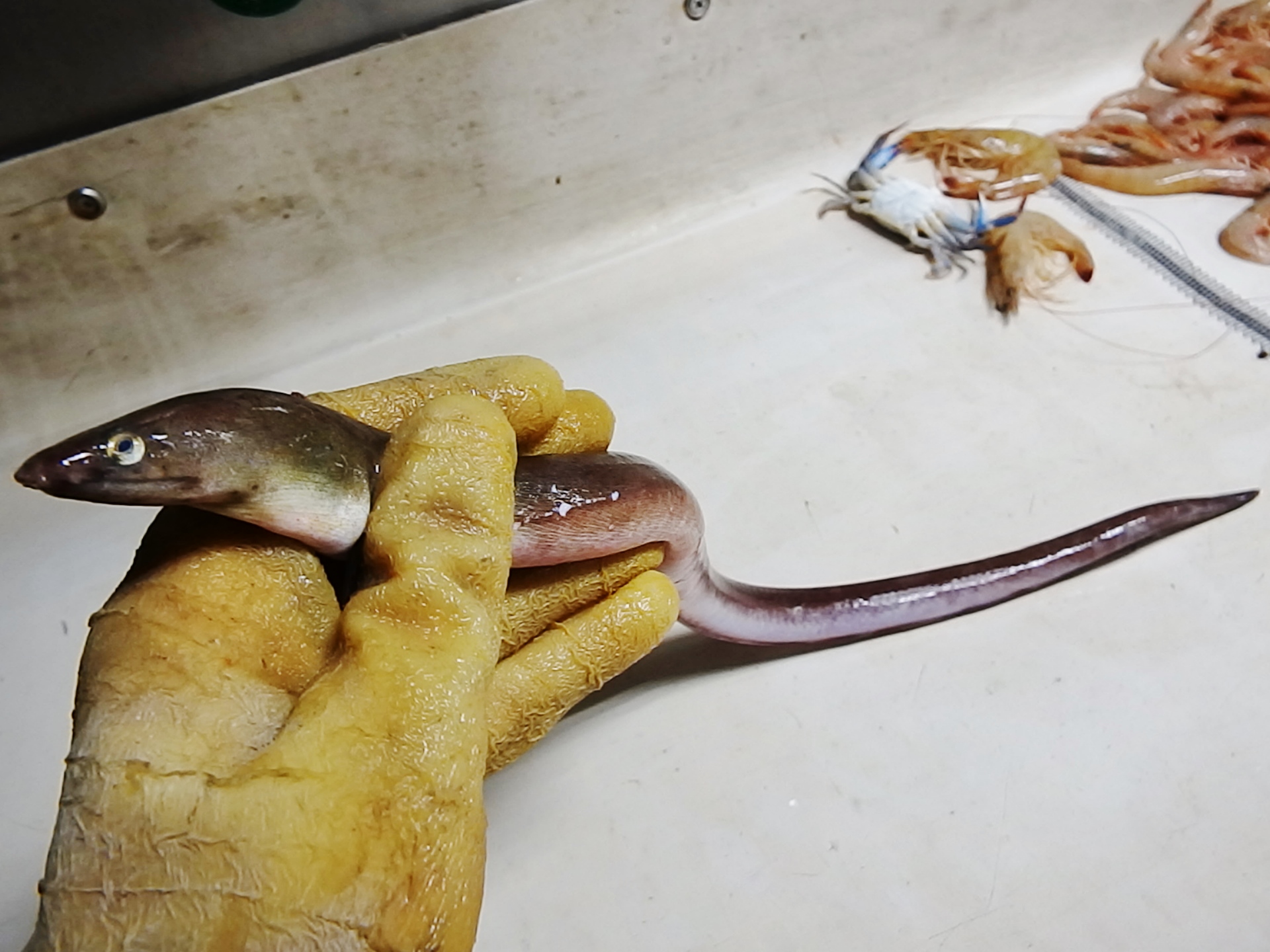 The shrimp eel is common on our inner and middle continental shelf.
Photo: NOAA

Conger eels are very common despite few people ever seeing them.  There are six species and they frequent the middle continental shelf, so are rare in estuaries.

There are eight species of snake, or worm, eels.  These are more common on the inner shelf and the coastal estuaries.  Many prefer muddy bottoms where they bury tail first to ambush prey swimming by.

The majority of these marine eels have a large geographic distribution.  Their larva can be carried great distances in the currents and their need for sandy or muddy bottoms can be met just about anywhere.  They appear to have few barriers keeping them from colonizing much of the Gulf and surrounding waters.  Most fall into the category we call “Carolina Fish”.  Meaning their distribution occurs from the Carolinas, throughout the Gulf of Mexico, south to Brazil.  There are a few species that can tolerate the lower salinities of the estuaries and one, the Anguilla eel, that can even venture into freshwater.

There are few species restricted to the tropical reefs, such as the morays.  But morays are found on our smaller middle shelf and artificial reefs in the northern Gulf.  Though found in parts of the Atlantic Ocean, Hoese and Moore1 reported one species of conger eel, Uroconger syringus, as only occurring near south Texas in the Gulf of Mexico.  What barriers keep it from colonizing other Gulf habitats is unknown.

Eels are true fish that we rarely encounter.  Encounters are usually startling but exciting at the same time.  They are pretty amazing fish.