Members of the family Poeciliidae are what many call “livebearers”.  Live bearing meaning they do lay eggs as most fish do, but rather give birth to live young.  But this is not to be confused with live-bearing you find in mammals – which is different.

Most fish lay eggs.  The females and males typically have a courtship ritual that ends with the female’s eggs (roe) being laid on some substrate, or released into the water column, and the male’s sperm (milt) are released over them.  Once fertilized the gelatinous covered eggs begin to develop.

Everything the developing young need to survive is provide within the egg.  The embryo is suspended in a semi-gelatinous fluid called the amnion.  Oxygen and carbon dioxide gas exchange occurs through this amnion and through the gelatinous covering of the egg itself.  Food is provided in the form of yolk, which is found in a sac attached to the embryo.  There is a second sac, the allantois, where waste is deposited. When the yolk is low and the allantois full – it is time to hatch.  This usually occurs in just a few days and often the baby fish (fry) are born with the yolk sac still attached.  Parental care is rare, they are usually on their own.

With “livebearers” in the family Poecillidae it is different.

There are advantages to this method.  The eggs are protected inside the mother, and she obviously provides parental care to her offspring.  However, this does make her much slower and an easier target for predators.  There is some give and take.

This differs from the “live-bearing” of most mammals in that there is still an egg.  Mammals do still have a yolk sac but feeding and removing waste is done THROUGH THE MOTHER.  Meaning the embryo is attached to the mother via an umbilical cord where the mother provides food and removes waste trough her placenta.  There is no classic egg in this case.  I say most mammals because there are two who live in Australia that still do lay eggs – the platypus and the spiny anteater, and the marsupials (kangaroos and opossums) are a little different as well – but marsupials do no lay eggs. 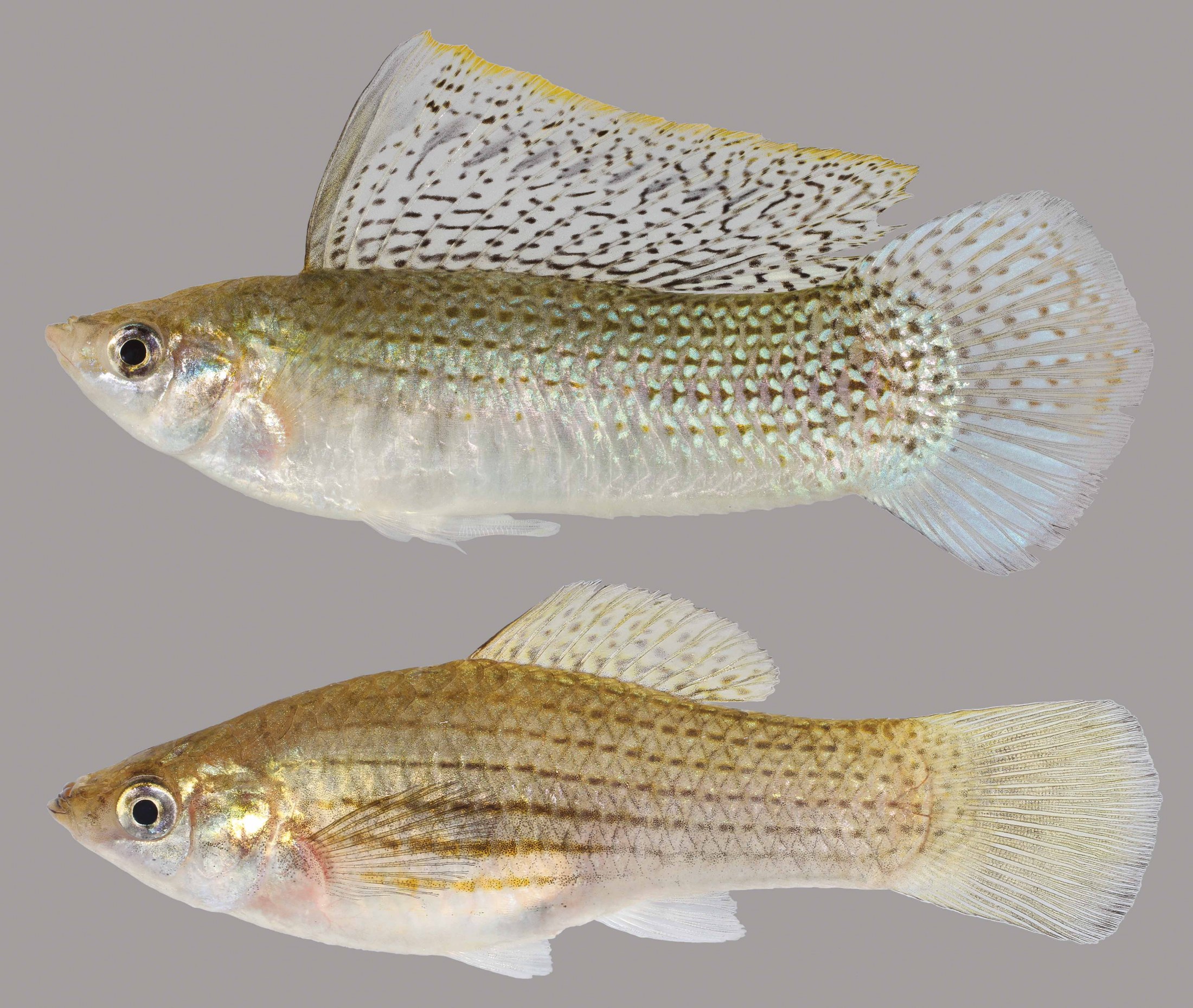 Sailfin Molly. The male is the fish above with the large “sailfin”. Note the gonopodium on his ventral side.
Photo: University of Florida

The livebearers of the family Poeciliidae are ovoviviparous.  They are primarily small freshwater fish that are very popular in the aquarium trade.  But there are two species that can tolerate saltwater and enter the estuaries of the northern Gulf of Mexico: the sailfin molly and the mosquitofish.

The Sailfin Molly (Poecilia latipinna) is the same fish sold in aquarium stores as the black molly.  The black phase is quite common in freshwater habitats, but in the estuarine marshes the fish is more of a gray color with lateral stripes that is made up of a series of dots.  They are short-stout bodied fish and the males possess the large sail-like dorsal fin from which the species gets its common name.  The females resemble the males albeit no large sailfin and most found are usually round and full of developing eggs.  They are very common in local salt marshes and often found in isolated pools within these habitats.  The biogeographic range of this species is restricted to the southern United States, reported from South Carolina throughout the Gulf of Mexico.  One would guess temperature may be a barrier to their dispersal further north along the Atlantic seaboard. 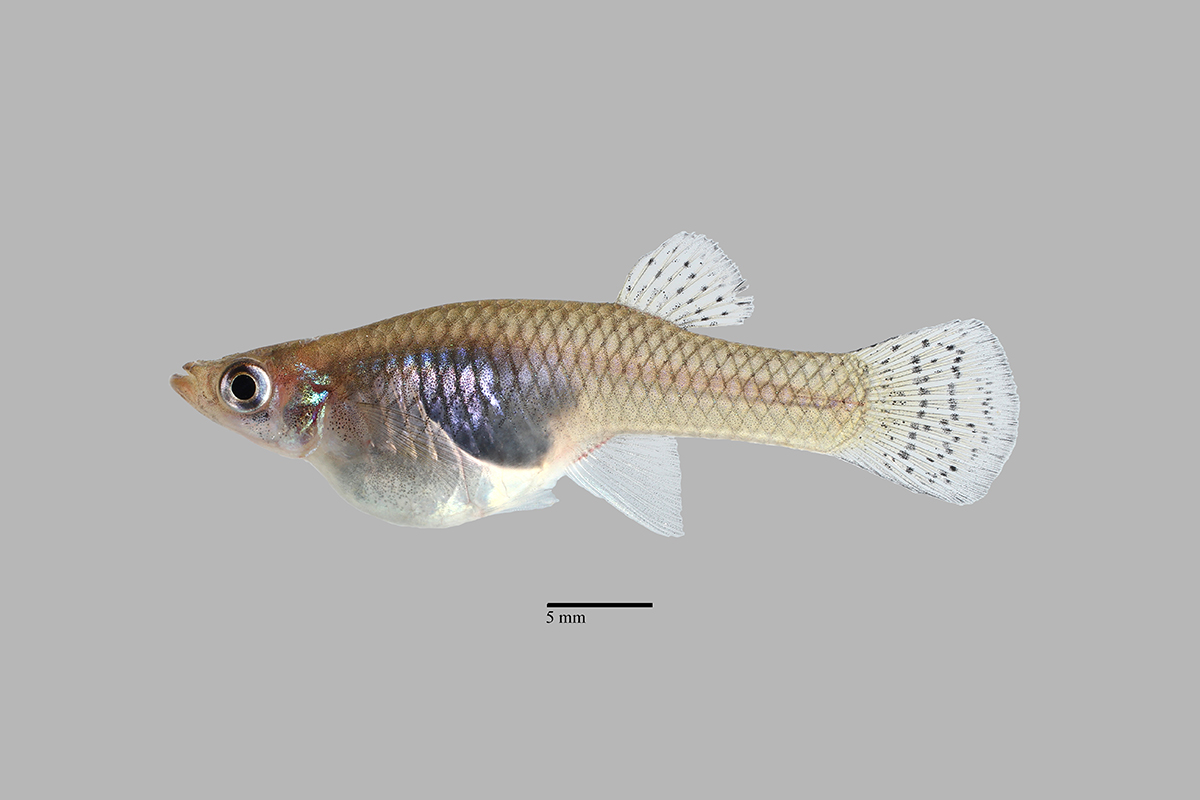 The mosquitofish.
Photo: University of Florida

The Mosquitofish (Gambusia affinis) is familiar to many people whether they know it or not.  Those who know the fish know they are famous for the habit of consuming mosquito larva and some, including our county mosquito control unit, use them to control these unwanted flying insects.  For those who may they are not familiar with it, this is the fish frequently seen in roadside ditches, ephemeral ponds that show up after rainstorms, retention ponds, and other scattered bodies of freshwater within the community.  Most who see them call them “minnows”.  There is always the question as to “where did they come from?”  You have a vacant lot – it rains one day – these small fish show up – where did they come from?  The same can be said for community retention ponds.  The county comes in a digs a hole – it rains one day, and the retention pond fills – and there are fish in it.  One explanation to their source is the movement of fish by wading birds, where the fish incidentally become attached to their feet.  Again, they are often released intentionally to help control local mosquito populations.  This fish is found in our coastal estuaries but does not seem to like saltwater as well as the sailfin molly.  It is found in cooler water ranging throughout the Gulf and as far north as New Jersey.

Both of these fish make excellent aquarium pets, and the sailfin molly in particular can be beautiful to watch.