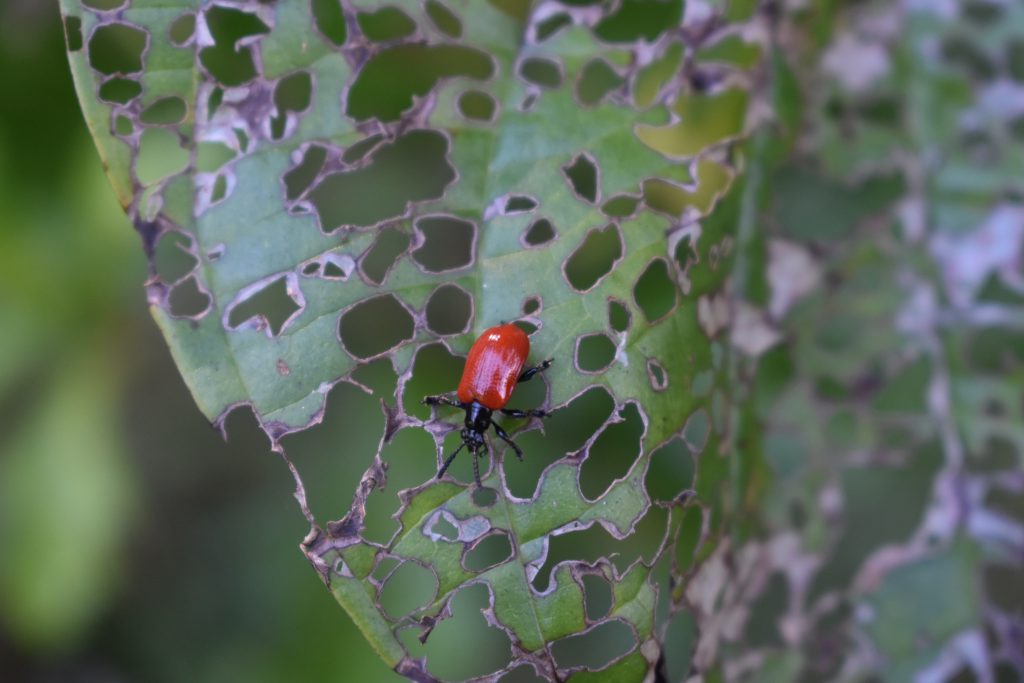 I’m sure many of you could easily recognize air potato with its winding vines and heart-shaped leaves climbing high along roadsides, fencerows and natural vegetation, but could you recognize its key predator, the air potato leaf beetle? Believe it or not, a small, red leaf-feeding beetle was introduced and is here to help control the invasive air potato vine!

The Issue with Air Potato Vine

Air potato (Dioscorea bulbifera) is a plant species that is native to Asia and was first introduced to the United States as a landscape plant but has now become one of Florida’s most problematic invasive plants. Air potato has spread to 60 of the 67 counties in Florida, including many in the Panhandle. Air potato vines can grow up to 8 inches per day! The dense vines smother vegetation and displace native plants, trees and animals. The air potato vine is on the Florida Noxious Weed List. This means that is illegal to plant, propagate or move the air potato unless you have a permit.

The air potato vine spreads by vegetative reproduction. This is through the formation of aerial tubers, or bulbils that are formed in the leaf axils. The aerial tubers are roundish and vary in size. In addition to aerial tubers, air potato also produces underground tubers, making control that much more difficult. During the winter, the aerial tubers will drop to the ground and give rise to new vines in the spring.

Park managers and homeowners throughout Florida have battled with the air potato as its covered our landscape. For years, the primary means of control were by manually pulling, digging and destroying the tubers or by herbicide applications, until recently.

Another method for controlling invasive plants is with classical biological control. This method involves searching for insects that feed exclusively on a plant in its native range and releasing them in an area that has been invaded by the plant. Scientists with the United States Department of Agriculture discovered the air potato leaf beetle (Lilioceris cheni) that feeds on air potato in its native range of Asia. After extensive testing, scientist found that the beetle is species-specific and poses no risk to other plant species.

In 2012, air potato leaf beetles were first released in Florida to help battle the air potato.  Now, according to the Florida Department of Agriculture and Consumer Services (FDACS), they are officially established in the state!  This means, they are here to stay and research has shown they are helping!

While you likely won’t see the beetles now, because they are overwintering (a period of suspended development), look for them in the spring! Adults are bright red with a black head and legs and about the size of your pinky fingernail. The females lay white, pale eggs on the underside of leaves. The egg-laying process causes the leaves to curl and cup. In addition to that, larvae feed on the leaves skeletonizing them. This feeding by the beetle negatively affects the growth and reproduction of the plant. 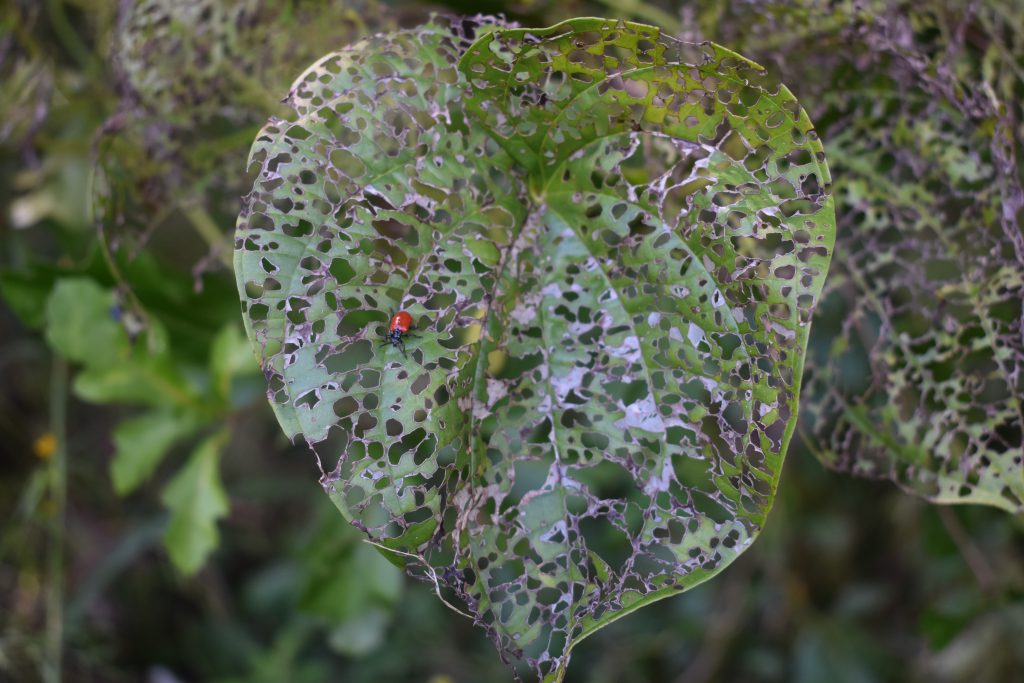