Wildlife on the Beach in February

It is now mid-winter and much colder than our trip in January.  During February’s hike the temperature was 44°F, compared to 62°F in January.  It was overcast with a cold breeze from the northeast – again, colder.  When conditions are like this I am not expecting to see much.  If I did find something I would expect it to be one of our warm blood friends, mammals or birds, and even they would prefer a day with more sun and less breeze.  But I came to see what was out roaming.  So, a hike I made. 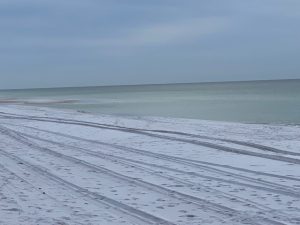 The Gulf front at Park East near Big Sabine.

This month I hiked the Big Sabine area east of Pensacola Beach.  It began with a shore walk along the Gulf and then a transect across the different dune fields to the marshes and seagrasses along the Santa Rosa Sound.

There was no one out today.  You could see footprints in the sand, and it had that characteristic “squeak” sound of fresh sand or snow.  The only wildlife I saw on the Gulf side was a group of pelicans sitting on very calm water, obviously enjoying the morning.  However, you could see footprints of mammals that had come earlier.  There are raccoons, armadillos, mice, coyotes, and occasional reports of otters on Santa Rosa Island.  There were a lot of skunks on the island prior to Hurricane Ivan (2004), but I have not seen any since.  There have been reports of bears on the island as well.  I have never seen one, nor their tracks, so do not think they are frequent visitors.  I did find a dead shark tossed up on the beach by a fisherman.  Not sure if they were trying to catch it or not. 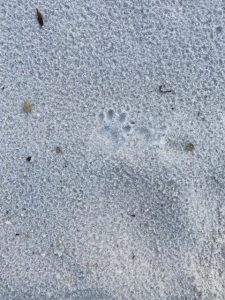 A variety of mammals are found on barrier islands. Most move at night and you know they are there only by their tracks. 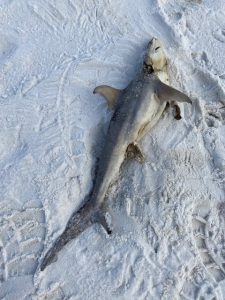 This small shark was found on the beach during the hike. I am not sure why they did not return it to the Gulf.

As I began my transect across the island I ventured into the secondary dune field, which during summer is extremely hot. This part of the island reminds me somewhat of a desert.  Very dry, open, and at times very hot.  Like the desert it comes alive more at night, but during winter you might see animal movement during the warm parts of the day.  I did see mammalian tracks, which included humans and dogs.

This dune field also holds ephemeral ponds which can harbor a variety of life during the warmer months.  Today I only found one blooming yellow-bladder wort as well as other carnivorous plants along the bank such as sundews and ground pines. 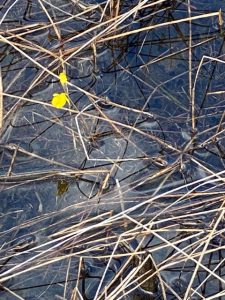 Yellow bladder wort is one of the small carnivorous plants that live on our barrier islands. 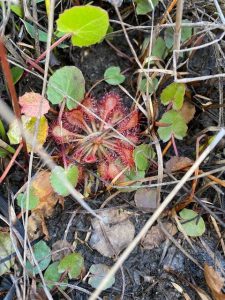 Sundews are another one of the small carnivorous plants found here.

From the open dune field, you venture into the tertiary dunes and the maritime forest.  Trees grow here but their growth is stunted due to the salt content in the air.  None the less, pine and oak hammocks liter this dune area providing great hiding places for wildlife.  Though we did not see any today, I am expecting to find some as the weather warms.

The backside of the island is where you will find the salt marsh.  This brackish wetland harbors its own community of creatures, which were not visible today but will be in the spring.  Between the tertiary dunes and the marsh runs a section of the Florida Trail.  Hikers can walk this section and observe wildlife from both ecosystems. 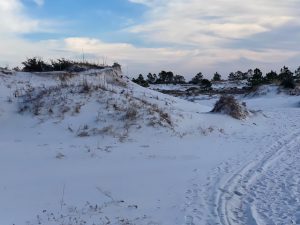 The larger dunes of the tertiary dune field. 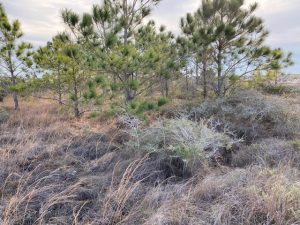 Tree hammocks are common in the tertiary dune fields and provide good places for wildlife.

I eventually reached the Sound and the seagrass beds that exist there.  Today, here was nothing really moving around, though I did find a dead jellyfish drifting in the waves.  As the island wildlife tends to hideout the winter in burrows, the fish move to deeper water where it is warmer. 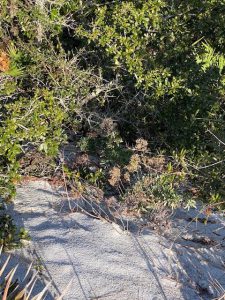 The backside of these large dunes drop quickly back to sea level. 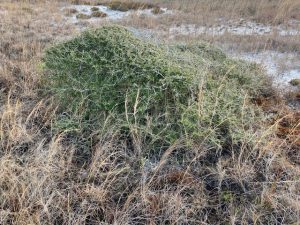 Many plants in the tertiary dunes exhibit “wind sculpting”. It appears someone has taken a brush and “brushed” the tree towards the Sound. 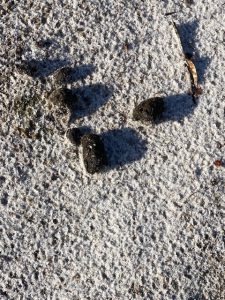 Scat is another sign used to identify mammal activity in the dunes. 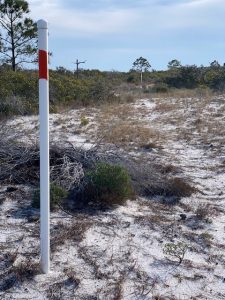 Portions of the Florida Trail cut through the tertiary dune field of Big Sabine. 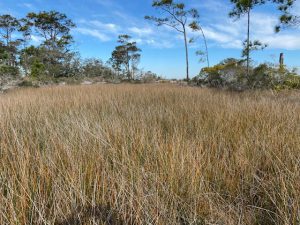 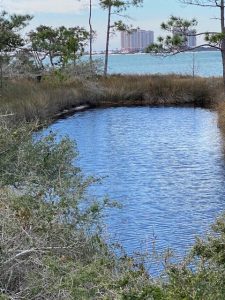 This holding pond is a remnant of an old fish hatchery from the late 1950s and is primarily freshwater. 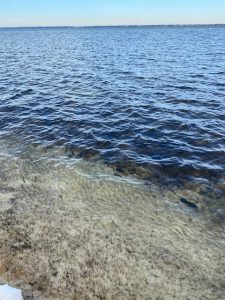 Seagrass meadows can be found in Santa Rosa Sound and harbor a variety of marine life. 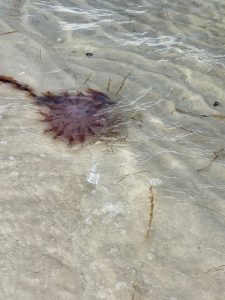 Jellyfish are common on both sides of the island. This one has washed ashore on Santa Rosa Sound.

There was little out today other than a few birds.  We will see what late winter will expose next month.