Salt Marshes – The Land of the Wet and Muddy

When exploring local coastal environments, the salt marsh is one not frequently visited by residents.  When first seen, the large field of grass appears inviting.  But when you reach it appears impenetrable, full of bugs and snakes, and there must be an easier way around. 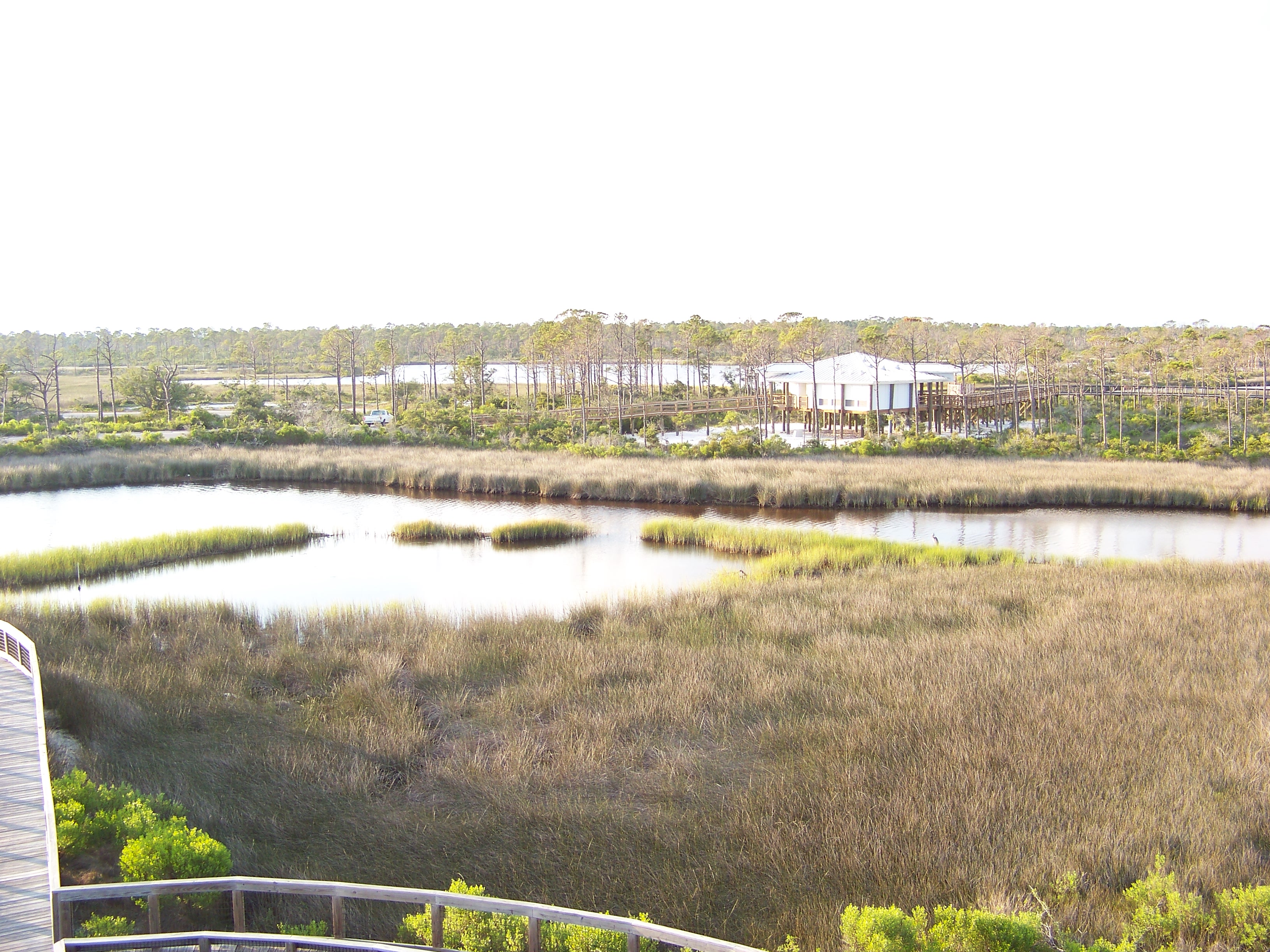 The Salt Marsh – the land of the wet and Muddy
Photo: Molly O’Connor

There are three ways to access a salt marsh.  One, to just begin walking into the field of grass, pushing your way through like a boat on the ocean.  Second, using a trail cut but someone else, that meanders its way to the high ground or open water.  And third, from the open water following a creek.  This can be done on foot or by a paddle craft. 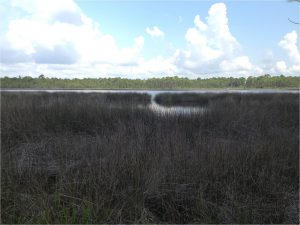 Entering the salt marsh can be tricky.
Photo: Rick O’Connor

If entering by foot into the field of grass, the explorer is first met with a tall grass with a pointed end – black needlerush.  This rather stiff, thin, cylinder-shaped grass has a good name, the pointed end is sharp and hurts as you begin to move it out of the way with your forearms.  When in college I was told “you might want to wear jeans”.  I did not see wearing jeans in the summer heat as a good idea so, chose not to, but understood quickly why they recommended it.  Honestly, I am not sure it would have helped anyway.  Needlerush pokes your arms, legs, and care must be taken and avoid bending over to pick something up, else you will get a poke in the face or eye. 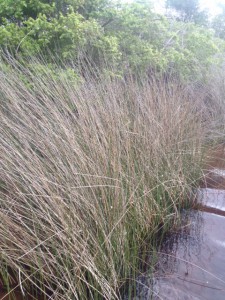 Black Needlerush is one of the two dominant plants of our salt marshes. Photo: Rick O’Connor

After quickly meeting black needlerush you meet the mud.  They do not call it the land of the wet and muddy for nothing.  They mud is like pudding and some sections feel like there is no solid ground.  This mud is a slate gray color, smells like rotten eggs, and you can sink into it up to your knees in places.  Shoe selection in a place like this is important.  Many an explorer has placed their shoe covered foot into the mud only to bring up a shoeless foot the next step.  Shoes that can tied or synched to the foot are best.  They need a good thick bottom to protect the foot from shells, like oysters.  I will tell you “crocs” are not what you want. 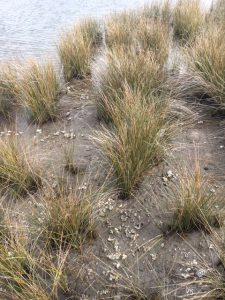 The sediment in a marsh is not always as solid as it looks.
Photo: Rick O’Connor

The rotten egg smell is the gas hydrogen sulfide, produced by bacteria breaking down organic material trapped within the marsh.  And much becomes trapped here.  By definition a marsh is a wetland that is dominated by grasses rather than trees.  Being a wetland, it is low in elevation and holds water either from rainwater run-off or from the incoming tide.  As the water recedes, leaf litter, animal carcasses, and other debris become trapped in the marsh.  In fact, the ability of the marsh to hold this decaying layer of mud plays an important role in keeping the open water clear.

As you labor your way across the marsh, pulling each footstep through the mud while moving the sharp grass, you may see signs of life.  Most animals have trouble walking through the grass and mud as well and choose another route.  But the density and biomass of the open marsh is impressive.  Trying to count the blades of grass would be like trying to count the stars in the sky.  It is a very biologically productive place.  One creature you may encounter is the bird known as the clapper rail.  This brownish bird blends in well in the sea of grass and often builds their nest here.  When you come upon them, they will let out a loud squawking sound that will honestly terrify you at first.  Sometimes they fly, sometimes they move to a new location, sometimes they hold their position and continue to try and scare you away. 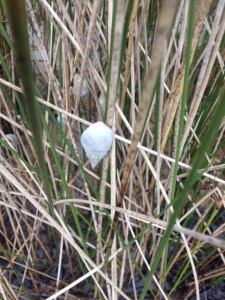 The marsh periwinkle is one of the more common mollusk found in our salt marsh. Photo: Rick O’Connor

Another common creature seen is the marsh periwinkle.  This small white snail is often seen on the blades of needlerush.  As the tides rises, so does the periwinkle, crawling up the grass to avoid predators like the blue crab and diamondback terrapin.  At low tide they are on the surface of the organic mud feeding on bits of decaying material.  Again, caution if you are going to bend over to look for them.  You may get a needlerush in the eye!

There are times as you are crossing you will come to an open area with little or no grass.  These are known as salt pans and are areas with lower elevation that the surrounding marsh.  Saltwater lies here during high tide and low.  As the pool of water evaporates the salinity of the remaining water increases and becomes too salty for most plants to grow.  It becomes a “dead zone” within the marsh.  There are a few salt tolerant plants that do grow here.  You may see the tracks of other creatures exploring, like raccoons, but otherwise it is a break for you from the constant shoving of needlerush and you step in there.

Occasionally you will cross the opposite in elevation.  A high ridge of quartz sand where small shrubs like salt bush or even a small oak can be found.  These little oasis’s can be places where other travelers of the marsh will rest.  Fiddler crabs, cactus, and maybe even a basking snake could be found here. 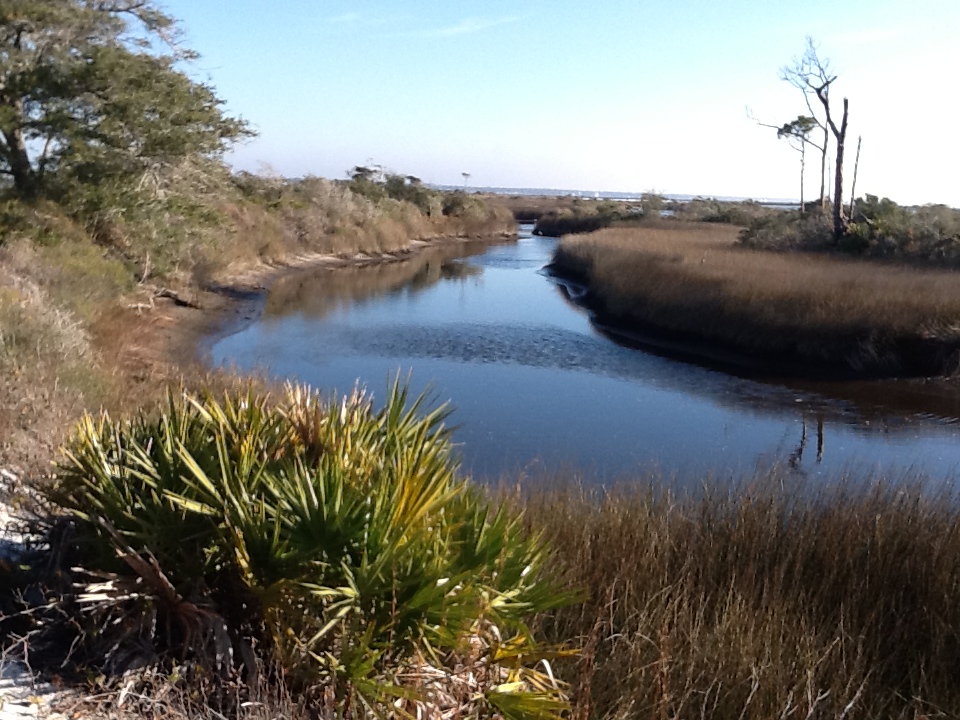 A finger of a salt marsh on Santa Rosa Island. The water here is saline, particularly during high tide. Photo: Rick O’Connor

There are times when you will cross a creek.  These creeks meander their way through the marsh and to the open water.  Many travelers, for obvious reasons, choose to follow these routes.  Some creeks are shallow and full of mud where you may sink above your knee.  Others are a bit deeper and have more solid bottoms of sand.  Walking through the water can give some relief from the needlerush.  Here you will see several species of fish.  Most are killifish or mullet, but as you get closer to the open water you might find redfish or flounder.  It is much easier to see the periwinkles here.  You will also notice the ribbed mussels anchored near the base of the needlerush.  There are oyster clumps scattered here and there and huge colonies of fiddler crabs.  The creeks are good hunting grounds for the stilted legged birds such as the great blue heron and American egret.  Clapper rails often nest along the creek edges and there is a lot of sign of raccoons and sometimes otters. 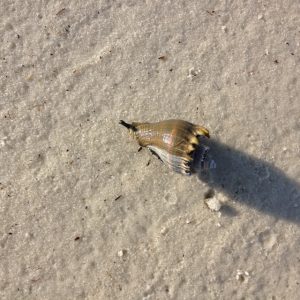 The “snorkel” is called a siphon and is used by the snail to draw water into the mantle cavity. Here it can extract oxygen and detect the scent of prey.
Photo: Franklin County Extension

The crown conch is a frequent visitor to the creeks.  This predatory snail moves slowly across the sand and mud seeking other mollusks to feed on.  Often you will find their shells not inhabited by them but rather the striped hermit crab, a scavenger in this world. 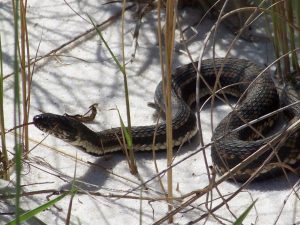 Many fear the marsh due to its reptile community.  Over the years of leading hikes here I have heard “are there any snakes here?”.  There is only one resident of the salt marsh – the Gulf salt marsh snake.  This is a nonvenomous member of the watersnake group known as Neroidia and are more nocturnal in habit.  That said, the venomous cottonmouth has been seen here.  They are most often seen on one of the high sandy banks, coiled and waiting for potential prey to swim by.

Alligators will venture into salt marshes, but I have only seen few in my years of exploring them in the Pensacola area.  They tend to be afraid of people and want to avoid us.  Once I saw one in a sandy area before I entered the marsh.  It was pointing left with one foot off the ground and not moving – it was frozen in space.  I had learned that animals tend to go through what I call the “3 Fs” when they detect a predator.  Freeze – Flight – Fight.  This one was at F1 – freeze.  It thought I was a predator and just as well.  If I tried to approach it, theoretically it would have moved to F2 – flight, and would have made a hasty escape.  But I chose not to test that. 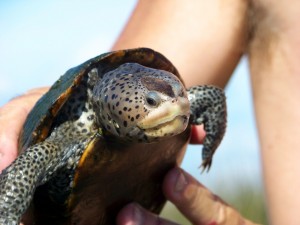 There is a resident turtle here known as the diamondback terrapin.  However, it is very elusive and difficult to find.  It is the only resident brackish water turtle in North America.  Though I have seen terrapins in the water, and more rarely on the beach, I do find evidence of their presence by tracks on the beach and nests that have been predated by raccoons.  I did once see one basking on a log. 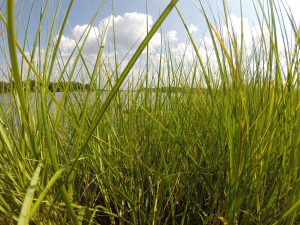 If you follow the creek, you will eventually reach open water.  Here the marsh converts from a sea of black needlerush to a zone of shorter, greener, more flexible smooth cordgrass.  The cordgrass is home to many of the creatures we have mentioned.  Killifish, crabs, and snails are abundant.  The silt birds frequently this zone hunting for their prey, and you might find additional clams and snails.  You might find more open water species as well, like gulls, sand pipers and plovers, and maybe a horseshoe crab.

Though the road is tough, the experience is unique and worth the trip.  Many prefer to enter the marsh using a known trail or a paddle craft in the creek.  There is a lot less needlerush to poke and mud to sink in doing it this way.  However you visit, it is an amazing place.  The land of the wet and muddy.