It is 1922 and you are rowing your wooden skiff from a small beach house near what will become the town of Gulf Breeze Florida across Santa Rosa Sound on your way to Santa Rosa Island.  The water is 10-15 feet deep, and you can see the bottom.  It is covered with a lush garden of seagrasses with numerous silver fish jutting in and out of the blades.  Most are there only for a moment before they are lost again.  You notice a brown colored puffer fish hovering over the grass as you past by.  Maybe a small sea turtle grazing, or a tannish colored stingray flying over the meadow.  As you get closer to the island, which is covered with sand dunes reaching 20-40 feet in height and shrubby live oak and magnolia trees, you begin to see Florida conchs and horseshoe crabs, maybe fields of bay scallops littering the grass in every direction.

Sounds amazing, doesn’t it?  And it was actually like this once.

I asked this question of some ole timers who grew up on Bayou Texar in Pensacola decades ago.  You might be surprised to learn that Bayou Texar resembled this scene.  They described water that was between 10-15 feet deep, had sand and seagrass on the bottom, and you could catch shrimp the size of your hand by tossing out a cast net.  But Bayou Texar no longer looks like this.

Most told me the first thing they remember was a change in the water clarity.  The water became more and more turbid.  Then the shrimp went away, then some of the fish.  They mentioned several species of fish that no longer exist there.  The cause of the turbid water? … Development.  They were developing all around the Bayou after World War II and that was when things began to change.  They mentioned the road going in on the east side of the bayou as the point when turbidity issues began.  The houses came later. 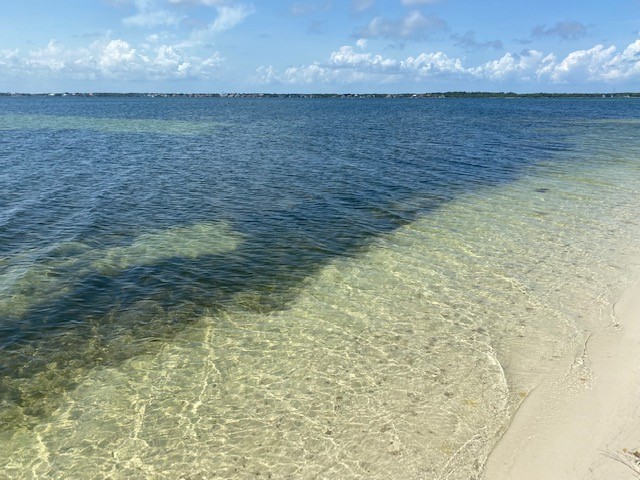 With little rain over the last few days the water clarity was excellent and you could see the seagrass very well.

The city of Gulf Breeze was founded in 1935 and was originally called Casablanca because of a white house there that could be seen from Pensacola.  As the community grew the waters became more turbid as well, and the amazing underwater garden declined.  But this was not just happening in Gulf Breeze and Bayou Texar, it was happening everywhere.

But it was bound to happen.  As the human population grows more space is needed for homes, businesses, and schools.  More roads are needed to reach these locations and a bridge was placed to reach Santa Rosa Island, so you no longer had to paddle a skiff to reach it.  Once on the island, growth continued.  More homes, roads, and businesses.  With more run-off, turbidity, and the garden continued to decline. 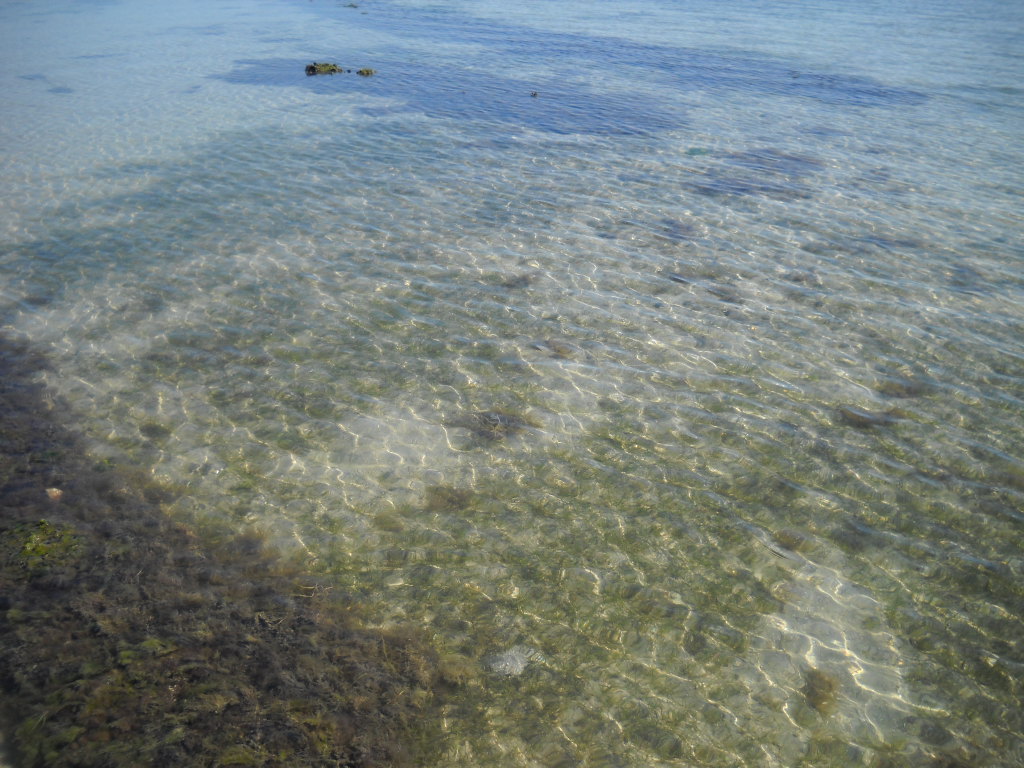 Shoal grass. One of the common seagrasses in Florida.
Photo: Leroy Creswell

The thing was we did not know at the time that (a) we were causing this decline and (b) how much we really wanted that garden there.  I often hear the question “what happened to all of the blue crabs?”  I think they know the answer, but they remember a time when blue crabs were more abundant, can you imagine what it probably was like for our friend paddling across in 1922.  And there has been a noticeable difference in crab numbers in their life.  There are folks, including myself, who remember bay scallops in the Sound and horseshoe crabs on what they called “Horseshoe Crab Island” in Little Sabine.  This is one of the amazing things about this story – how fast the decline was.  Now we better understand how important these underwater meadows were to the function of a healthy estuary and there is interest in restoring them. 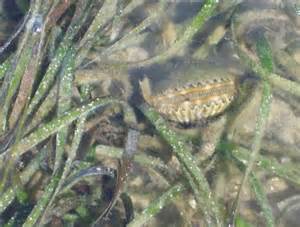 To restore seagrass, you first have to understand, and mitigate, what is causing the decline.  Seagrasses are vascular plants that possess roots, stems, and leaves.  They produce flowers and sexually reproduce using seed.  This is not the case with seaweeds, which are nonvascular and lack the above, but they often mistakenly called seaweeds.  There are three species that dominate our seagrass meadows in the Florida panhandle and a fourth one that is not as common.  The uncommon one has a round blade like a pine needle and is called manatee grass (Syringodium filiforme).

The three common species all have flat blades.  Widgeon grass (Ruppia maritima) has blades that branch.  It tolerates a wide range of salinity and is more abundant in the upper regions of our estuaries.  Shoal grass (Halodule wrightii) has a single flat, non-branching, blade that is very narrow (< 3mm) and resembles human hair.  Turtle grass (Thalassia testudinum) is also flat, non-branching, but wide (>3mm) and resembles St. Augustine grass.

Like other grasses, these plants require sunlight and nutrients to survive.  They also need to grow in the low energy locations of our estuaries.  Sunlight, of course, is key for photosynthesis and clear water is the key to getting enough of it.  15-25% of the sunlight reaching the surface of the water must also reach the bottom where the grasses are.  Nutrients can be obtained through the water column and sediments.  The stems run horizontal beneath the sand and are called rhizomes.  They help hold sediments in place increasing the much-needed water clarity as well as reduce shoreline erosion.  The blades extend from the substrate up into the water column bathing in the sunlight.  They are covered by microscopic plants and animals that resemble scum when you run fingers over them but provide mush of the food for the creatures that live there.

And live there they do.

It has been estimated that it least 80% of the commercial and recreational important shell and finfish spend at least part of their lives in the seagrass meadows.  Ducks, manatees, and sea turtles are some of the grazers on these plants and sea horses, pipefish, and pinfish are abundant. 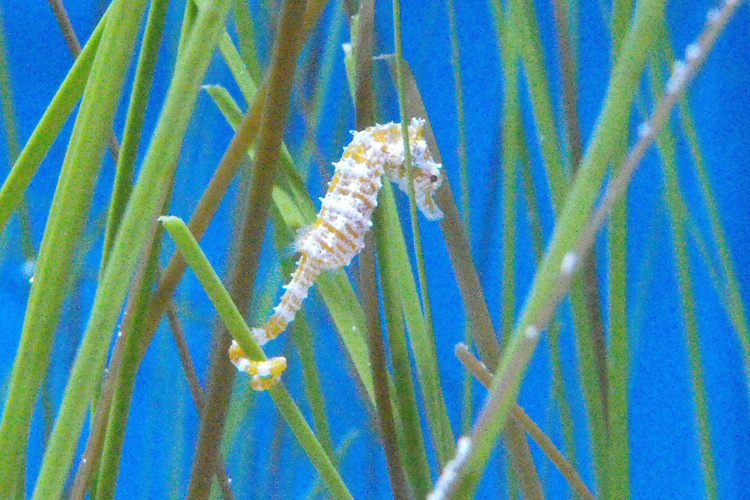 When humans began developing around the Sound in the 1940s and 1950s the sediment run-off decreased water clarity, cutting off the much-needed sunlight, and in some locations covered the grasses.  Excessive nutrients from our fertilizers, and detergents increased phytoplankton growth which in turn decreased water clarity more and enhanced the growth of macroalgae which smothered the meadow like a blanket.  Hot water discharges from industrial processing along the shores stressed the grasses as did prop and anchor scars from power boat plowing through and anchoring in them.  These same boats and jet skis increase wave energy with their wake, as do seawalls when waves reflect off of them.  Marinas, bridges, and docks all required dredging in the meadow which not only removed the grasses but increased turbidity even further.  All of this triggered the decline of these amazing gardens.  And with them the decline of the cherished fisheries as well. 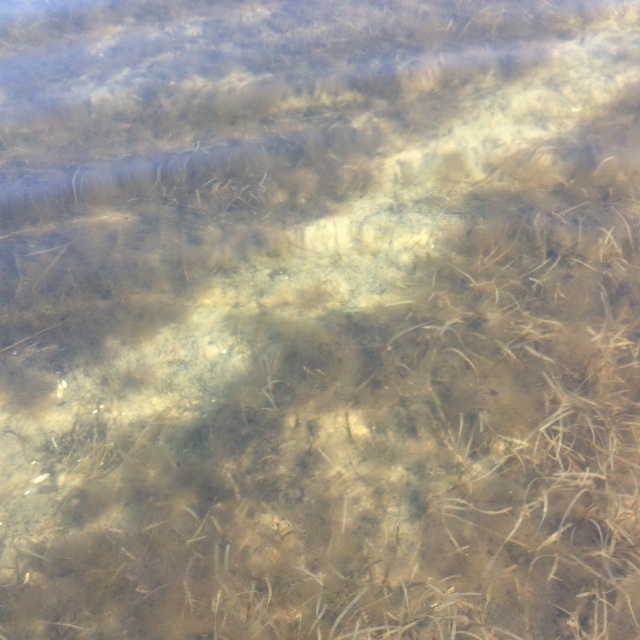 In recent years the Florida Fish and Wildlife Conservation Commission (FWC) conducted surveys across the state to assess the status of our seagrass beds.  They estimated that there was a little over 2 million acres of seagrasses in Florida waters, 39,000 in the western panhandle.  Though much of these beds appeared to be stable, or even increasing acreage, those in the panhandle were still in decline and all of Florida’s seagrass gardens were less than the acreage in the 1950s.

In this study they found the Perdido Bay had primarily shoal grass.  Big Lagoon and Santa Rosa Sound were a mix of shoal and turtle grass, with some manatee grass reported from Santa Rosa Sound.  Aerial imagery found –

The numbers in the lower portion of the bay are encouraging and suggest some behavior changes we made in recent decades have helped.  Both development and monitoring continue.  We will see.

What can be done to help restore the garden?

With a little effort on our part, we can enhance some of the positive numbers we have seen in seagrass assessments and hopefully turn the current negative trends into positives.  Maybe the garden will return.  For more information on how you can apply any of these principals contact your county Extension office.