Part of our job at Extension is to help enhance science literacy.  Often we write about natural history topics of interest to community that focus on interesting wildlife or an environmental issue or on topic we think the public should know more about.  These articles have good science in them but are often written in a way as to not be too “sciencey” so that public will not be lost in the message.  But sometimes there is a need for “sciencey” articles.  Ones that may explain things using concepts and terms that go deeper than the public usually like to go.  Not that the public cannot understand this, it is just too much like a science class from high school and not everyone enjoyed science when they were in school.  A topic they may not enjoy.  We are going to try a “sciencey” topic for this article.

Most have heard the term and usually associate it with how much salt is in the water.  They are not incorrect, and for the most part this definition will suffice when using it in conversation.  But it actually goes a bit deeper than that.   We will start with what is a salt. 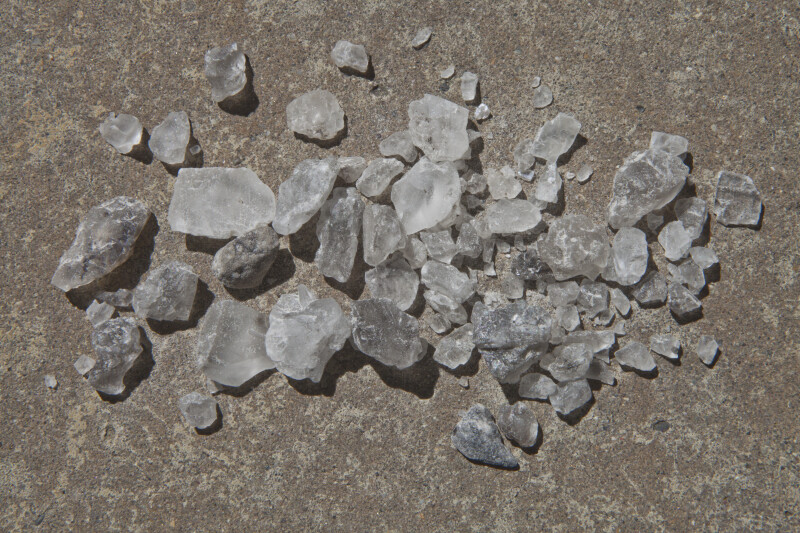 A salt is the product of an acid and a base.  For example, when you combine hydrochloric acid and sodium hydroxide you get sodium chloride (salt) and water.

Sodium sulfate (NaSO4) would also be a salt.  There are numerous salts found in the environment.  They are found in rock and mineral forms from land and the seafloor and will eventually make their way into the ocean – where of course they meet water.

Water has been described as the “universal solvent” and that is because water is a polar molecule and dissolves most things.  What does “being polar” that mean?

We understand that “polar” means opposite ends, and in this case one end is positively charged, and the other is negative.  This has to do with the alignment of the element’s hydrogen and oxygen in the molecule.  To explain the alignment would require more chemistry than we want to go into here.  But let’s just say the outer suborbital requires eight electrons to be considered stable – even that will take more discussion.

These orbits are identified by letters.  The one closest to the nucleus is an s orbital.  S orbitals can only hold two electrons.  The next orbit out will have an s orbital and a p orbital.  Again, the s can hold two, but the p can hold six.  So, the second orbit can hold a total of eight electrons – 2 in the s orbital of the second orbit and another 6 in the p orbital of the second orbit (there is not a p orbital in the first orbit).  If the atom has more than 10 electrons (2 in the first orbit and 8 in the second) then there will be a third orbit that has an s orbital (holding 2 electrons), a p orbital (holding 6 electrons) and a new orbital called d (which can hold 10 electrons).  And so, it goes.  Large atoms with lots of electrons will have lots of orbits with several orbitals holding a fix number of electrons.  This may be getting more “sciencey” than we wanted, but we will continue to plow forward to help better understand salinity.

Here is the kicker.  The s and p orbitals together hold a total of 8 electrons and the s and p orbitals of the orbit farthest from the nucleus MUST be filled for the atom to be stable.  If they are not, then the atom is looking to gain or lose electrons to do so.  Let’s look at water, we will start with oxygen.

Remember the orbit closest to the nucleus only had an s orbital and can hold two electrons, which is does.  But this leaves six electrons to place.  The second orbit has an s and an p.  S can only hold 2 electrons, so 2 of the 6 will go there.  The p can hold 6, but now the oxygen atom only has 4 electrons left (after filling the first two s orbitals).  So, it places those remaining four in the p orbital.  But the p orbital is not full.  It will hold 6 but only has 4.  It has two empty orbitals and those MUST be filled.  It needs 2 electrons from somewhere.  (see below).

Where does it find two electrons to become stable?

Hydrogen has the atomic number of 1.  It has one proton (+1) and one electron (-1).  Its orbit configuration would look like this:

Remember if you do not have enough electrons for a second orbit, there is no second orbit.  BUT as you see the first orbit of hydrogen (which needs 2) only has 1 electron.  It is not full.

Let’s look at another example to first understand how MOST atoms deal with this problem.

Chlorine has the atomic number of 17.  Seventeen protons (+17) and seventeen electrons (-17).  They would fill their orbits, and orbitals, as follows.

You can see that the last sp for both are not full.  However, if sodium “gives” the electron in s3 to chlorine then it’s s3 orbital is gone and the sp2 for the second orbit of sodium would be full – stable.  Likewise, if chlorine “accepted” that electron its s4 orbital would be full – stable.  And this is what happens.  However, this throws the electronic balance off.

Water is a bit different.

You can see oxygen needs 2, but hydrogen does not have 2 to give AND if it gives the ONLY electron, it has it will no longer exist.  So, it SHARES its 1 electron with oxygen.  The hydrogen atom will allow its lone electron to orbit the last orbital of oxygen BUT it must circle back and orbit the hydrogen nucleus as well.  To get the required 2 electrons that oxygen needs to fill its sp2 it will need another hydrogen atom to do so – hence H2O.  When sharing electrons to form a compound we call this a covalent bond.

To graphically illustrate how the electrons fill the last sp orbitals of an element they use what is called the electron-dot.  It would be laid out as follows:

The first two electrons would fill the s orbital.  Then any additional electrons filling the p’s BUT you would first place an electron in each p and then come back and fill (two max) in clockwise form.  The number AND ALIGNMENT of the electrons would be represented by dots.

In the example just given – sodium – the atomic number is 11.  The eleven electrons would be placed as follows

You can see the open space for one electron to fill this and complete the two for each.  Sodium would GIVE it’s one electron to chlorine (having a full s2p2 with eight dots all around) forming an ionic bond known as sodium chloride (NaCl) or salt.  The next inner orbit of sodium would have its sp orbitals filled and would be stable but charged due to having more protons than electrons.

This alignment would force the two hydrogen atoms SHARING electrons to do so NEXT to each other.

The first impact of this situation is that water molecules attach to each other.  The positive hydrogen end of one water molecule attaches to the negative oxygen end of another.  All of the water molecules bond together and form a lattice of water molecules – like they are all holding hands.  These bonds are weak and can be easily broken if a creature is trying to swim through them, but attached they are.

A second impact is that they will disassociate (dissolve) ionic compounds that they come in contact with, like salts.  The ionic bond we know as salt – sodium chloride (Na+Cl–) will dissolve in water.  The positive ion Na+ is attracted to the negative end of the water molecule.  The opposite is true for the chlorine ion.

Salinity then is the measure of dissolved solids (or ions) in the water – not exactly salt.

How salty is the water?  What is its salinity?

We can measure this several ways. 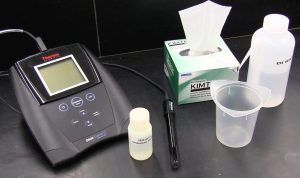 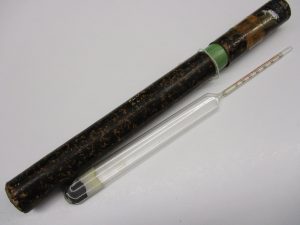 Another method is measuring the density of the water.  The more dissolved ions in the water the denser it is.  A hydrometer is a glass tube filled with a fixed amount of lead shot with a calibrated stem (you can get them with different amounts of lead to measure salinity at a wider range).  As you place it in the sample, the density of the water holds the hydrometer in specific position and you can read the salinity from the calibrated stem. 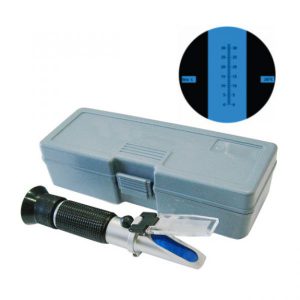 Playing off the density game.  The denser the water is the more it will refract light passing through it.  A refractometer is an instrument that uses a calibrated scale to measure salinity based on much light passing through refracts (or bends).  The volunteers monitoring salinity in our citizen science project are using this method.

Salinity is measured in parts per thousand – parts of salt to 1000 parts of water.  Using any of these instruments, or one called a salinity meter which works similar to a conductivity meter but is calibrated to salinity not conductivity, you can determine the salinity of the water.

0 parts per thousand (ppt, ‰) would be freshwater water.

Salinities between 0 and 35 ‰ would be brackish water.

These values are not set in stone.

Many scientists argue that anything above 0 ‰ is not freshwater.  I have read salinities in Perdido River as high as 4 ‰ and it did not taste like salt water.  Some would say that up to 5 ‰ could still be considered freshwater – but again, not everyone agrees.  One must also understand that in nature there are always SOME dissolved ions in the water.  It is just their concentrations are SO low that our instruments cannot detect and give a reading of 0 ‰.

Usually, the salinities in the lower parts of the Pensacola Bay system run between 20-30 ‰.

Bayou Chico usually runs between 0-10 ‰ but readings above 10 ‰ are found near the lower end of the bayou.

Note: The tide plays a role in what the salinity is at any given moment.  High tide brings in more saline water, to any system that experiences tides, and the salinity will be higher at that time.

For reasons we will not go into here, many of the plants and animals that call our waters home have specific salinities they prefer.  There is a range they can tolerate, but also a smaller range they prefer.  The biology of the upper and lower bays can be very different.  The seagrass known as tape grass, or eel grass (Vallisneria) prefers low salinities, typically under 10 ‰, and are found in the upper reaches of the bay.  Whereas shoal grass (Halodule) and turtle grass (Thalassia) prefer it above 20 ‰ and more common in the lower reaches.  Some species, like turtle grass, have a small range of salinity they can tolerate and are called stenohaline species.  Others, like shoal grass or widgeon grass (Ruppia), have a much broader range and can be found in many waterways within the bay system.  These are called euryhaline.

Sea Grant is currently looking at the salinity across the bay area (from shore) to determine how (if at all) the excessive amount of rain we have been receiving in the Pensacola area in recent years is impacting the salinity of the system.  As we described above, this could impact those stenohaline species who cannot tolerate it.  We hope to conduct a more robust salinity monitoring project in the future.

Hopefully this was not too “sciencey” and that you learned something new about the salinity of our bay.