Mangroves in the Western Panhandle 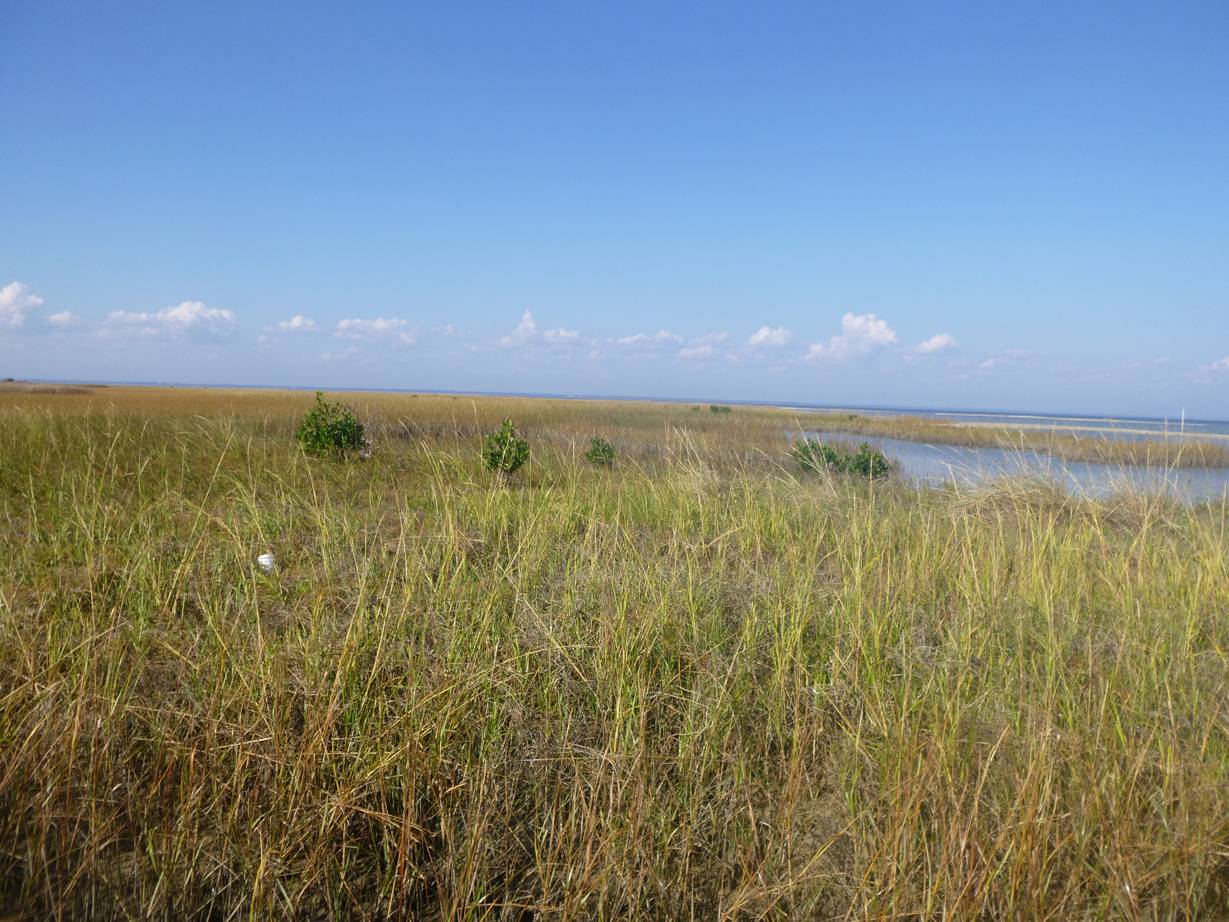 Mangroves are salt tolerant trees that are found all around the globe within the tropics.  They grow along the shorelines in areas where they are protected from ocean wind and waves – they like estuaries.  There are several species and their location along the shore depends on how long they can be submerged in water.  There is a definite zonation of these trees. 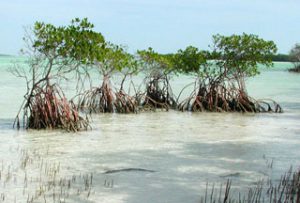 The red mangrove with their distinct prop roots.
Photo: University of Florida

The red mangrove (Rhizophora mangle) is found closest to the waters edge.  They can be identified by their prop roots which are designed to keep it standing when the water is moving and shifting the sediment below it.  These prop roots also useful during tropical storms when the wave energy increases.  The have distinct looking propagules, which are elongated floating seeds which allows the plant to disperse their offspring using the currents and tides.  The propagules often wash ashore on northern Gulf beaches but usually in locations not conducive to growth, or they do not survive the winters.  These plants can tolerate temperatures in the 30sF for a night or two, but when it drops into the 20sF, and certainly into the 10sF, they will not survive.  Despite not being cold tolerant, they have been found growing in the northern Gulf of Mexico.  All the mangroves found in the Pensacola area have been of this species. 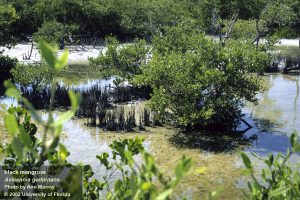 Black mangroves with their pneumatophores.
Photo: University of Florida

The black mangrove (Avicennia germinans) is found higher in the intertidal zone.  It lacks the prop roots of the red but rather has what are called pneumatophores, which resemble the knees of the cypress trees.  These pneumatophores have structures that help increase the oxygen uptake for the plant, being that the sediments they live in are quite hypoxic.  The seeds of the black mangrove are not elongated but rather resemble a bean.  These trees are more tolerant of cold weather than the red mangrove and it is they that have led the march north.  There are large stands of these trees in the Apalachicola area as well as barrier islands in Mississippi, Louisiana, and Texas.  We have not found a black mangrove growing in Pensacola as of yet. 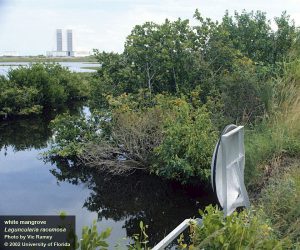 White mangroves (Laguncularia racemosa) grow more inland than the other two.  This species can grow into a large tree (up to 40 feet).  Their leaves can excrete salt allowing them to live in saltier conditions.  There are no records of this tree in the northern Gulf of Mexico to my knowledge.

Why would anyone be concerned about mangroves dispersing into the northern Gulf?

Those who are concerned are aware that is a shoreline tree that will grow and possibly block their view of the water.  They also are aware that this tree is protected by the state, and they are not allowed to remove or trim the tree without a permit.  In south Florida trimming mangroves is allowed in some counties during certain times of the year and only by certified arborist.  Those concerned are not excited about potentially loosing their water view. 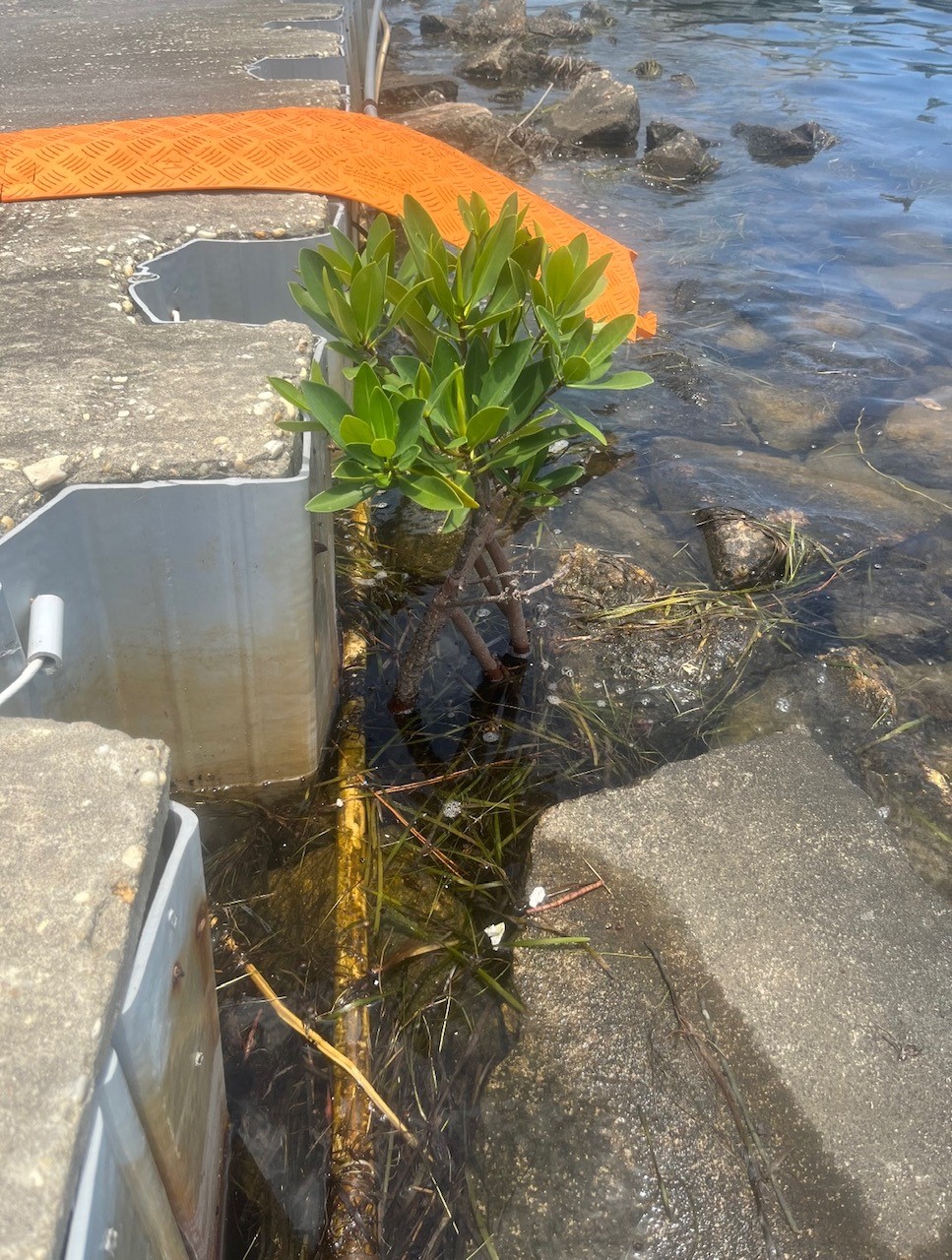 A red mangrove growing near the pass of Pensacola Bay.
Photo: Whitney Scheffel.

Why would anyone be excited about mangroves dispersing into the northern Gulf?

Folks who are excited about the possible coming of the mangroves are so because they have spent time snorkeling and fishing in and around them in more southern locations.  The prop roots of the red mangrove create an underwater wonderland of marine life.  Small fish, crabs, anemones, starfish, mollusk and more find the large openings formed by the roots as great habitat.  These in turn attract larger fish like snook, tarpon, rays, and flounder.  Many species of larger fish are popular targets for anglers.  Manatees are often found in mangrove swamps grazing on the algae and seagrasses growing nearby and enjoying the relatively calm water.  Those who have experienced this in south Florida are excited they may have it here in the north.

How many mangroves, and which species, have dispersed into the northern Gulf is still being studied.  Florida Sea Grant has partnered with Mississippi-Alabama Sea Grant and three of the National Estuarine Research Preserves to survey for mangroves in our panhandle counties and along coastal Mississippi and Alabama.  Ten transects have identified in each that are surveyed once a year by volunteers using paddle craft.  The presence of a mangrove is documented, measured, photographed and shared with the team, which is overseen by Whitney Scheffel of the Pensacola-Perdido Bay Estuary Program.  If you are interested in participating in a survey, contact your county Sea Grant Extension Agent.