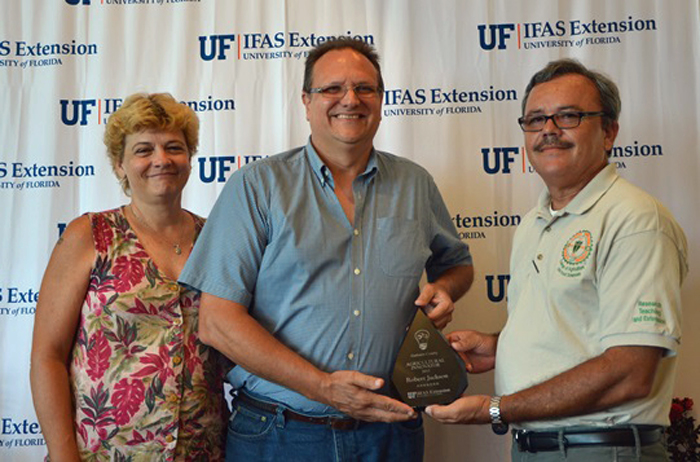 Bob Jackson was recognized as an Agricultural Innovator in Gadsden County by Alex Bolques, FAMU Extension.

All of the county honorees have distinguished themselves as creative thinkers and leaders in the agricultural community.  Robert Jackson, from Quincy, Florida was honored as an Agricultural Innovator in Gadsden County by Alex Bolques, FAMU Extension and Shep Eubanks, Gadsden County Extension Director.  Read the story of Thunder Bay Farm below.  Agricultural Innovators from other counties will be featured in Panhandle Ag e-News over the coming weeks. 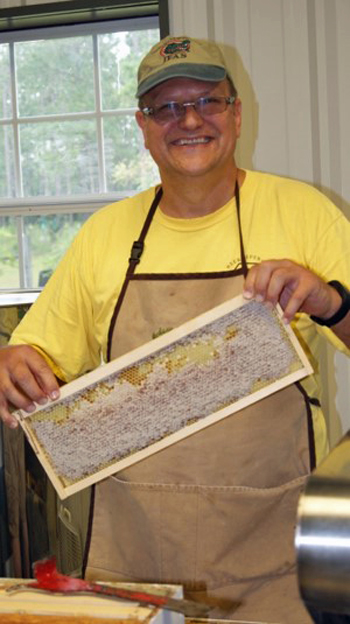 The Thunder Bay Farm in Gadsden County employs a diverse combination of agricultural practices and enterprises that integrate trees, forage, and goats as livestock in conjunction with an innovative beekeeping honey operation. The owner operator is Mr. Robert (Bob) Jackson. He became interested in honeybees as a boy growing up in River Rouge, Michigan, a suburb of Detroit.  A neighbor who kept honeybees encouraged his interest and mentored Bob in starting his own apiary.  Young Bob even petitioned the mayor and city council to be allowed to keep honeybees in his backyard.

In 2007, Bob moved to the Tallahassee area to take a job as the Telecommunications Manager with the Florida Department of Agriculture and Consumer Services.  He searched for a property where he could raise honeybees and do some farming. In 2008, he found and purchased a home on 42 acres with 15-year-old timber in western Gadsden County. He began to improve the agricultural aspects of the property by planting persimmons, pears, apricots, and other fruit trees. He also planted 20 satsuma trees and installed a micro-jet irrigation system with automatic timers. Targeting each tree with water rather than watering a large area with traditional systems increases the efficiency of water usage. He also began working with about 40 honeybee hives.

Honeybees have been an integral part of the farm since the beginning. In addition to maintaining about 45 hives on the farm, Bob also places hives at “out-yards,” other locations in the vicinity. He now maintains about 80 hives. In 2013, he had a new 30 x 60-foot honey house/shop built. Although the entire shop is climate controlled, one third of it is finished with washable metal walls and is set up with honey extraction equipment.  The other two thirds of the building is used as a shop where he builds bee hives and stores supplies. A 12-foot roll-up door allows Bob to drive a tractor with a pallet of honey supers into the building. A pallet jack is used to move the pallet through another 12-foot roll-up door into the honey house section of the building. This has reduced the amount of physical labor required to move honey supers around and improved the overall process of harvesting honey.

The following is a brief outline of the Thunder Bay Farm honey extraction method: 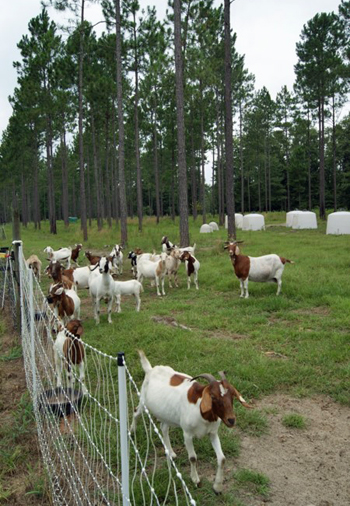 Since purchasing the property in 2008, Bob has worked with county foresters from the Florida Forest Service. He developed a forest management plan and soon implemented a fifth-row thinning method.  The plan also included periodic prescribed burns. His careful and persistent efforts were recognized in 2012 when Bob was awarded Stewardship Forest Certification in recognition of his outstanding natural resource management activities under the Florida Forest Stewardship Program.

In 2011, Bob, and his partner Jane Essig, expanded into silvopasture with the addition of a herd of meat goats which graze in the timber pastoral system. They adopted this strategy to take advantage of the growing market for goat meat in Florida, and to utilize a non-chemical means of controlling the timber understory. The goats also return nutrients to the soil. Native browse is supplemented by forage such as winter wheat, clover, bahiagrass, sun hemp, and clay peas planted in the cleared rows.  These cover crops also provide food for the honeybees.  Electrified netting is used to fence off paddocks. The netting can be picked up and moved to allow for rotational grazing.

Bob has presented topics and participated regularly at monthly beekeepers meetings held at the Gadsden County Extension Office. He has participated in FAMU Cooperative Extension’s goat programs and has attended area and regional educational opportunities including the 2014 National Goat Conference in North Carolina. He has also assisted with an IFAS beekeeping field day in Liberty County in the spring of 2015.  Bob Jackson serves on the advisory committee for the FAMU Research and Extension Center.

The practice of planting cover crops in the cleared rows improves the environment by enhancing soil quality and improving water quality by reducing run-off while providing forage for the goat herd. The use of goats to graze the understory reduces chemicals leaching into the soil and aquifer. Utilization of a micro-jet irrigation system with automatic timers conserves water and reduces run-off.

Maintaining managed honeybee colonies and following the best management practices of the Florida Department of Agriculture and Consumer Services helps improve the chances of survival for these important pollinators, and is the best way to prevent the spread of Africanized bees.  Locating hives at other locations can increase crop yields for farmers.

Bob is enthusiastic about spreading knowledge and awareness of honeybees. He has shared his knowledge on the subject of bees through topic presentations on “The Year in Beekeeping”, that illustrates the impact of honeybees throughout the year and outlines activities that beekeepers should perform at various times of the year. He has volunteered at the “Beekeeping Short Course” and “Honeybee Field Day” events. Once he starts talking about honeybees, it’s hard to get him to stop!  As a result of his land stewardship, silvopasture, and apiary efforts, we are proud to recognize Bob Jackson as the 2015 Gadsden County Agricultural Innovator of the Year.