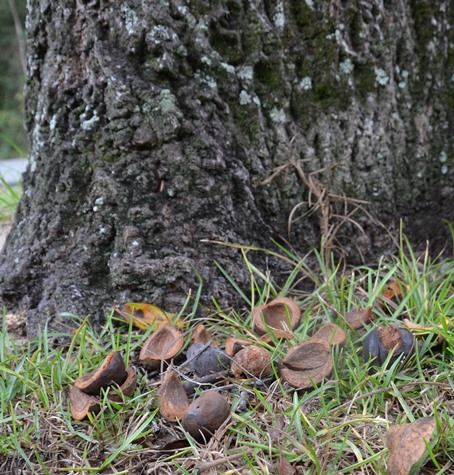 Hickory nuts are popular with squirrels in the autumn.

There is a lot to be gained from having a tough reputation. Only those with a stout disposition or lack of good sense will dare to make a challenge to the individual who hold this distinction.

Unbending, rigid and durable are descriptors which invoke a firm, if not dogmatic, state of resiliency. With this enviable identity, many compare themselves and some assimilate the traits they most admire.

Andrew Jackson is a good case in point. The seventh president grew up on the frontier, dueled with enemies, and commanded an army during the War of 1812 where he was given the nickname Old Hickory.

Like Jackson, hickories are native to North America and are highly valued for their long wearing qualities. While this president no longer visits north Florida, there are plenty of hickories growing in home landscapes.

There are three hickories in panhandle Florida, bitternut, mockernut and water. The water hickory is usually found in wetter areas and the other two species in upland sites.

This genus, Carya, is found in North America and East Asia. The term identifying this genus was coined in Greek mythology and originally referred to a woman who was transformed to a walnut tree.

Karya, or so the story goes, was the daughter of a divinely well-connected king who had gained favor with Apollo. As a courtesy, Karya and her sisters were granted the skill of prophecy from the deity.

As is typical of Greek myths and soap operas, the sisters misused their gift of divination and were punished. Karya was turned into a walnut tree by her boyfriend who was the mythological god of winemaking and ritual madness.

Legendary tragedies aside, hickory trees have a wide variety of contemporary uses commercially and environmentally.

The wood of hickories is relatively hard and is used where a durable and sturdy material are required. Tool handles and flooring are two of the most common uses today.

Prior to the development of modern composite materials, hickory lumber was utilized in vehicle parts, golf club shafts, archery equipment, and a variety of other uses which anticipated hard use. Hickory was originally used to construct baseball bats until ash gained popularity because of its lighter weight.

Hickories are an excellent specimen tree in a landscape. These tall, deciduous trees usually grow from a single trunk and provide excellent shade during the summer.

The leaves can deliver a bright yellow show in the autumn and, if planted on the south side of a home, provide passive solar heating during the cooler months. Mockernut and water hickory nuts have been used in recipes, but are difficult to crack.

One caution is not to establish a hickory near a home or other structure. Squirrels will quickly identify the nuts as a food source and can be quite messy.

Another problem issue is if a tree falls during a storm. The logs are quite heavy and will likely crush anything they hit, especially homes and vehicles.

Hickory is popular and long burning firewood. It is also widely used by bar-b-q devotees who prize the distinct flavor it imparts.
To learn more about hickory trees in north Florida , visit the nearest UF/IFAS County Extension Office or read this infromative publication on the water hickory.