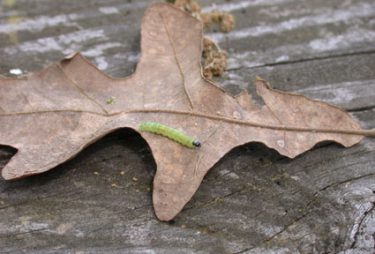 Green Worms in My Yard

If you’ve been raking leaves recently, you’ve probably noticed little green worms hanging from the trees.  They seem to be in abundance this year and can be found crawling on driveways, just hanging around, and maybe even feeding on oak tree leaves.

These green worms that are all over the yard are oak leafrollers (Archips semiferanus) or oak leaftiers (Croesia semipurpurana).  Some people may refer to them as inchworms, however a number of different caterpillars can go by that name.  Leafrollers and leaftiers range in length from 1/4″ to 1″.  The adult form of these insects is a 1/2″ long moth.  The oak leafroller moth is mottled tan and brown and the oak leaftier moth is yellow with brown markings. 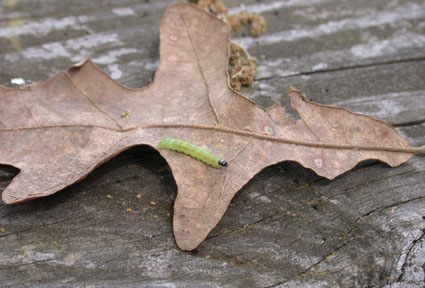 In May, the adults of both species lay their eggs in the twigs and leaf buds of a number of tree species.  The eggs don’t hatch until March of the following year.  When the caterpillars emerge, they feed on the newly forming leaves and flowers of oak, hackberry, pecan and walnut trees.  If they are disturbed, they will stop feeding and hang from a strand of silk.  Oak leafroller caterpillars pupate in tree branches, while oak leaftier caterpillars drop to the ground and pupate in leaf litter.  Adult moths emerge in one to two weeks. 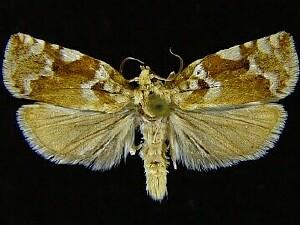 The oak leafrollers and oak leaftiers don’t really do enough damage to be considered pests, but they are a bit of a nuisance.  Thankfully, birds and parasitic wasps will eat and kill the majority of the population.  For in-depth information on most of the interesting insects in your yard, please visit the UF/IFAS Featured Creatures Website. 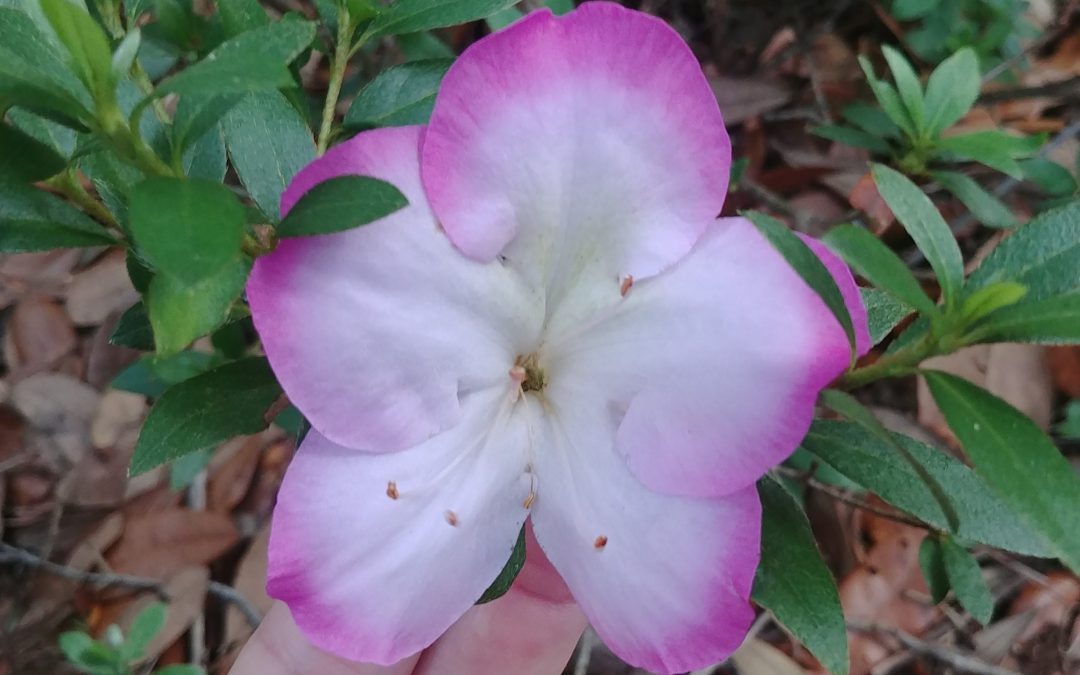 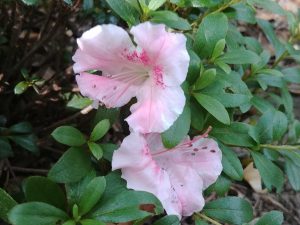 “Satsuki” means “Fifth Month” in Japanese, corresponding to their flowering time in much of Japan. These azaleas were developed hundreds of years ago from their native Rhododendron indicum and R. eriocarpum. The Japanese selected cultivars more for their form and foliage than for flowering. These beloved plants were used in gardens as sheared boxwood-like hedges or pruned into rounded mounds that might resemble rocks or boulders in classical Japanese gardens. Their size and form also made them well adapted for training as bonsai. Most of the Satsuki azaleas in America were introduced in the 1930s by USDA.

Satsuki azaleas are small evergreen shrubs that flower in April and May in north Florida, long after most older type azaleas have finished. Satsuki azaleas also are known for producing large, mostly single flowers up to 5 inches in diameter in colors of white, pink, red, reddish orange and purple. Often the flowers will include stripes, edging, blotches, spots or flecks of contrasting colors (Sometimes all on the same plant!) with more than 20 different color patterns recorded.

Satsuki azaleas have an elegant subtle charm, quite unlike the flashy, over-the-top, heavy blooming all-at-once Southern Indica azaleas like ‘Formosa’ and ‘George L. Taber’. Typically, Satsuki azaleas display a few large blooms at a time, allowing one to better appreciate their size and color patterns as contrasted against their fine-textured, dark green leaves. To make up for a less boisterous display, Satsuki azaleas flower over a longer timeframe, averaging about 8 weeks, with some flowering an amazing 14 weeks. In another contrast, most Satsuki azaleas grow smaller in size, in my experience reaching about 3 feet tall and wide in a five-year timeframe. The rounded to lance-shaped leaves of Satsuki azaleas also are demure, ranging in length from just ½ inch to no more than 2 inches.

Look for Satsuki azaleas in spring at garden centers or year-round at online nurseries. There are hundreds of cultivars but some popular types to look for include:

Gyokushin – 3-in. diameter flowers are predominantly white but with light to dark pink dots and blotches

Tama No Hada – flowers are 4 to 5 inches in diameter and are white to pink with deep pink stripes; usually flowers in fall as well as spring

Wakaebisu – 2.5-in. diameter flowers are “double” (hose-in-hose) and are salmon pink with deep pink dots and blotches; this also flowers in fall as well as spring 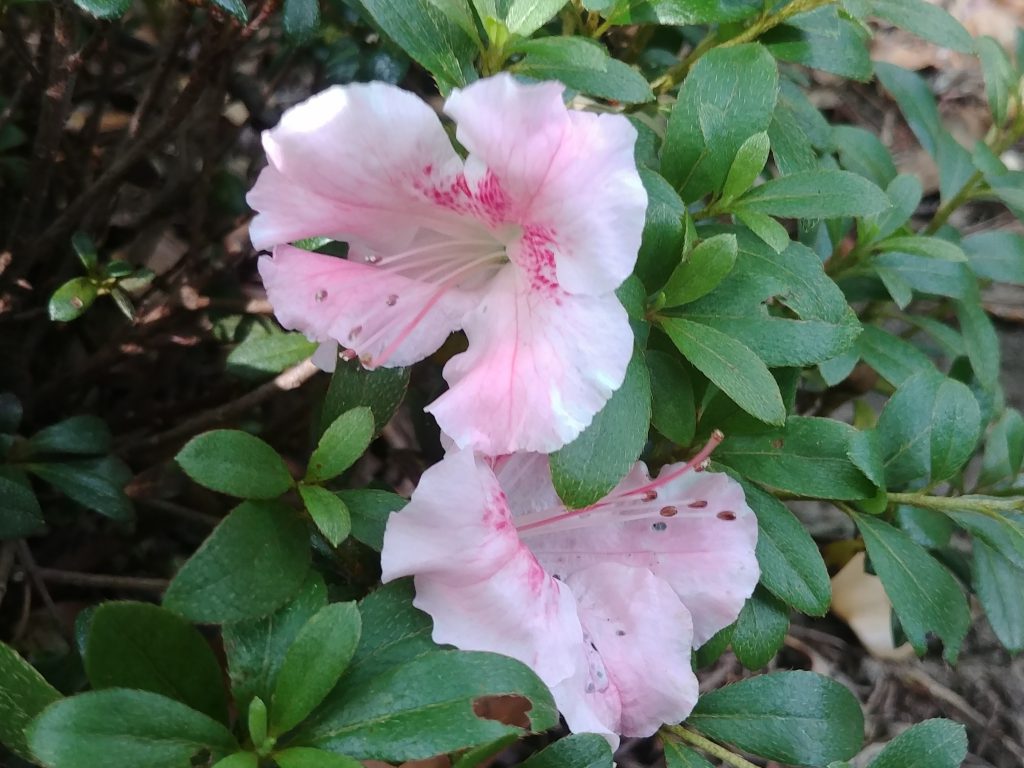 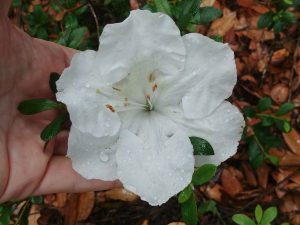 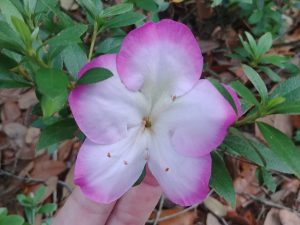 ‘Shugetsu’ has 3-inch flowers that have bright purplish-red border on edges of petals. 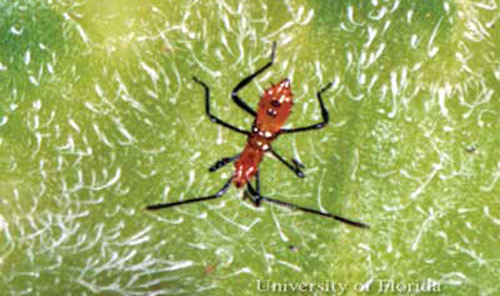 Watch Out for Stinkbugs and their Relatives!

Stinkbugs and their relatives are not always problematic in the flower or vegetable garden, but when they become so, they can suck the life out of our fruits and vegetables, create ugly abrasions, and destroy flowers such as roses. 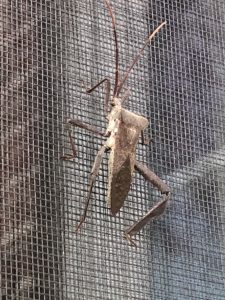 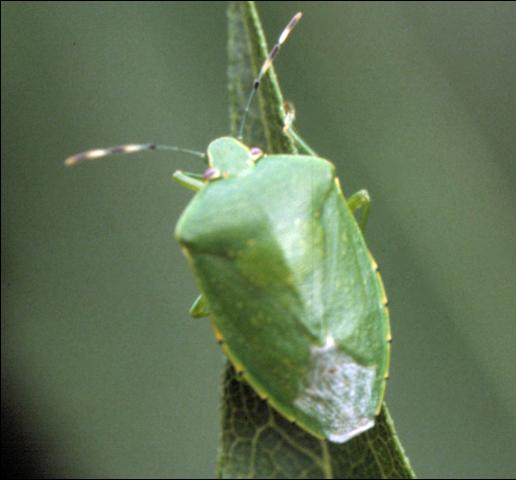 What is a Stink Bug?

The stink bug (Pentatomidae family) is a major garden pest of a variety of fruits and vegetables including squash, peppers, tomatoes, peaches, plums, pecans and a variety of other edibles. They are known as a “piercing and sucking” insect because that’s the way they feed, by using their mouth, or proboscis, just like a needle to pierce the fruit and suck out the juices. This feeding leaves a damaged area of the fruit which may develop discoloration, rot or fungal disease and render the fruit unsaleable or inedible.

Who are “their relatives”

The leaf footed bug, Leptoglossus phyllopus (L), is a relative of the stinkbug and feeds in the same way, has a similar lifecycle and causes similar damage. They are usually slightly larger and have “leaf like” appendages on their legs which are their namesake.

What is their lifecycle?

In Florida, overwintering adult stink bugs will place a clutch, or tight group of eggs, on a host plant early in the growing season. If their preferred plant is not available, they use a variety of weeds and grasses to lay eggs upon and provide food for their young.  After eggs hatch, they go through several nymph stages before they finally reach the adult stage.  Stink bugs have multiple generations in a year, often four to five. They readily move to find preferable food sources and might appear in a garden without warning to feed and cause destruction.

How are they best controlled?

First of all, many stink bugs use weeds as host plants to gather and feed upon, so controlling weedy plants around vegetable and fruit gardens might limit their numbers. If stink bugs are a major problem, planting trap crops, such as sunflowers, is beneficial. Stink bugs prefer to feed on sunflowers more than some other vegetables. This situation can be used to the gardener’s advantage by mechanically killing or spraying stink bugs on trap crops while avoiding treating food crops with pesticides.  More information on trap cropping can be found here.

Additionally, stink bug traps are available. These mechanically trap stink bugs, thus reducing their numbers in the garden, but need to be monitored and serviced regularly. Several species of parasitic Tachinid flies are also predators of stink bugs. These flies lay their eggs on adult stink bugs. The fly larva use the bug as a buffet, slowly killing the bug.

Stink bugs are difficult to control with insecticides, but some measure of control can be achieved at their nymph stage with various approved fruit and vegetable insecticides containing pyrethrins. These products are readily available at local garden centers and feed & seed stores.

For more information, please check out the following resources: