What Caused the Fish Kill Along the Florida Panhandle This Week?

This past week hundreds of dead fish washed ashore between Escambia and Okaloosa counties. Most were of one species but there were others who died and it appeared they had been in the water for quite a while. Determining the cause of fish kill can be tricky. You can observe how many different species were involved, and how many of each species. You can also review changes in the biological and chemical environment of the water system impacted. Fish kills occur for a variety of reasons but many are connected to either a decline in dissolved oxygen, the presence of red tide, or some pathogen that may be affecting the fish. 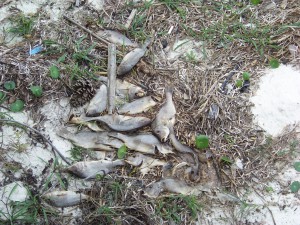 Excessive nutrients, many times associated with heavy rain, can trigger algal blooms that can eventually lower the concentration of dissolved oxygen; however high water temperatures can do the same. When dissolved oxygen levels drop below 4.0 mg/L most fish are stressed, and most fish leave. Some fish however are very sensitive to these changes and die, menhaden are one of them. The Florida Fish and Wildlife Conservation Commission listed menhaden as one of the species found on the beach but there were others as well, actually the majority were scaled sardines. The Florida Department of Environmental Protection monitors dissolved oxygen at the beach each week and their data indicated no problems prior to the kill. The Escambia County Division of Marine Resources measured the dissolved oxygen after the kill and found levels to be normal. Some would point to the abundant amount of green algae, “June grass”, as a sign of an algal bloom but mass amounts of June grass appear each summer and fish kills typically do not follow them.

Red tides are blooms of a particular microscopic single celled creature called Karenia brevis. When these photosynthetic protist are disturbed they can release a toxin which dissipates through the water and can become part of the aersols produced by waves. Many species of fish and marine mammals struggle with red tides and mortality due these outbreaks are common. Records of red tide blooms go back as far as the early colonial period and have been part of Florida for centuries.  They typically form offshore and move inland with the wind and currents. Once they reach shallow waters human released nutrients can increase populations of K. brevis and enhance the problems they cause.  They are more common in southwest Florida but do occur in the panhandle. Agencies along the Gulf coast monitor for red tide outbreaks each week. The Escambia County Division of Marine Resources does so here and found no traces of K. brevis before or after the kill.

As far as pathogens, or another possible cause, we are not sure. The Florida Fish and Wildlife Conservation Commission has officially listed the cause as “unknown”. Fish kill data in Escambia County shows changes over the years. In the 1970’s there were a fewer fish kills reported each year but each kill involved hundreds of thousands of fish, many times menhaden. Today there are more fish kills reported but many of these reports are a single fish or fewer than 10. This is the first large number kill we have had in a while. Escambia County Sea Grant reports water quality information, including fish kills and red tides, for the Pensacola Bay area each week on their website (http://escambia.ifas.ufl.edu).  Fish kill information for the state of Florida can be found at http://myfwc.com/research/saltwater/health/fish-kills-hotline/.  If you have any questions about local fish kills contact Sea Grant at your local county extension office.