Deck the Halls With Boughs of Holly

According to Druid lore, hanging the plant in homes would bring good luck and protection. Holly was considered sacred because it remained green and strong with brightly colored red berries no matter how harsh the winter.  Most other plants would wilt and die. 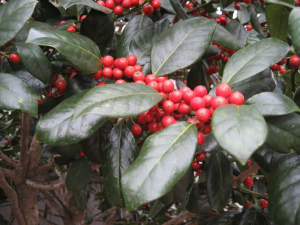 Later, Christians adopted the holly tradition from Druid practices and developed symbolism to reflect Christian beliefs.  Today, the red berries are said to represent the blood that Jesus shed on the cross when he was crucified.  Additionally, the pointed leaves of the holly symbolize the crown of thorns Jesus wore on his head.

Several hollies are native to Florida.  Many more are cultivated varieties commonly used as landscape plants.  Hollies (Ilex spp.) are generally low maintenance plants that come in a diversity of sizes, forms and textures, ranging from large trees to dwarf shrubs.

The berries provide a valuable winter food source for migratory birds.  However, the berries only form on female plants.  Hollies are dioecious plants, meaning male and female flowers are located on separate plants.  Both male and female hollies produce small white blooms in the spring.  Bees are the primary pollinators, carrying pollen from the male hollies 1.5 to 2 miles, so it is not necessary to have a male plant in the same landscape.

Hollies prefer to grow in partial shade but will do well in full sun if provided adequate irrigation. Most species prefer well-drained, slightly acidic soils.  However, Dahoon holly (Ilex cassine) and Gallberry (Ilex glabra) naturally occurs in wetland areas and can be planted on wetter sites.

Evergreen trees retain leaves throughout the year and provide wind protection. The choice of one type of holly or another will largely depend on prevailing environmental conditions and windbreak purposes. If, for example, winds associated with storms or natural climatic variability occur in winter, then a larger leaved plant might be required.

The natives are likely to be better adapted to local climate, soil, pest and disease conditions and over a broader range of conditions. Nevertheless, non-natives may be desirable for many attributes such as height, growth rate and texture but should not reproduce and spread beyond the area planted or they may become problematic because of invasiveness. 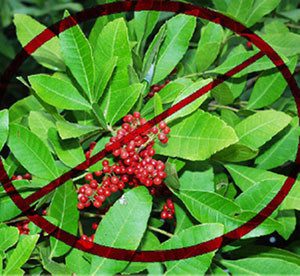 There is increasing awareness of invasiveness, i.e., the potential for an introduced species to establish itself or become “naturalized” in an ecological community and even become a dominant plant that replaces native species. Tree and shrub species can become invasive if they aggressively proliferate beyond the windbreak. At first glance, Brazilian pepper (Schinus terebinthifolius), a fast-growing, non-native shrub that has a dense crown, might be considered an appropriate red berry producing species. However, it readily spreads seed disbursed by birds and has invaded many natural ecosystems. Therefore, the Florida Department of Environmental Protection has declared it illegal to plant this tree in Florida without a special permit. Consult the Florida Exotic Pest Plant Council’s Web page (www.fleppc.org) for a list of prohibited species in Florida.

For a more comprehensive list of holly varieties and their individual growth habits refer to ENH42 Hollies at a Glance: http://edis.ifas.ufl.edu/mg021