Either way it is a fish we all know and love.  Those of us who grew up here on the Gulf coast know this fish as part of our culture.  I remember numerous family gatherings where fried mullet was the order of the day.  Along with grits, baked beans, cole slaw, and iced tea you had your “mullet plate”.  It is the fish of choice for Catholic fish fries during Lent.  It is the icon of the “Mullet Toss” event at the Flora-Bama, which draws huge crowds and people plan for all year.  It almost became the mascot of minor league baseball team.  One my favorites was a story told to me by a colleague who used to teach at the old Booker T. Washington High School when it was on “A” street.  He told me each morning the janitorial staff would catch mullet for the school lunches.  They would have your classic “mullet plate” for lunch everyday – fresh from the bay – how good is that.  It is the fish that “jumps” and everyone knows what it is.

I paddle area waters monitoring a variety of things assessing the health status of Pensacola Bay.  While out there I see a lot of wildlife, but mullet is one of the more common ones.  Wherever I go, open intracoastal waterway, grassbeds, bayous, marshes, even backwater creeks where the water is almost stagnant, I find mullet.  You see their swirls, schools gliding beneath your paddleboard or kayak, I even watched one make unusual circles with its head above water once.  And always the “jump”, they are always jumping.  But I had never really thought much about their biology.  Many folks observe and study more unusual, or problematic fish, like lionfish.  But the mullet slips by the radar.  It is more like… “oh yea, then there is the mullet”, and we do not think of them more than that.

Local recreational and commercial fishermen are aware of their movements and behaviors.  They know when and where they will be at different times of the year.  But I thought I would do some digging and educate the rest of you about this amazing fish who is like part of the family. 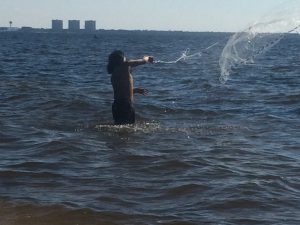 Mullet are euryhaline… meaning they can tolerate a wide range of salinities and can be found in fresh or saltwater.  They travel in schools, feeding off of the bottom.  Their diet consists of bacteria and single-celled algae found attached to plants.  They pick at the bottom, and scrape seagrasses consuming these.

They spawn most of the year, but the peak is between October and December.  Spawning takes place in the open Gulf of Mexico, sometimes far offshore.  They become sexual mature at three years old and can produce 0.5 – 4 million eggs.  Mullet roe (fish eggs) is a local delicacy for some.  They have been reported at an age of 16 years – long time for a fish.

While studying marine biology in college, I remember someone asked our professor why mullet jump.  He paused for several seconds and then replied – “for the same reason manta rays jump”… there was a long pause… so we bit the bait – “okay, why do manta rays jump?”  “We don’t know”.  Classic…

However, they now have an idea why.  It is believed they clean their gills doing this and also oxygenate those gills in stagnant, warm, low oxygen waters that mullet find themselves in periodically. 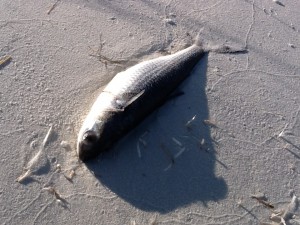 It is truly a magnificent fish.  Their numbers have increased since the 1995 net ban and has become one of the more common fish we see while exploring local estuarine waters.  I certainly will not take them for granted any longer.