It is an amazing product actually… plastic.  It can be molded into all sorts of shapes and forms.  In some cases, it can be more durable than other products, it is lighter and cheaper than many.  Slowly over time, we began to use more and more of it.  I remember as a kid in the ‘60s Tupperware products were common.  Cups and bowls with resealable lids.  Coffee cups followed, then 2-Liter coke bottles, to the common water bottle we see today.  As I look around the room, I am in right now there are plastic pens, picture frames, suntan lotion bottles, power cords, rain jacket, the cover and keyboard of this laptop.  Plastic is part of our lives. 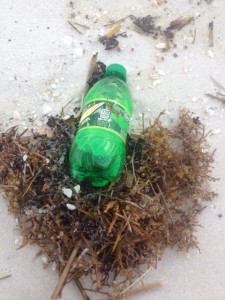 Unfortunately, being relatively inexpensive, it is also easily disposed of.  Many forms of plastic are one-time use.  In some cases, we purchase and discard them without really using them – plastic wrap covering fruit, or the famous plastic grocery bags.  Most of this discarded plastic eventually finds its way into the environment.  Data from the 2017 International Coastal Clean Up, showed that globally all the top 10 items collected were plastic.  Most of it was cigarette butts and items related to food and drink.  Even with all the press, the number of plastic grocery bags collected actually increased.  One study conducted in 2015 estimated the amount of plastic in our oceans would be enough to fill 5 plastic grocery bags for each foot of shoreline of the 192 countries they surveyed.

There is a lot of plastic out there.  One researcher commented… it’s all still there.  Some have estimated that plastic takes about 600 years to completely break down.  Plastic items degrade while exposed to sun, sand, and saltwater.  But they never go away.  They become smaller and smaller to a point where you cannot even see them anymore – these are called MICROPLASTICS.

Microplastics are defined as any plastic items 5mm or smaller in diameter.  Most plastics float, and most microplastics float as well, but pieces of microplastics have been found throughout the water column and even in the deep-sea sediments.  They come in two forms; primary and secondary. 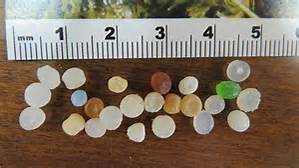 “Nurdle” are primary microplastics that are produced to stuff toys and can be melt down to produce other products.
Photo: Maia McGuire

Primary microplastics are plastics that are produced at these small sizes.  All plastic products begin as small beads called nurdles.  Nurdles are produced and shipped to manufacturing centers where they are melted down and placed into forms which produce car bumpers, notebook covers, and water bottles.  Many of these nurdles are shipped via containers and spills occur.  Other primary microplastics are microbeads.  These are used in shampoo, toothpaste, and other products to make them sparkle, or add color.  As they are washed down our sinks and showers, they eventually make their way into the environment.  Sewage treatment facilities are designed to remove them.

Are these microplastics causing a problem?

It is hard to say whether they have caused the decline in populations of any group of marine organisms, but we do know they are absorbing them.  Studies have found microscopic plankton have ingested them, and some have ceased to feed until they pass them, if they do pass them.  There has been concerned with the leaching of certain products in plastic to make them more flexible in bottled water.  These products have been found in both plankton and in whales. 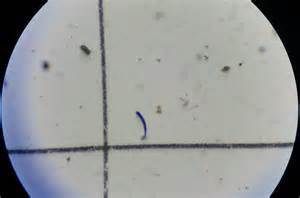 Another problem are the toxic compounds already in seawater.  Compounds such as PCBs, PAHs, and DDT.  It has been found that these compounds adhere to microplastics.  Thus, if marine organisms consume (or accidentally ingest) these microplastics, the concentrations of these toxins are higher than they would be if the microplastics were not present.

–          Pacific oysters had decreased egg production and sperm motility, fewer larvae survived, and the survivors grew more slowly than those in the control population.

A recent summer research project at the University of West Florida found microplastics within the gut and tissues of all seafood products purchased in local seafood markets.  And recently a study of human stool samples from volunteers in Europe and Japan found microplastics in us.  Again, we are not sure of the impact on our health from this, but they are there.

One idea is to remove these microplastics from the ocean – skimming or filtering somehow.  As you might guess, this also removes much needed phytoplankton and zooplankton.

There is the ole “Recycle, Reuse, Reduce” idea we learned when we were in school.  Unfortunately, recycling plastic has not been working well.  Being a petroleum product, the price of oil can dictate the price of recycled plastic.  With low oil prices comes low recycling profits.  In many cases it can be cheaper to produce and purchase new plastic products.  Also, unlike glass, plastic can only be recycled so many times. 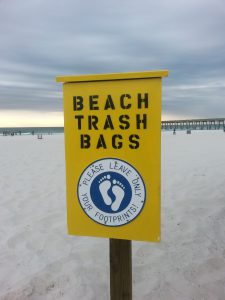 Reuse and reduce may be the better options.  If you must purchase plastic items, try to reuse them.  In many cases this is difficult and the reduce method is the better option.  Reduce the purchase of plastic items such as your own drinking container instead of using the one-time plastic cup at meetings or events.  And of course, reusable grocery bags.  You will have to think on how to reduce some items, but most can be done.