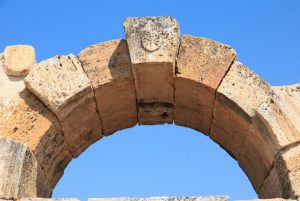 In ecology, a “keystone” species is as crucial to an ecosystem as the central stone in this arch.

In architecture, a “keystone” is the top, central block in an arch structure, the one that holds the entire building up. Without it, the bricks around it collapse. With it, there is nothing stronger.

So, when you hear an animal referred to as a “keystone” species, it should get your attention—especially when that species is listed as threatened by state and federal wildlife agencies. In northwest Florida, one of the species upon which the entire longleaf ecosystem is built is the humble gopher tortoise (Gopherus polyphemus). 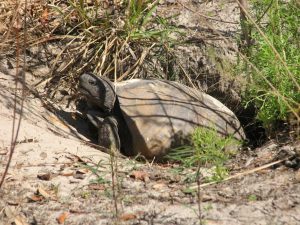 Once hunted for food and currently in competition with humans for buildable land, this long-lived reptile is an architect in its own right. The tortoises are called “gophers” because of their tunnel building and burrow construction expertise. The tortoises spend about 80% of their time near their burrows, of which they have multiple over their lifetimes. Being a cold-blooded reptile, the burrows allow the tortoises a place to live in the temperature-regulated soil.

The average adult gopher tortoise is about 9-11 inches long, although they can be larger. They have thick feet resembling those of an elephant, and scaly front legs used for digging and burrowing. They are tan, brown, or gray, and live in dry, sandy, upland habitats. Their propensity for dry forestland is typically why their populations are in peril, as this is also the best land for building and development.

The average gopher tortoise’s burrow is 6.5 feet deep and 15-40 feet long, and provides habitat for 350 other species! Those commensal species that share its burrow are mostly invertebrates, but at least 50 are larger backboned species like frogs, snakes, rabbits, and burrowing owls. During forest fires, there are stories of multiple species—from deer and snakes and turtles—calling a truce and hiding in the burrows together until the flames blow over. 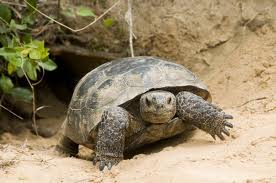 Gopher tortoises are nesting right now–be sure to observe from a distance!

Right now—from May to July—is nesting season for gopher tortoises. They lay eggs in the soft sand of their burrow apron, which is the triangular spread of loose sand at the opening of the burrow. Eggs incubate all summer and emerge between August and November. The newly hatched tortoises can expect to live 40 to 60 years in the wild. They live on a variety of grasses and low-growing plants native to longleaf pine, oak forests, and coastal dunes, including wiregrass and gopher apple. They are adapted to routine fires, as they are safe in their burrows and the new growth after a burn provides an abundance of their grassy food sources.