Embrace the Gulf 2020 – the cephalopods

For many of the blogs we have posted on marine life of the Gulf of Mexico I have used the term “amazing” – but these cephalopods are truly amazing.  There have been numerous nature programs featuring not just marine invertebrates but rather highlighting the cephalopods specifically.  We have been amazed by their looks, their colors, their intelligence, and their ferocity.  They are the animals of ancient mariner legends – the “kraken”. 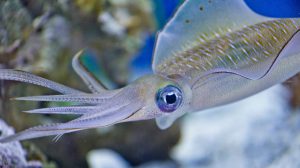 These are not your typical mollusk. The elongated body and lack of external shell changes everything for cephalopods.
Photo: California Sea Grant

But for us who just visit the beach to play and walk – we rarely see them.  They are quite common.  The squid are almost transparent in the water column as they swim and usually run deep until nighttime.  The only ones I have ever encountered were hauled up in shrimp trawls – but they are usually hauled up each time, and sometimes in great numbers.  Octopus are more nighttime roamers as well.  I have occasionally seen them diving during daylight hours, but they are very secretive and well camouflaged.  I have found cephalopods both in the Gulf and within the estuaries – again, they are more common than we think.

A study conducted in the 1950s logged 42 species within the Gulf of Mexico.  Many of them live in the open sea and at depths of 350-500 feet.  There are actually four types of cephalopods – the octopus and squid we know, the cuttlefish and nautilus less so because they are not common in the Gulf region.

They are mollusk but differ from their snail and clam cousins in that they have very little, if any shell.  The nautilus is an ancient member of this group and still possess an external shell.  However, it is chambered and can be filled with gas like a hot air balloon allowing the nautilus to hover off the seafloor – something their snail/clam cousins can only dream about.

The squid and cuttlefish have reduced their shell to a surfboard looking structure that is found internally, serving almost like backbone.  It allows them some rigidity in the water column, and they can grow to greater size.  Actually, the squid are the largest invertebrates on the planet, with the “giant squid” (Architeuthus) reaching lengths of 50 feet or more. 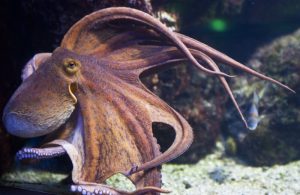 The octopus differs from the squid in that it lacks a shell all together. Thus, it is smaller and lives on the ocean floor.
Photo: University of South Florida

The octopus lack a shell all together.  Without this rigid bone within, they cannot reach the great size of the giant squid – so giant octopus are legend.  However, there is a large one that grows in the Pacific that has reached lengths of 30 feet and over 500 pounds – big enough!

The lack of a shell means they must defend themselves in other ways.  One is speed.  With no heavy shell holding you down, high speed can be achieved.  Again, squid are some of the fastest invertebrates in the ocean – being clocked at 16 mph.  This may not outrun some of the faster fish and marine mammals, and many fall victim to them.  Birds are known to dive down and eat large numbers of them.  But they can counter this by having chromatophores.  These are cells within the skin filled with colored pigments that they can control using muscles.  This allows them to change color and hide.  And their ability to change color is unmatched in the animal kingdom.  I recommend you find some video online of the color change (particularly of the cuttlefish) and you will be amazed.  Yes… amazed. 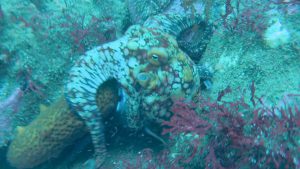 The chromatophores allow the cephalopods to change colors and patterns to blend in.
Photo: California Sea Grant

To control such color, they must have a more developed brain than their snail/clam cousins – and they do.  The large brain encircles their esophagus and not only be used to ascertain the colors of the environment (and how to blend in) but also has the capability of learning and memory.  The octopus in particular has been able to solves some basic problems – to escape, or get food from a closed jar, for example.  Many of these chromatophores possess iridocytes – cells that act has mirrors and enhance the colors – again, amazing to watch.

All cephalopods are carnivorous and hunt their prey using their well-developed vision.  Squid prefer fish and pelagic shrimp.  Octopus are inclined to grab crustaceans and other mollusk – though they will grab a fish when the opportunity presents itself.  Cephalopods hunt with their tentacles – which are at the “head end” of the body.  The squid possess eight smaller arms and two longer tentacles.  Each have a series of sucker cups and hooks to grab the prey.  They keep their tentacles close to their bodies and, when within range, quickly extend them grabbing the fish and bringing back to the mouth where a sharp parrot-like beak is found.  They bite chunks of flesh off and some have seen them bite the head off a mackerel.  I was bitten on the hand by a squid once – one of the more painful bites I have ever had. 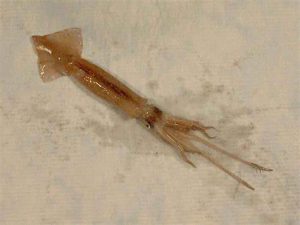 The extended tentacles of this squid can be seen in this image.
Photo: NOAA

The octopus does not have the two long tentacles – rather only the eight arms (hence its name).  They move with stealth and camouflage (thanks to the chromatophores) sneaking up on their prey – or lying in wait for it to come close.  Here things change a bit.  Octopus possess a neurotoxin similar to the one found in puffer fish.  They can bite the crab – inject the venom – which includes digestive enzymes similar to rattlesnakes and spiders – and ingest the body of the semi-digested prey after it dies.  They can drill holes into mollusk shells and inject the venom within.  Most will give a painful bite but there is one in the Indo-Pacific (the blue-ringed octopus) whose venom is potent enough to kill humans.

Making new octopus and squids involves the production of eggs.  The male will deposit a sac of sperm called a spermatophore into the body of the female.  She will then fertilize her eggs and excrete them in finger like projections that do not have hard shells.  Squid usually die afterwards.  Octopus will remain with the eggs – oxygenating and protecting them until they hatch.  At which time they will die.

Though we have a variety of cephalopods near shore – the real grandeur is offshore.  Out there are numerous species of bioluminescent cephalopods – most living at 500 feet during the day and coming within 300 feet at night.  Many swim, while some float, others have developed a type of buoyant case they can carry their eggs in.  Far too much to go into in a blog such as this one.  I recommend you do a little searching and learn more about these amazing animals.