Mammals are historically land-based, or terrestrial, animals.  They are quadrupeds (four legs) and run with a cursorial form of locomotion (backbone moving up and down) – some are the fastest land animals the planet has ever seen.  But as fate would have it, some returned to the sea and occupied niches there.  They are so well designed for a life in water that even look like fish.  However, they differ in several ways:

1)      Their tail extends horizontally instead of vertically and moves in an up and down motion instead of a side to side.

2)      They of course lack scales, but they lack the characteristic hair of mammals as well.  Though some hair may be found if you look close enough, they use blubber (layers of fat) to keep their bodies warm instead.  Due to their warm blooded-ness, many do very well in cold parts of the ocean.

3)      They also have mammalian lungs – not gills.  Amazingly they exchange almost 90% of the air in their lungs with each breath (compared to about 20% for humans).  With this huge load of oxygen, they remain underwater for long periods of time and dive to deep depths.  The record would belong to the sperm whale who can dive to depths of 3000 feet for up to 90 minutes!

There are three orders of marine mammals: The Cetaceans (whales and dolphins), Pinnipeds (seals and sea lions), and Sirenians (manatees and dugongs).  All three were once found in the Gulf of Mexico.  Today there are only cetaceans and sirens, the lone pinniped (the Caribbean Monk Seal) is now believed to be extinct. 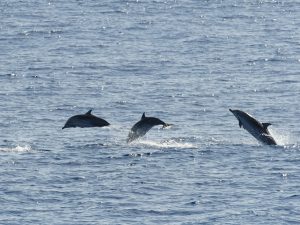 A group of small dolphin leap from the ocean.
Photo: NOAA

The Atlantic Bottlenose Dolphin (Tursiops truncatus) is the most common dolphin seen by visitors in our area.  This lively, playful, and intelligent creature is the one most often seen at aquarium shows.  Dolphins are whales, just small ones, and belong to a group known as “toothed whales”.  They have numerous conical canine-type teeth used for grabbing fish and squid.  Lacking molars, they cannot chew – so they must select prey they can either cut into smaller pieces, or swallow whole as is.

The toothed whales are known for their ability to detect prey using a form of SONAR called echolocation.  Sound pulses are produced by flaps of skin within the blowhole (the nostrils of the dolphin) and exit the animal through a blob of fat in the head called the melon.  Low frequency clicks can travel farther and find the targets, high frequency clicks have smaller range but can tell the dolphin what type of fish it is, and some whales can even produce high enough frequencies to literally “stun” their prey in the water – making it easier to grab.  These “echo’s” or “clicks” are usually above (or below) our hearing range.

Dolphins are very social animals, traveling in large groups called pods.  The pods are typically made of adult females and young, though there are one or two males.  They communicate with each other using sound.  The sounds are produced from the larynx in the blowhole area and are distinct for each pod.  Outside dolphins are usually not allowed within the pod, so dolphins are not always the friendly creatures we perceive them to be – at least to each other.

When mom gives birth to a single calf (though very rare, twins have occurred) she rolls while swimming forward to expel the young – who must quickly surface for it’s first breath.  The other females in the pod usually help with this.  The baby suckles milk from hidden mammary glands which the mom exposes with the calf nudges her side.  The calves stay with their moms for about two years learning the tricks of the trade before the cycle begins again.

These are truly amazing animals.  Read more about dolphins at: 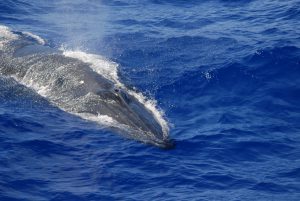 The large head and double blowhole of a Bryde’s whale.
Photo: NOAA

Though dolphins are whales, there are many others.  The order Cetacea is broken into two suborders – the toothed whales (Odontoceti – which includes the dolphins) and the baleen whales (Mysteiceti).  There are at least 20 species of whales and dolphins reported from the Gulf of Mexico – only one of those is a baleen whale, the Bryde’s Whale.  Mammals as a group are known as heterodonts (meaning they have more than one type of tooth in their mouths).  You, for example, have incisors, canines, pre-molars, and molars.  Whales and dolphins break this rule by being homodonts.  The toothed-whales and dolphins have conical canine teeth.  Baleen whales have a fibrous hair-like material in their upper jaw that is stiff like the bristles of a toothbrush called baleen.  The whale swallows seawater and then pushes it through the baleen trapping small shrimp and fish which they lick down their throats.

Whales are known for their long migrations – some of the longest in the animal kingdom.  Their thick blubber and large size allow them to survive in polar waters – where much of their food is found.  However, their babies are smaller (albeit 5-10 feet small) and they are not prepared for such cold waters.  So, mom must migrate to tropical waters to give birth – fatten the baby up with some of the richest milk in the mammal group – and migrate back so she can feed herself.  To navigate they use sound, the Earth’s magnetic field, and their eyes to do so.  Whales can produce very low frequency sounds that can travel thousands of miles across the ocean echoing off objects that may be familiar to them.  They also have magnetite in their retinas that allow them to pick up the Earth’s magnetic field, much the same as a compass does.  And scientists also believe the act of spyhopping, where a whale will stop – turn vertical in the water – and extend their head above the surface – is in fact checking landmarks to aid them.

As with dolphins – these are amazing animals.  Read more at: 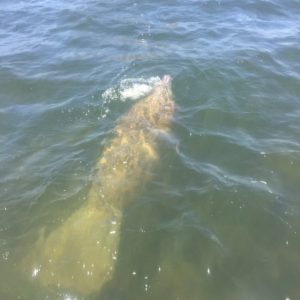 “Mermaids”… at least that was what Christopher Columbus thought when he reached the new world.  I guess they have that body shape… I guess.  These are marine mammals but are not related to whales and dolphins.  Instead, their closest living relatives are elephants.  This is because mammals are divided into orders based on the type, and number, of teeth they have – and manatee teeth are nothing like dolphins.  They have square shaped molars with ridges on the upper surface for grinding plant material – they are vegetarians.  Most herbivores, like horses, have large incisors that can cut the grass and then move them back to their gnawing molars.  Manatees lack these incisors.  Instead they use their large lips, much the same as an elephant uses its trunk, to extend – and grab the grass, pulling it from the bottom of the bay and then gnawing with those big molars.

The differ from dolphins in other ways:

2)      They lack a blow hole – but do still have nostrils.  They are positioned closer to where ours are so they must extend part of their head out of the water in order to breath.

4)      They also do not tolerate polar waters very well.  There was one species – the Stellar Sea Cow – that lived in Alaska, but this animal was MUCH larger than the tropical manatee – large size allows you to maintain a higher body temperature.  It is now extinct – hunted out by fishermen as a food source while fishing.  The animal was actually named after one of them – Captain Georg Stellar.

5)      They are also not as social – manatees are usually loners except during breeding season and gathering in warm springs during the winter.

That said, they are migrators as well.  They will venture out during the warm months to seagrass beds in the north – including Pensacola Beach – returning to the warm springs of central Florida, or the tropical waters of south Florida, in the winter.  Navigation, in their case, is a bit easier – they are coastal – manatees do not travel out to sea as whales and dolphins do.  They slide along the coastline, eating as they go, enjoying the sun, and avoiding boats.  Locally we see them along the Gulf side, in the Intracoastal, and even up into the bays and bayous of Pensacola Bay as they move from Mobile Bay to and from central Florida.

WE DO HAVE A CITIZEN SCIENCE REPORTING PROGRAM FOR THIS ANIMAL.

If you see one contact Sea Grant Agent Rick O’Connor (roc1@ufl.edu ).  We would like to know – exactly where you saw it, date you saw it, time you saw it, was it alone, and which direction was it traveling.

As with other marine mammals – manatees are amazing to see and can be the highlight of your visit.  We ask that while boating, when you approach shore please slow speed and (if possible) have a spotter looking to make sure you do not hit one of these charismatic creatures.