Along the northern Gulf coast is a string of long-thin sand bar islands we call barrier islands.  They are called this because they serve as a barrier to the mainland from open water storms.  These long sandy islands are very dynamic and constantly shift and move with the tides, currents, and waves.  They can shift as far as 300 feet after a strong hurricane.

The white quartz sand beaches of the barrier island in the northern Gulf of Mexico.
Photo: Molly O’Connor

Life on these islands can be very tough.  In addition to the constantly moving sand, there is salt spray in the wind, intense sunlight much of the year, high winds at times, and little rainfall to provide freshwater.  Even though our area can receive as much as 60 inches of rain a year, much of this falls in the northern end of the counties, and not on the beaches.  That said, there are freshwater ponds on some the islands and even larger dune lakes in Walton County – there life is not as hard.

As you cross a barrier island from the Gulf to the bay, you will cross distinct environmental zones.  These zones are defined by the abiotic factors wind and salt spray and are named by their dominant plant forms having distinct animal life associated with them. 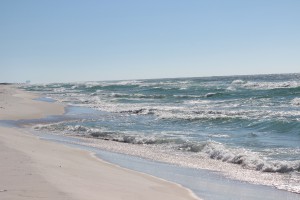 The beach zone seems life-less but it is not. Look beneath the sand.
Photo: Molly O’Connor

The beach is barren.  This is the section of sand that extends from the water line of the Gulf to the first line of dunes.  Few, if any plants can grow here.  The high wave energy will not allow plants to grow along the shoreline, nor in the water itself.  The wind and salt spray are high and the sand ever changing.  All of the animal life here lives beneath the sand.  They emerge when the wind and waves have slowed and scavenge on what they can find for food.  Their primary production comes from the decomposition of the strands of seagrass and seaweed that line the shore – what we call wrack.  Many will filter phytoplankton from the water as the waves wash in and seabirds are constant predators.  When conditions get a little too much, they migrate a little offshore in deeper water to wait it out.  But here fish and larger invertebrates become predators – so, they may not stay long. 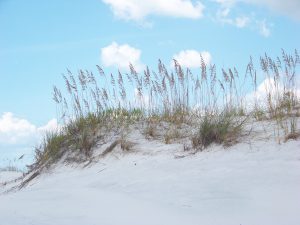 The primary dune is dominated by salt tolerant grasses like this sea oat.

Inland of the beach is the first dune line – the primary dune.  This dune field is dominated by grasses because woody plants cannot tolerate the high wind.  Most of these herbaceous plants have fibrous root systems that trap blowing sand and form dunes.  The dominant grasses found here would include panic grass, beach elder, and the sea oat.  The seeds of these plants provide food for creatures like the beach mice and some birds.  Ghost crab burrows are often found here seeking shelter from the high energy environment of the beach.  And, as you would expect, predators visit.  Snakes, coyotes, and fox seeking the small mice. 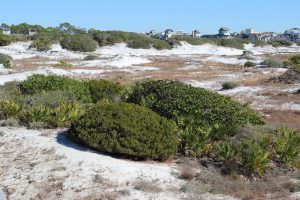 Small round shrubs and brown grasses within the swales are characteristic of the secondary dune field.
Photo: Rick O’Connor

This primary dune line blocks some of the wind and salt spray from the Gulf and allows small woody shrubs to grow.  These shrubs will form a secondary dune system, which may grow slightly higher than the primary dunes.  Shrubs like seaside rosemary, goldenrod, and false rosemary can be found here and give the dunes color when they are in bloom.  The grasses found in the primary dune can also be found here.  Beach mice and ghost crabs can work their way to this environment but because the wind is blocked by the primary dune other animals can be found here including: armadillos, opossum, a variety of snakes, and maybe even a gopher tortoise.  Within the secondary dune field there are low areas that, at times, fill with rainwater.  These are called swales and have their own unique wildlife.  Grasses like broomsedge, needlerush, and bull rush can be found here.  Along the edge you may find carnivorous plants such as the sundew.  Freshwater attracts all wildlife, but the tenants could include a variety of amphibians, reptiles, and even some hardy species of fish. 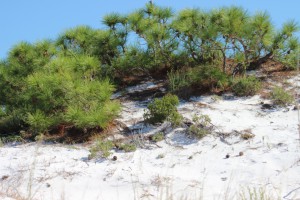 The top of a pine tree within a tertiary dune.
Photo: Molly O’Connor

On the back side of the island are some of the largest dunes.  These are held in place by salt tolerant trees such as live oak, pine, and even magnolia.  However, these trees look different than the ones that grow in our yards.  They are the same species, but their growth seems stunted and often they look like the wind has blown their growth northward.  This is known as wind sculpting and all of it is caused by the salt spray coming from the Gulf.  These trees form a maritime forest where a variety of wildlife species do well.  Deer, armadillo, opossum, skunks, coyote, fox, raccoon, hawks, owls, eagles, all sorts of snakes and woodland birds can be found here.  In these xeric conditions, it is not uncommon to find a lot of cactus.  Most of these creatures are hiding during the day, but at sunset they begin to move.

During these colder winter months, we encourage you to explore these beach habitats.